Comic Books Through the Years — Is the Industry Dying or Thriving, and Where Should You Invest? 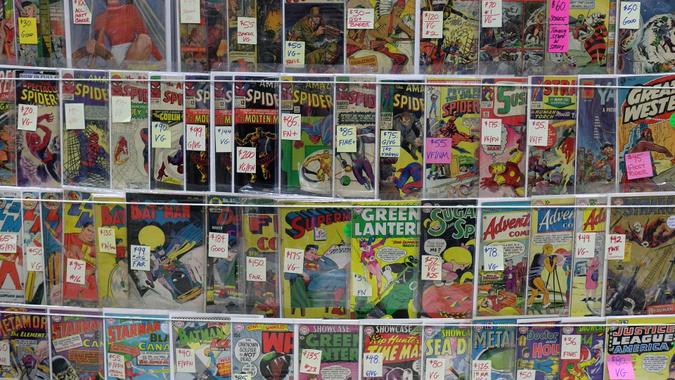 In 2011, the Atlantic wrote an article called “How Zombies and Superheroes Conquered Highbrow Fiction.” Along with undead ghouls, comic book characters had spent the 2000s graduating from juvenile nerd-niche obscurity to a dominant force in mainstream literature. Over a decade later, in 2021, comics are still pop culture heavyweights — and it’s hardly exclusive to literature.

See: How Much Is Awkwafina Worth?
More Net Worth: How Rich Is Elizabeth Olsen?

The highest-grossing film franchise in history is the Marvel Cinematic Universe, whose $23 billion worldwide box office revenue more than doubles that of the No. 2 “Star Wars” franchise. When you include “Avengers” and “Spider-Man,” superhero stories account for three of the top five film franchises. Add “X-Men,” “Batman,” and “DC Extended Universe” to the mix, and they take half of the top 10 spots and six of the top 11.

Superhero films are certainly thriving, but those 10- and 11-figure movie franchises are based on comic books that used to cost a dime. Are graphic novels thriving, too, or did superhero movies rise at the expense of the comic books that birthed them?

Quantifying Comic Book Sales Has Always Been an Inexact Science

Find Out: What Are the 10 Most Expensive Pokémon Cards?

Just one company, Diamond, founded in 1982, distributed nearly all comic books from publishers large and small to retail shops around the country in what came to be known as the “direct market” system. All inventory that Diamond moved from publishers to comic shops was non-returnable, so all copies were counted as sales regardless of whether or not retail customers ever actually bought them.

Today, 90% of all comic books are still sold through independent retail shops, with newsstands and digital services like Amazon Kindle accounting only for single-digits.

According to Publisher’s Weekly, sales of comic books and graphic novels topped $1.28 billion in 2020, an all-time high. It’s no fluke. With a few exceptions — sales fell a little in 2017, for example — comic book sales have been rising consistently for decades.

More: Mario Kart and 18 More of the Bestselling Video Games of All Time

Should You Invest in Comic Books?

Collecting comic books as a hobby is something anyone can do. Investing in comics books as a financial strategy, on the other hand, requires knowledge, skill, experience and a whole lot of luck. Similar to sports trading cards, a handful of ultra-rare and highly coveted comics in mint condition have fetched hundreds of thousands — or even millions — of dollars at auction. A few examples are “Action Comics” No. 1 (the first appearance of Superman) and “Detective Comics” No. 27 (the first appearance of Batman), both of which were worth multi-millions in 2019, according to Superworld Comics.

Also like sports cards, those needles are hiding in an impossibly large haystack. Most comics are literally worthless purely because of the sheer volume that were printed and put into circulation. According to Bookriot, Marvel alone has been publishing comic books for more than 80 years and probably has close to 73,000 characters that appeared in around 40,000 comics.

The good news is, you can invest in comic books indirectly, even if you don’t know the difference between Atom and Ant-Man. According to Forbes, two companies drive the vast majority of the overall market — DC and Marvel, which together account for 80% of all direct market comic book sales. DC is owned by AT&T’s Warner Media Group and Marvel is owned by Disney.

Buying a few shares of AT&T and/or Disney is no guarantee, but it’s probably safer and certainly easier than trying your hand at a collectibles auction.

If you’re looking for something more direct than giant blue-chip stocks, an investment platform called Otis Funds has a fund that invests in collectibles like art, video games, trading cards, sneakers and —  you guessed it — comic books.