Bacon Apocalypse: How a California Law Could Raise Pork Prices Even Higher 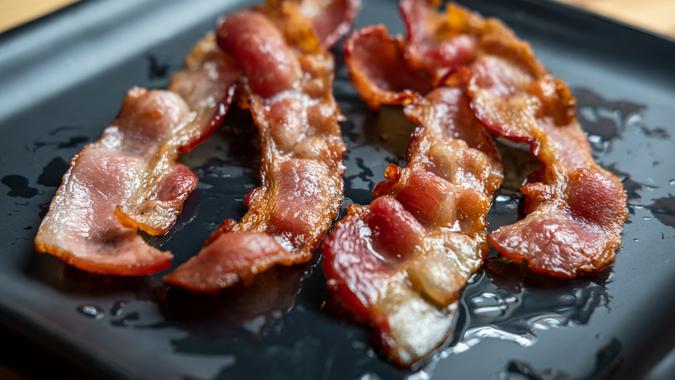 You might soon need to bring home a lot more bacon in order to literally bring home the bacon, as a new animal welfare law in California set to go into effect early next year will likely push pork prices much higher than they already are.

The law, which California voters overwhelmingly approved three years ago, will require more space for breeding pigs, egg-laying chickens and veal calves. Veal and egg producers sound confident they can meet the new standards, NPR reported over the summer. But only 4% of the nation’s hog operations now comply with the new rules.

Beginning on Jan. 1, pork products sold within California must meet standards that mother pigs are given at least 24 square feet of space each to help them move around. They must also be kept out of gestation crates, which are 7-by-2-foot stalls that severely restrict movement, CNN Business reported on Sunday.

Because so few pork producers currently meet that standard, they have sounded the alarm that the new law will hike costs throughout the supply chain. They also say consumers in California and elsewhere will be left with fewer and much more expensive pork options — including bacon, the smoky, salty breakfast staple that secured a place of near-worship among certain gourmands.

This in turn has created a sense of panic and doom — a “bacon apocalypse,” as some have called it. NPR even ran a headline back in August saying, “California’s New Animal Welfare Law Could Mean The End Of Bacon.”

Those sounds you hear are millions of tears sizzling on the griddle.

But some industry observers urge people to chill out, mainly because they don’t see the new law having the massive impact some fear.

As CNN Business noted, economists at the University of California-Davis College of Agricultural and Environmental Sciences estimate that the yearly costs to consumers in the Golden State will be about $320 million. That equals only $8 more per person. They further estimate that consumers in California will only cut their pork spending by around 6.3%.

The impact could be even less severe in the rest of the United States.

“There may be a brief period of disruption, but nothing like the apocalyptic predictions of significant long-term shortages or drastically higher prices,” Richard J. Sexton, distinguished professor of agricultural and resource economics at UC Davis, told CNN Business.

See: Senior Savings: How Exploring Medicare Options Cuts Costs During Open Enrollment
Find: Best Cities To Retire on a Budget of $1,500 a Month

Meanwhile, the pigs themselves will have much better living conditions.

“Some pork producers just won’t let mother pigs turn around,” Josh Balk, vice president of farm animal protection for the Humane Society of the United States, told CNN Business. “That’s it. Everything comes back to that point. And frankly, ordinary Americans think that’s a barbaric way to treat them.”