Costco Is Raising Prices On These 7 Items This Month 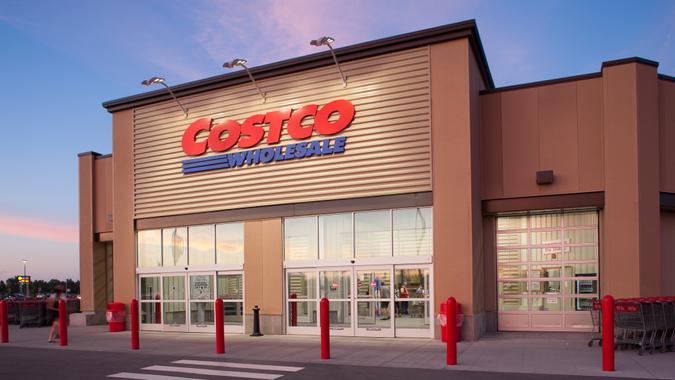 Bulk goods paradise Costco has always been the place to get a bargain $4.99 rotisserie chicken for Monday night dinner and an oversized bottle of vodka for $20 for the weekend — but shoppers beware, some prices are going up this month.

Citing supply chain issues, the overall increase in the cost of goods and an increased number of recalls, Eat This Not That! profiled the unlucky seven items that might give some sticker shock the next time you’re at the store.

The items in question are largely relegated to two main store departments — and many people’s favorite two sections — the food court and the bakery. If shopping all those bulked goods is making you hungry, you can still get the unreal deal of a $1.50 hot dog (which has remained the same price since 1985 regardless of inflation), but you will see a higher ticket price for a chicken bake and fountain soda.

The glorified “hot pocket” filled with roasted chicken and Caesar dressing will now cost a dollar more, increasing from $2.99 to $3.99. And if you want a soda to wash it down, a fountain drink will cost $.10 more, now priced at $0.69 for a 20-oz. cup, though that’s still quite the bargain, especially when you consider Costco’s free refills policy.

Baked goods have been hit the hardest by Costco’s price increases, which makes sense given that the cost of flour is on the rise due to the ongoing Russia-Ukraine war as both countries are two of the world’s biggest exporters of the pantry staple.

The final item that has been seen to go up in price at Costco is Forever Stamps — but you can’t really blame the chain as they are adhering to the costs set by the United States Postal Service, which recently raised the price from $0.58 to $0.60.

Though, many Costco devotees are likely just happy these favorite finds are sticking around as the warehouse giant has been hacking into its inventory in recent years, discontinuing such beloved goods as chocolate-dipped ice cream and even cigarettes.

All things considered, the bulk items at Costco are still a great deal, and as GOBankingRates recently reported, memberships are still a steal, which goes for an annual rate of $60 and has not seen an increase since 2017. Furthermore, as Forbes reports, as of July, the company’s stocks have seen record growth, up 13% in a month, likely due to inflation and customers stocking up on necessary household items.