Costco Rotisserie Chicken Fights Back Inflation to Remain $4.99 – Here’s How 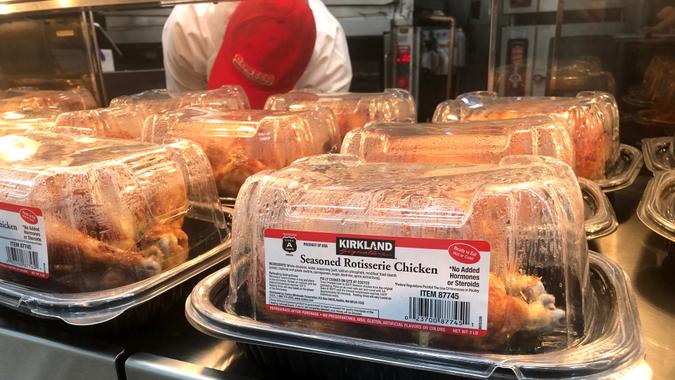 Unless you are part of a rare species that enjoys spending money, prices at grocery stores around the U.S. are strictly for the birds. Except for actual birds, that is.

Money: 50 Ways You’re Throwing Money Away
Find Out: 9 Bills You Should Never Put on Autopay

As the consumer price index and inflation rate continue to rest around 40-year highs, Costco’s immensely popular rotisserie chickens have remained at the affordable price of $4.99 since 2009, regardless of a global pandemic, an avian bird flu epidemic, or any other economic or biological crisis you’d care to throw at them.

And they aren’t the only ones. Wholesalers BJs and Sam’s Club have matched Costco in price (Sam’s offers theirs for a penny less, at $4.98). Superstores like Meijer ($5.99), Giant Eagle ($6.99) and Publix ($7.39) are selling pricier chickens but have remained competitive with the bigger stores and haven’t given in to raising prices to match market rate increases, according to CNN Business.

According to the U.S. Bureau of Labor Statistics, general unadjusted chicken prices have risen 16.4% from April 2021 to April 2022. Although it may mean losing out on millions by resisting to increase the price of rotisserie chickens, keeping regular shoppers satisfied is more important to the stores selling them.

As we’ve previously reported, Kirkland Signature roast chickens at Costco are intrinsically tied to its brand and its customers’ shopping experience. They are more than huge sellers at other stores now too. So, if a wholesale or retail outlet needs to make up the costs of stocking a “loss leader” like roasted chicken by upping other higher-margin items in their stores, that’s just what has to be done, says CNN.

“We have continued to invest in our value proposition. A good example is our signature rotisserie chicken,” explained BJ’s Wholesale Club CEO Bob Eddy during an earnings call last week, per CNN Business. “This strategy of selling low while production costs for rotisserie chickens are high is important to the company and “such a meaningful thing to our members,” Eddy added.

As the market leader, Costco will be able to ride out this price plateau better than its competitors. After all, it has a $450 million, first-of-its-kind poultry complex in Fremont, Nebraska devoted to the production of its rotisserie chickens from farm facility to store.

Discover: The Best Cities To Retire on $2,000 a Month
Read More: 11 Things You Should Never Buy at Walmart

It’s the price you have to pay to sell 106 million delicious 6-pound broilers at $4.99 per year, regardless of what the market dictates.