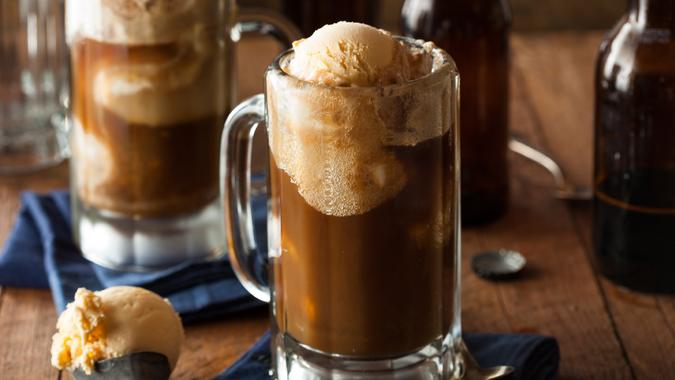 Nothing gets better than a glass of refreshing root beer with a few scoops of creamy vanilla ice cream on a hot summer day. It all began in Colorado back in 1893, when Frank J. Wisner, owner of Colorado’s Cripple Creek Brewing, created the first root beer float after he noticed that the snowy peaks on Colorado’s Cow Mountain looked like ice cream floating in soda. The next day, he combined root beer and vanilla ice cream, creating what he called the “black cow.” Nowadays, it’s known as the root beer float.

The root beer float is an A&W signature treat. To score a free float, stop by a participating A&W restaurant between 2 p.m. and 8 p.m. for a small root beer float. No purchase is required. As part of the celebration, A&W is also encouraging donations for DAV (Disabled American Veterans).

See: Inside the Cola Wars — The History of Coca-Cola and Pepsi’s Rivalry
Find: Corn Flakes, Coca-Cola and 9 Other Beloved Brands With a Twisted History

Hamburger Stand restaurants located in Arizona, California, Colorado and Wyoming are giving out a free root beer float with any purchase. Your free float can be redeemed with a coupon from participating locations with a purchase of any amount. Only one coupon per customer.

Wienerschnitzel restaurants are also running a deal on Friday for a free root beer float with any purchase. To get a free float, go to any participating restaurant to redeem your coupon. One coupon per customer per visit.