Save Money on Grocery Bills With These 5 Vegetarian Tips 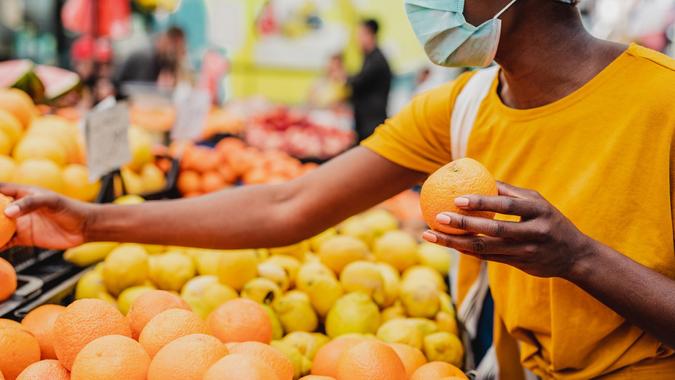 A vegetarian diet isn’t a new phenomenon, but the celebration of the cuisine has seen a surge of popularity in recent years. In 2019, 85% of people surveyed considered themselves meat-eaters. Just two years later, that number was down to 71%.

There are a number of reasons more people are opting for more vegetarian meals, from health benefits to personal dietary and moral choices. One big factor is the cost of meat, which is prompting people to leave it out of the occasional meal, which can result in big savings on your grocery bill.

Look: 6 Household Staples That Are a Waste of Money
More: Here’s How Much Cash You Need Stashed if a National Emergency Happens

Though successfully incorporating vegetarianism into your meal planning, and relishing the resulting savings isn’t as simple as trading meat for a vegetable or two. Here’s a look at some tips on how to effectively save money while eating vegetarian.

Pick an Affordable Base

For anyone looking to take an occasional break from eating meat, make sure you’re switching it out with an affordable option. While there are more fake meat products out there than ever, some of the lab-grown meat and other pre-produced substitute products can be as expensive as the real thing. In some cases, it can even cost a little bit more.

While that could certainly change in the years to come if you want to really make sure you’re saving, know what to focus on. Foods like lentils, legumes, mushrooms, products like tofu and, of course, vegetables themselves can be swapped in for pennies on the dollar compared to meat.

Generally speaking, vegetables costs less than meat, often by quite a bit. Though if you want to make a commitment to eating vegetarian more often, it’s important to know what is and what isn’t in season, otherwise those savings might end up taking a big hit.

Spring is a good time for avocados, asparagus, broccoli, and collard greens. Summer brings celery, carrots, lima beans and summer squash. Come fall, cabbage, kale, green beans and winter squash start coming in, while winter’s known for potatoes, sweet potatoes and beets. With that in mind, you can make a more economic decision before firing up the stove.

Another way to make sure you’re actually saving money by foregoing meat is to stick with what you known — at least at first. Say you’re thinking about cooking a vegetarian Thai meal (of which there are countless options), but haven’t cooked a lot of Thai food before. Before diving in, take a brief inventory to make sure you’ve got some of the ingredients at home. Otherwise, by the time you pick up all the necessary spices, oils and any other specialty ingredient it calls for, you’ll see your grocery bill start to rise again.

Instead, try using a recipe that you already know and likely have all (or at least most) the necessary ingredients at home. As you cook more vegetarian food, you can slowly add to your spices and seasonings and tackle more complex dishes down the road.

Know How To Swap Out Meat

Different recipes will usually call for different types of meat substitutes. Lentils can make a great substitute for ground beef in recipes like sloppy joes and meatloaf. Pasta dishes can benefit from the addition of various types of squash and mushrooms. In a lot of cases, tofu has earned its reputation as the go-to meat replacement due to its versatility. Though if you’re planning to go that route, read up on how to prepare it, as to do so properly can require a significant time commitment.

Meat is also denser with calories and fat-heavy than most vegetables, so it takes less of it to fill you up. This is why it’s common for some people to not feel full after eating a vegetarian meal. The solution is simple, you just increase your serving size to make sure your body’s getting all the calories and nutrients you need. Making sure you’re eating enough can also help those late-night urges to hit up the drive-thru or pizza place later that night.

This is more of a general cooking tip, but swapping out meat in a recipe isn’t exactly a one-to-one transaction. In order to make a meal that’s both delicious and filling, it’s important to know exactly how to substitute any meat it might normally call for. Foods like beans or quinoa aren’t going to have the same type of flavor profile, so they can’t be relied on to carry a dish in quite the same way.

For example, if you’re making sloppy joes, you can swap in lentils for the ground beef. But if that’s all you do, you might not end up being enamored with the end result. You’ll want to rely on adding extra vegetables, seasoning, and sauces to help make a filling, flavorful dish. Keep in mind that the taste and texture of your veggie substitute will taste differently than the same recipe made with meat.

Obviously, there’s no one magic formula here, so tweak the recipes to your own personal taste. Remember, don’t be afraid to experiment. Read different recipes to get different ideas, know what’s in season and like all cooking, don’t hesitate to make each dish your own.