Surging Meat Prices Could Cost You Hundreds This Year — Can You Afford It? 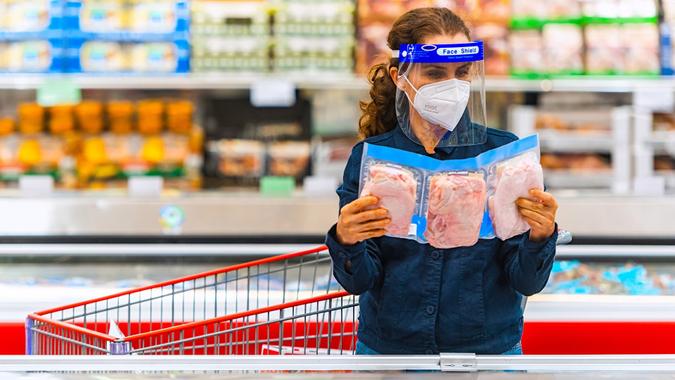 There’s really no other way to say this — prices for beef, poultry and pork have been outrageous this year.

The prices for meat have not only surged in 2021, but have also largely contributed to the overall inflation that is currently at an increase of around 5% from August of last year, the U.S. Bureau of Labor Statistics reported this week.

Prices have increased for common goods overall — including raw materials, gasoline and retail items — but they pale in comparison to the increases in price for basic meat. Basic meat refers to the kind we use in everyday at-home cooking like ground beef and chicken, and excludes higher quality and priced items like steak.

To put things into perspective, the price of chicken has jumped 7.2% in the last year. This means that the chicken you bought for $10 last year is now almost $11. And while the additional 70 cents or so doesn’t seem like much, multiplying it two or three times over over the course of months for an entire family starts to add up quickly. The BLS announced that pork prices also increased 9.8% in the past 12 months, making a pork chop that cost $5 one year ago almost 50 cents more expensive — per chop!

Let’s break down the increase by calculating the cost for a family of four using just chicken and pork alone:

Let’s assume our family above adds 2 pounds of ground beef to their weekly grocery shopping:

This means a family of four needs around an extra $5 per week to buy basic meat items. It also means an extra $20 per month or $240 per year — just on meat alone. These prices do not then include sales tax, higher prices on other items like vegetables, cereals, formula, steaks and so on.

More than 80% of the beef in the U.S. is sold by just four companies, reports NPR. When the pandemic first hit, some of these companies were slow to instill protective measures and became hotspots of infections rather quickly. Some plants were forced to either entirely or temporarily shut down, while others were affected by the global supply chain blockage caused by the pandemic, only furthering the problem here at home.

“Big Meat” as the Biden administration has begun calling it, took advantage of the opportunity. A similar small number of chicken operators produce the overwhelming majority of chicken in the country, and last week the Justice Department announced that the No.2 chicken processor in the country, Pilgrim’s Pride, pleaded guilty this year to conspiring with others to limit production and keep chicken prices artificially high.

Since the market for meat processors and distributors is so highly consolidated, the forces of supply and demand allowed companies to keep prices high during the pandemic. People stuck at home during lockdowns caused the demand for beef and other meats to surge, all while cattle production and chicken plants were forced to slow operations to help curb the spread of infections in their essential workforces.

A cybersecurity attack on one of the big four meat plants, JBS, over the summer demonstrated how vulnerable the U.S. supply system is in such a tight processing market. Over a quarter of the nation’s beef supply was put on hold for almost a week because of a ransomware attack, highlighting how dangerous it is to keep so much of the nation’s processing power in the hands of the very few.

If surging prices are a transitory side effect of the pandemic as the Federal Reserve has been claiming, then prices on everyday meat should taper off soon, too. August’s figures from the BLS showed a slight cooling of inflationary pressures, but were still up over 5% over the year ended August. Whether or not meat prices specifically are kept elevated because of supply chain issues or corporate influence will show in the next several months — but for the average American consumer, something has to give soon.