Why Are Grocery Prices Going Up in 2021? 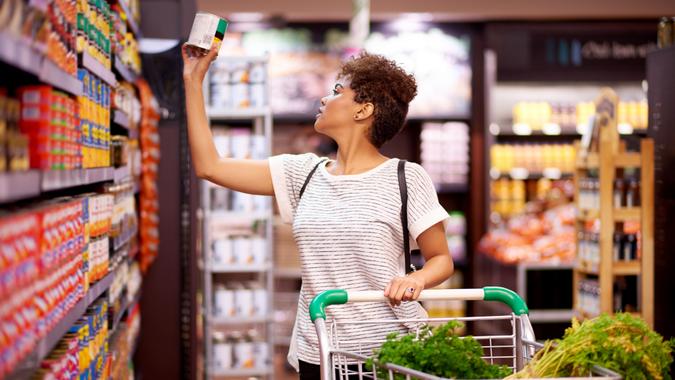 Do your normal grocery purchases seem to be more expensive lately? If you’re feeling the pinch in your pocketbook each time you to the store, you’re not imagining it. From produce to meat, toilet paper to gas, consumer prices have increased 5% since May 2020, according to the Bureau of Labor Statistics’ Consumer Price Index. Even though the economy has been rebounding from the impacts of the pandemic, this level of inflation may persist for some time. Economists surveyed by The Wall Street Journal suggest that inflation is here to stay for at least the next couple of years, predicting an average annual increase of 2.58% from 2021 through 2023. These are levels comparable to those last seen in 1993.

See: Your Morning Coffee Fix Just Got More Expensive — Here’s Why
Ideas: 10 Easy Ways To Save $400 Every Month

What Is Causing Inflation?

For the most part, we have the economic responses to the pandemic to thank for this recent burst of inflation. According to the Wall Street Journal, the Federal Reserve (the central bank of the United States, often just called “The Fed”) takes stock of consumer prices in an index known as the Personal Consumption Expenditures (PCE) index, which includes food and energy. The PCE jumped a significant 5% between May of 2020 and May of 2021. The Fed believes it is a response to “bottlenecks, hiring difficulties and other largely transitory factors” stemming from the effects of the pandemic.

The first culprit of inflation came from panic-induced consumer shopping. According to Vox.com, all of that toilet paper hoarding, grocery prepping and clearing out of supermarket shelves consumers did to feel safe at home created shortages in numerous items, from pasta to paper towels. In addition, high demand for certain grocery items, such as fresh fruit, created situations where demand overwhelmed supply. Strawberries and blueberries, for example, have seen a price increase of 27% and 16%, respectively, as farms have labored to try and meet the need.

Advice: How Should Your Budget Change With Increasing Inflation?
Learn: Where To Invest Your Money When Inflation Is High — And What Investments To Avoid

Additionally, early on in the pandemic, protocols meant to keep workers safe slowed or even shut down parts of the supply chain, causing delays and trouble fulfilling demand, and lost income, that many companies are now trying to recoup through increased prices.

Not every food item increased in price–for example, even though bread making became all the rage during shutdowns, flour and yeast prices fell. As did the price of hard seltzers, despite their popularity. What went up?

Find Out: Are You Spending More Than the Average American on 25 Everyday Items?
Avoid: Costly Mistakes People Make While Grocery Shopping

These increases are also being reflected in prices you’ll pay dining out, in restaurants or take-out, according to Business Insider.

Of course, non-grocery items have also gone up, particularly lumber, as consumers newly working at home suddenly found themselves needing to outfit their homes with office furniture and furniture companies could not keep up with demand, according to Vox. Back in 2019, 1,000 board feet of lumber purchased from a sawmill cost in the $300 range, according to Vox. In May 2021, the same amount of wood was as expensive as $1,500 at some points. It has come down, but not back to 2019 prices.

The repercussions of inflation go far beyond your grocery cart, however. According to the Wall Street Journal, several years of higher inflation has a ripple effect throughout the economy. Not only will your personal budget feel tighter, it effects such things as the housing industry and makes it harder for businesses to succeed.

The Economy and Your Money: All You Need To Know
Defined: What Is Inflation and What Does It Mean When It Goes Up or Down?

Economists are biting their nails in hopes that inflation doesn’t reach 1970s levels, when inflation was so significant it essentially created a recession in the early 1980s, according to Vox.

In response to this inflation that is expected to last longer than the Fed anticipated, Diane Swonk, chief economist at Grant Thornton, told the Wall Street Journal, “The Fed is now likely to raise rates in the first half of 2023, although some Fed presidents will be nipping at the bit to move sooner.”

For consumers, this inflation means it’s a good time to budget wisely, curb your spending and look for ways to scrimp and save wherever you can.