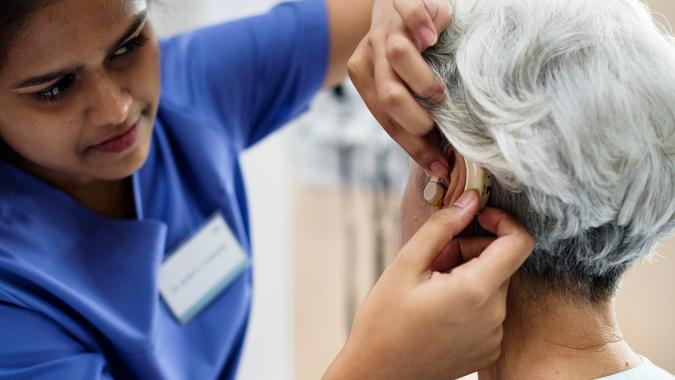 Among the biggest expenses many American seniors are likely to face are medical bills, but a substantial number don’t have nearly enough money saved up to cover them, according to a new survey from MedicareGuide.com. For these Americans, finding alternative solutions is a major priority.

The survey of 1,176 U.S. adults aged 65 and older, conducted in September and released last month, found that 27% of respondents have less than $500 in savings to pay for medical bills. About one-quarter carry medical debt, while more than one-third said they found it either difficult or very difficult to pay for health care. More than one-quarter (28%) said they would have to use non-medical savings to pay for a severe illness — including dipping into their retirement accounts.

On the other side of the spectrum, one in three respondents said they have more than $6,000 in medical savings — a stark reminder of the divergent financial circumstances facing much of the country.

Those without much medical savings face some tough choices when it comes to health care. About one in four U.S. seniors said they have deferred treatment for dental, hearing or vision issues because of lack of funds. Nearly one-third (29%) have had to put off other expenses, such as home repair, to afford health care, while nearly two-thirds (65%) have tried to save on prescription drugs by seeking generic versions or buying in bulk.

Seniors who are struggling to pay for health care can take certain steps to relieve the financial stress — including finding Medicare options that cost less. And now is a good time to look into it, with Medicare’s current open enrollment ending on Dec. 7.

The enrollment period lets seniors add or change their coverage, with any changes going into on effect Jan. 1 — something that could prove beneficial to their bank accounts next year.

“As we enter the fall Annual Enrollment Period it’s a good time for folks to take a close look at their finances,” Jeff Smedsrud, a cofounder of MedicareGuide parent company HealthCare.com, said in a press release. “During AEP people can sign up for Part D prescription drug coverage, change Medicare Advantage plans, and switch between Original Medicare and Medicare Advantage. Cash-strapped seniors may be eligible for plans that offer better savings and coverage than their current plan.”

For example, beneficiaries who only have basic Medicare Part A (hospital) and Part B (outpatient care) coverage might benefit from switching to an Advantage Plan offered by private insurance companies, CNBC reported. These plans have out-of-pocket maximums and typically include prescription drug coverage as well as extras like dental, vision and hearing.

The average monthly premium for Advantage Plans will be $19 in 2022, down from $21.22 this year, according to the Centers for Medicare & Medicaid Services. In some cases you might be charged no premium, though you want to make sure your medical care providers are in-network so all services are covered.

Another important step is to ensure your prescription drugs are covered, either through an Advantage Plan or a Part D prescription drug plan. The average monthly premium for Part D coverage will be $33 next year, CNBC reported, up from $31.47 in 2021. Seniors with limited income might qualify for financial help paying for prescription drugs. They might also qualify for Medicare Savings programs administered through state Medicaid offices.

You can also look into plans offered by the AARP to help cover costs. For example, the AARP Hearing Care Program lets members save 20% on the retail price of hearing aids. Other perks include a free hearing checkup, a free cleaning and check of current hearing aids, a free demonstration of the latest hearing aid technology, a risk-free 90-day trial, a one-year extended follow-up care at no additional charge, a three-year manufacturer warranty and a free three-year supply of batteries.