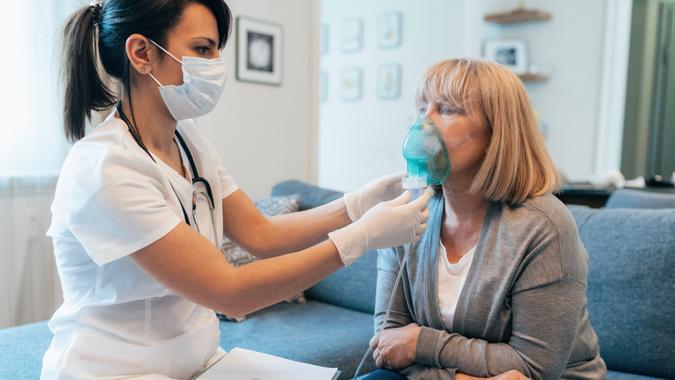 Medicare doesn’t cover everything. In fact, data from The Commonwealth Fund, a nonprofit healthcare think tank, shows that Americans 65 and older were more likely to put off or go without healthcare within the past year because of cost, reported Next Avenue.

“Americans sixty-five and older often simply can’t afford the care and they don’t get the care that they can’t afford,” Gretchen Jacobson, The Commonwealth Fund’s vice president, Medicare, explained to Next Avenue.

Jacobson also noted that the average Medicare recipient only makes about $30,000 a year. However, data from financial services firm Fidelity shows that the average 65-year-old couple may need roughly $300,000 saved for healthcare expenses in retirement.

See: Your HSA Has Benefits Beyond Healthcare — Here’s How to Put Them to Work
Find: Medical Expenses You Can Deduct From Your Taxes

According to Next Avenue, the financial stress for Medicare beneficiaries can be broken down into three categories: the types of care Medicare doesn’t cover, the 20% of bills beneficiaries must pay and premiums. The Medicare system doesn’t typically pay for long-term care and it doesn’t generally cover dental, vision or hearing costs — which can run into the hundreds or thousands of dollars.

While Medicare beneficiaries are having trouble covering these costs, delaying health care could end up being more costly in the long run. “We know that delayed care can lead to delayed diagnoses, so that can result in poor health outcomes and also higher healthcare spending down the road,” added Jacobson.

The costs of Medicare premiums and deductibles are also rising. However, beneficiaries can take advantage of Medicare open enrollment, which begins Oct. 15 and continues through Dec. 7, to explore coverage options. Not taking the time to weigh your Medicare options could be a costly mistake, as previously reported by GOBankingRates, as plans and out-of-pocket costs can change each year.