This Thanksgiving’s Dinner Could Break the Bank 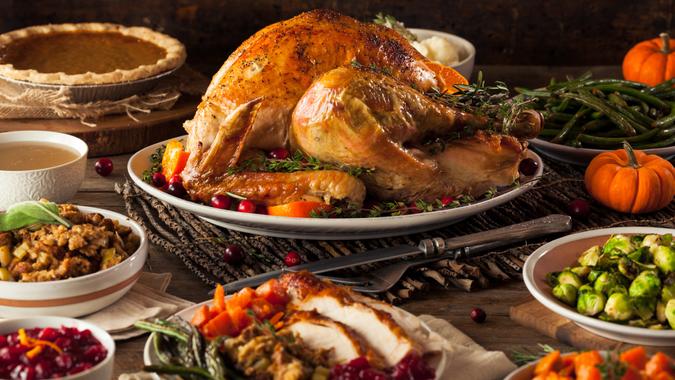 If you want to pull out all the stops for this year’s Thanksgiving feast, with a bird as big as your oven and every side dish under the sun, be prepared to dig deep into your bank account.

See: Expect All-Time High for Holiday Sales Despite Supply Chain Issues and Labor Shortages
Find: 5 Apps That Send Alerts When The Holiday Gift You Need is Back In Stock

This year’s Thanksgiving dinner could be the most expensive in history because of the combination of inflation and global supply chain issues, The New York Times reported this week. Just about everything you need for the traditional Turkey Day meal will be more expensive this year than in years past — not just turkey and trimmings, but everything from pies and coffee to roasting pans, wine and dinner rolls.

That’s because prices have been rising across the board and show no signs of slowing down as Thanksgiving approaches. The Consumer Price Index for September climbed 4.6% from the prior year, while prices for meat, poultry, fish and eggs increased more than 10%.

If you’re thinking about adding beef to this year’s Thanksgiving menu, you might want to think again. As GOBankingRates recently reported, beef prices for beef up a whopping 17.6% over the past 12 months.

Meanwhile, market analysts expect turkey prices to eclipse the record of $1.26 a pound set in 2015, based on the Department of Agriculture benchmark price. One reason turkeys are more expensive this year is because corn prices — which most commercial turkeys feed on — more than doubled in some parts of the U.S. from July 2020 to July 2021.

Food companies such as Nestlé have warned consumers to prepare for sticker shop, while grocery chains like Kroger have similarly warned of higher turkey prices, especially for premium organic and fresh birds.

“When you go to the grocery store and it feels more expensive, that’s because it is,” Veronica Nigh, senior economist at the American Farm Bureau Federation, told CBS Moneywatch.

The American Farm Bureau Federation estimates that in 2020, the cost of preparing the average holiday dinner came to just less than $47 for 10 people or fewer, which was the lowest level since 2010. That won’t be the case this year, Nigh said.

On the bright side, one thing you shouldn’t see is a shortage of the main Thanksgiving trimmings — despite the tight supply chain.

“You might pay more for it than you want, but you will be able to find it,” Nigh said.