Getting Married Later in Life? 10 Questions To Ask Your Partner About Their Finances First 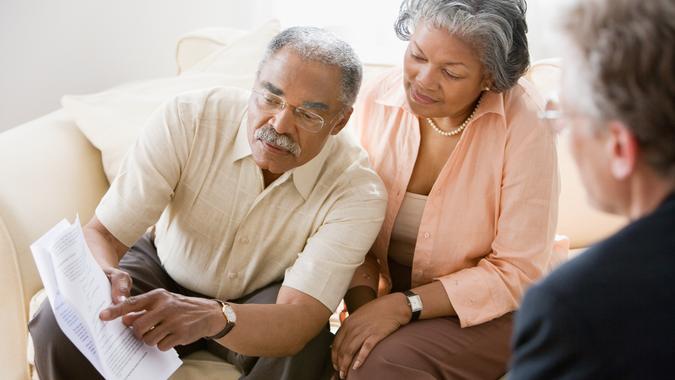 Though walking down the aisle is traditionally thought of as a rite that most couples do in the twenties and thirties, there are plenty of people who marry — or remarry — later in life.

While financial conversations should be had by any couples planning to wed, it’s arguably even more important that older folks have these talks with one another, since they are more likely to be established in life and to have accumulated some individually earned assets.

If you’re “of a certain age” and getting hitched in the near future, you should get ready to have some deep talks about money. And to ask the necessary questions. GOBankingrates has compiled a list of expert-recommended questions to ask your dearly beloved before you say “I do.”

What Did You Learn About Money Growing Up?

“Much of what we learn as children is the basis for what we do as adults,” said Steve Wilson, founder of Bankdash. “You can discover more about why your spouse manages their money in the way they do by inquiring about what they learned about money when they were younger. Additionally, you’ll be able to extend some grace if they make a mistake.”

Can I See Your Credit Report?

“Sharing credit reports allows you to understand both the current state of their finances and their past track record,” said Jay Zigmont, PhD and founder of Childfree Wealth. “You want to know if you are marrying into large amounts of debt. If one of you believes in using debt and the other person does not, it can cause strife in the future.”

Do We Want a Prenuptial Agreement?

“If either spouse had children prior to their upcoming marriage, (a prenuptial agreement) needs to be addressed,” said Kevin Walton, a reverse mortgage loan originator. “Does each spouse combine their assets as community property or do they remain separate? Touchy issues.”

What Do You Tend To Splurge On?

“Everybody has a habit they like to indulge in,” Wilson said. “What is that thing for your partner? Find out. Even though most indulgences are safe, some things might be risky financially. For instance, if your partner has a gambling or shopping addiction, it might have long-term effects. Therefore, it’s critical to comprehend what they splurge on and determine whether you can live without it.”

Do You Want To Merge Bank Accounts?

“There’s no wrong or right response, in my opinion, but it’s important to talk about before getting married,” said Shad Elia, CEO of New England Home Buyers. “Getting married can provide couples a sense of unity and control over their newlywed lives. If you decide to merge, strive to make it easy for both you and your spouse. Pay your bills from a single account so that you can both see the transactions. While combining accounts can be beneficial for certain couples, it can also be problematic for others.”

What Are Your Spending Habits?

“This question is important because it gives you a better picture of what your financial future looks like,” said Oliver David, founder at Green in Black and White. “When you get married later on in life, it’s possible to have acquired quite a bit of debt, but also some amount of savings. Knowing their spending habits will help to determine where you might be financially both in the near and long-term future.”

What Will We Do When We Disagree About Money?

“This question is important because disagreements will come up,” said Ryan Cullen, CEO of Cullen Cioffi Capital Management. “It is not a matter of ‘if’ but ‘when’ — and having a strategy of conflict resolution will save you the headache(s) and possibly thousands of dollars in couple’s therapy. You don’t have to be on the same page about money all the time, but you should be on the same page on how you are going to work through the disagreement and find common ground.”

How Do You Expect To Be Ready for Retirement Financially?

“When making decisions, one of you will be more meticulous than the other,” said Jason Porter, a senior investment manager at Scottish Heritage. “Determine that, and then discuss how you will decide about your assets supporting your retirement life as a unit.”

What Is Your Debt Situation?

“There is good debt and bad debt,” said Kathryn Wakefield, JD, CLU with MassMutual. “Good debt would be student loans or business-related loans as they contribute to better someone’s education or career through business, and those will hopefully help increase the earning potential of your fiancé.  Bad debt would be the equivalent amount of credit card debt or back taxes or any other debt that shows your fiancé may be living outside his or her means.

“That is a signal of how this person handles finances and, as a result, could lead to joint debt after you are married. If the fiancé has a significant amount of bad debt, have a conversation of where the debt came from, how old it is and why that debt was accrued in the first place.”

What Are Your Expectations of Our Roles Regarding Finances?

“It is important to get crystal clear on this so both partners know exactly what each other needs and expects financially from the marriage,” said David A. Fowler, president at High Mountain Financial Coaching. “Both partners in a later-in-life marriage, whether previously married or not, have established a way of doing things financially and have an expectation of how things will change (or won’t change) upon getting married. Clarifying this prior to tying the knot will help to ensure the expectations of both parties are in alignment.”