Advertiser Disclosure
If you’re struggling to build your savings, you might not be investing your money in the right places. Bank products, such as savings accounts, certificates of deposit and money market accounts, offer safe places to stash your cash for shorter-term savings goals. But these accounts aren’t all created equal — some offer higher interest rates that can help you reach your savings goals faster. That’s why it’s important to learn the differences between them.

To find out how well Americans understand the best savings methods, GOBankingRates polled 1,001 adults about their savings goals, which savings methods they currently use and whether they know which bank products typically offer the highest rates of returns. Keep reading to see if you’re missing out on low-risk ways to grow your money faster.

GOBankingRates’ survey discovered that a staggering 96% of Americans aren’t taking advantage of an effective strategy to grow their wealth: building a certificate of deposit ladder. If you’re looking for a safe place to stash your money, you’ll get a higher rate of return with a CD than a savings account or money market account. You can maximize CD interest rates by creating a ladder of CDs. 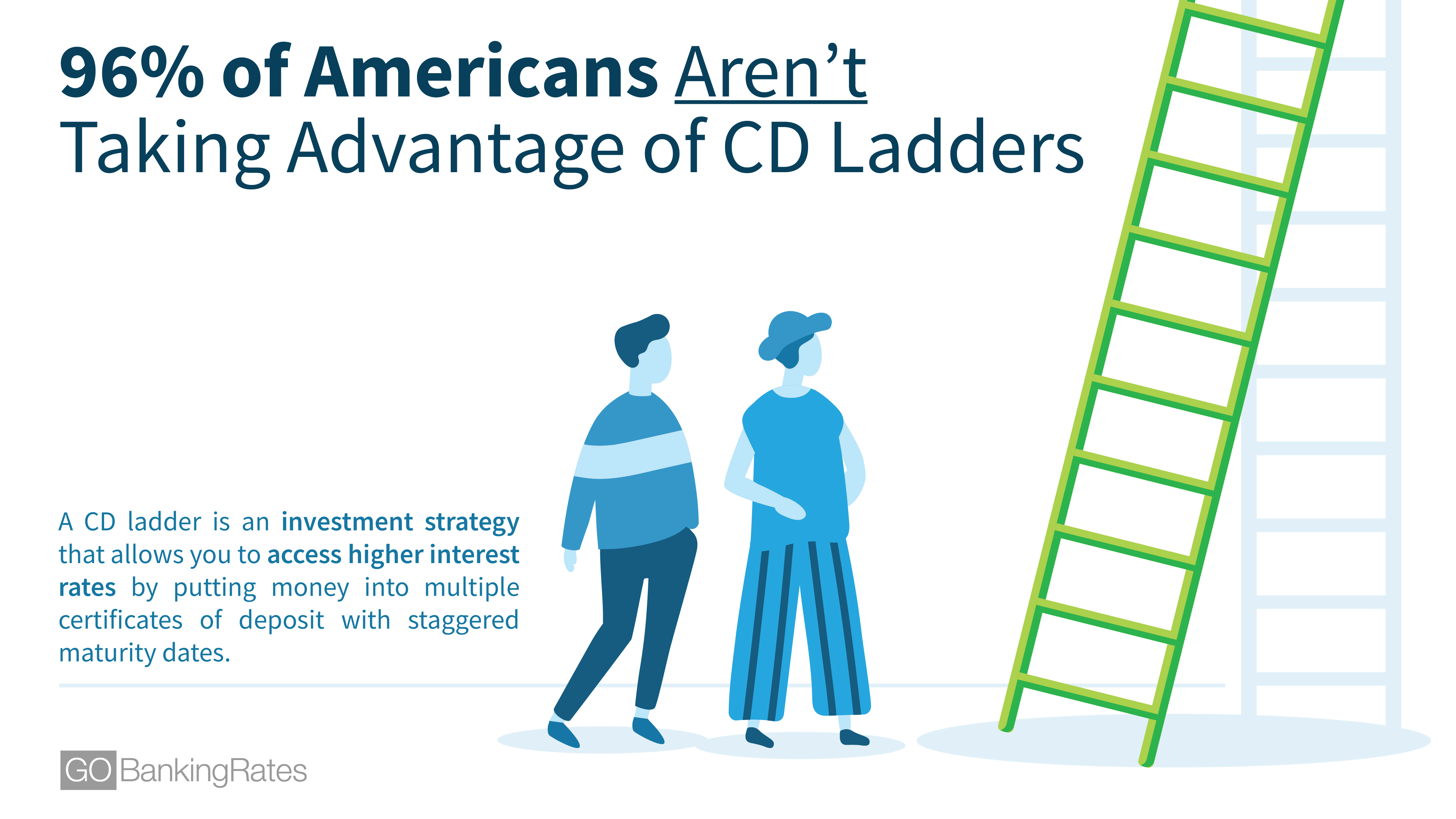 CDs require you to deposit money into an account for a certain period of time — from one month to five years or more. The longer you’re willing to lock up your money in a CD, the higher the rate of return you’ll get. But, if you need the money before the CD matures, you’ll typically have to pay an early withdrawal penalty — unless you opt for a no-penalty CD, which allows you to withdraw your full balance before the term is up if you need it, with no risk of a penalty fee. By using a no-penalty CD, you can take advantage of guaranteed interest rates for a certain length of time, but you’ll still have the flexibility to access your money early, should you need it.

To further allow yourself to access higher interest rates offered by longer-term CDs without locking up your money for years, building a CD ladder is one option. “A ladder of CDs means that numerous accounts are put in place to mature in a sequence over time,” said Neil Stanley, CEO and founder of The CorePoint, which helps banks and credit unions price and sell time deposits. “This produces the yields associated with longer-term savings while still providing frequent access to cash as the series of maturities occurs.”

Survey Question: Are you currently using any of the following savings methods? Select all that apply.


Not only are Americans not taking advantage of CD ladders, but most also aren’t saving money using other common strategies, GOBankingRates’ survey found. Less than one-fifth of Americans said they put money in a savings account reserved for specific goals; approximately 7% of respondents said they’re using a high-yield savings account or money market account. Only 10% said they’re investing in the stock market, which can be one of the fastest ways to grow your money. And, worst of all, nearly 65% of respondents aren’t using any of the savings methods listed in the survey.

But if you want something that allows for easier access to your money than a CD ladder might, a no-penalty CD is worth checking out.

Why It’s Smart To Open a No-Penalty CD Account

Using a no-penalty CD to save and grow your money can be helpful for many cases like emergencies, vacations and big life moments like a wedding. With this type of CD, you’ll lock in a guaranteed high interest rate and get the financial freedom that other savings vehicles don’t offer.

No-penalty CDs, however, offer a nice alternative for your emergency fund compared to both regular savings accounts and traditional CDs. These no-penalty CDs provide higher yields — some are as high as 2.35% APY — and you can put your money away for a certain time period without the fear of a fee should you cash the money out before your no-penalty CD term is up. This way, if you can’t predict when and how much money you’ll need in future situations, you will still be able to earn interest and remove your money from the account when you need it.

Survey Question: How often do you withdraw money for your primary savings account (including any traditional savings, money market, CD or checking accounts)?

Luckily, GOBankingRates’ survey found that nearly half of Americans aren’t raiding their savings accounts on a regular basis. Nearly 26% of respondents said they never withdraw money from their primary savings account, and 21% said they only make withdrawals in emergencies.

“By accepting a higher-yielding contract and understanding the consequences of needing to get some cash out if necessary, you can often ‘have your cake and eat it too,'” Stanley said. “The wise saver weighs their options today and in the future and follows a disciplined strategy knowing what a deviation from the original plan might cost.”

The survey found that Americans might not be growing their wealth effectively due to one simple reason: 55% of respondents said they don’t know which bank products typically have the highest interest rates. On top of that, a majority of respondents don’t have higher-yielding accounts such as savings accounts, CDs or money market accounts. 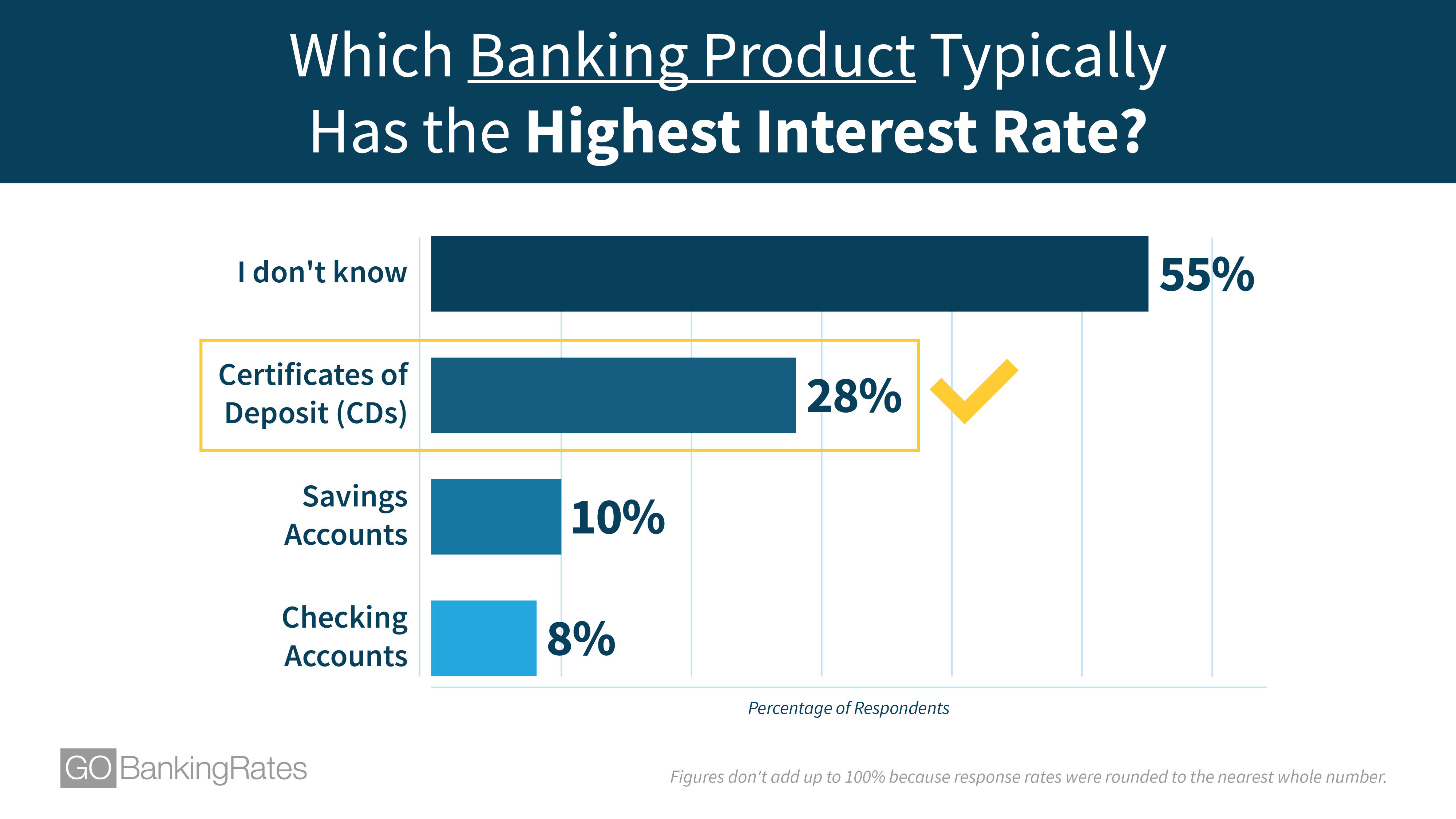 However, among the respondents who claimed to know where to find the best interest rates, the most common response — and the correct one — was a certificate of deposit. On average, CD rates are higher than interest checking and savings account rates. Even better, the best CD rates can be three to four times higher than the national average rate of 0.66% for 12-month CDs. For example, you can get a no-penalty CD with an annual percentage yield as high as 2.35% — meaning you can take advantage of top CD rates without paying a penalty when you need to withdraw your money.

Other Saving Alternative: What is a Savings Bond?

Survey Question: Do you have money in any of the following types of bank accounts?


The survey found that millennials ages 25 to 34 were the least likely to know which banking products typically have higher interest rates. Additionally, this age group, as well as members of Generation Z ages 18 to 24, had higher percentages of respondents without any type of bank account at 39% and 41%, respectively.

Americans Can Reach Savings Goals Faster With the Right Strategy

GOBankingRates’ survey found that Americans are saving for a variety of things, particularly for emergencies and retirement. The third-most common thing that respondents are saving for is a vacation. 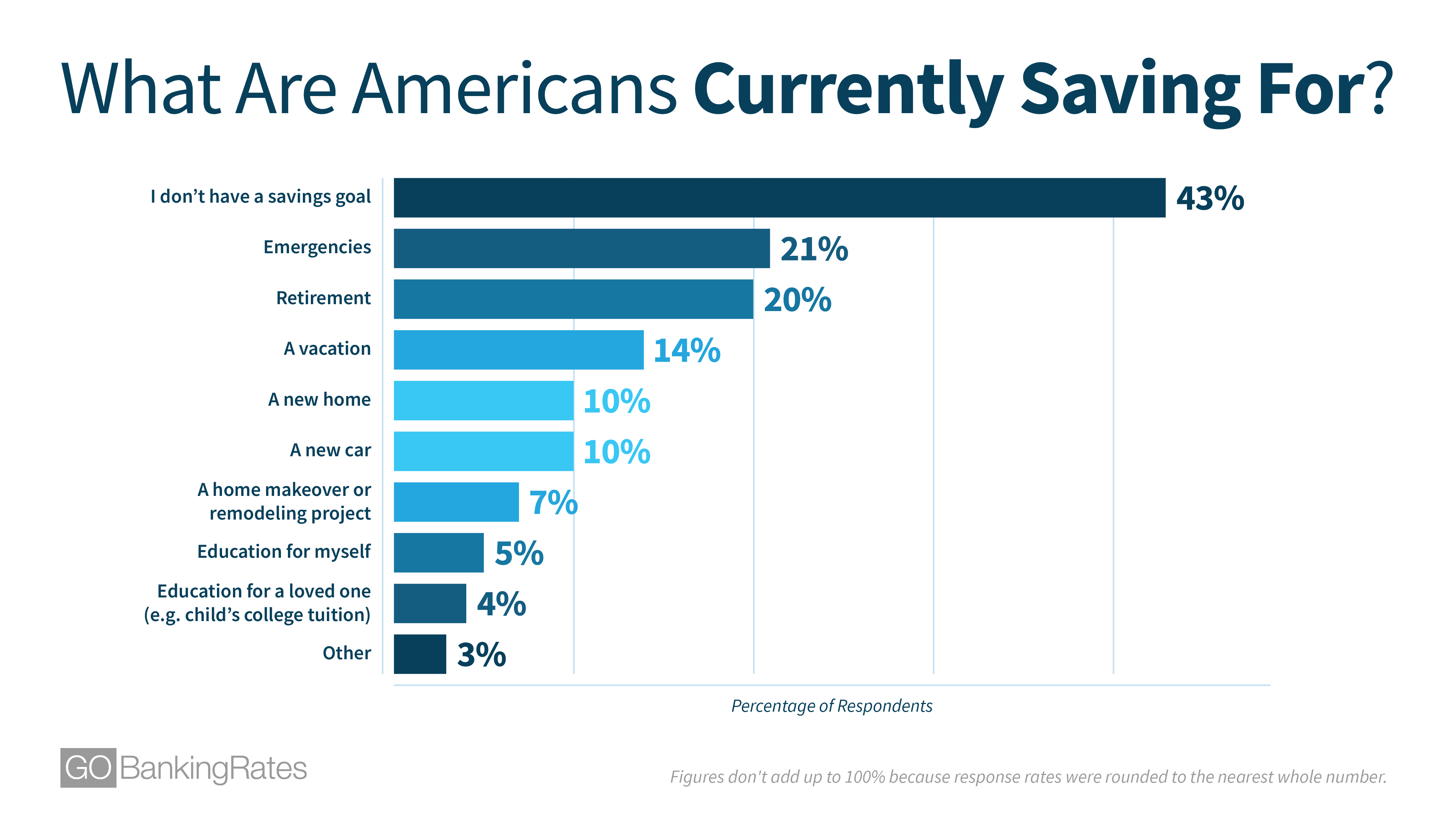 When asked how long it’ll take to reach their savings goals, respondents were most likely to answer 15 months or more, with more than one-third choosing this time frame. Less than 12% of respondents estimated that only six months or fewer are needed.

Survey Question: By your best estimate, how much longer will it take for you to reach your savings goal?


Americans might be able to reach their financial goals faster by choosing banking products with higher interest rates. “You see a lot of people who have left their funds in low-yielding savings instead of accepting a higher yielding term contract,” Stanley said. “The problem with that is every day that passes, they forego potential earnings.”

Click through to read more about how women can keep their money safe.

Methodology: This survey was commissioned by GOBankingRates.com and conducted by Survata, an independent research firm in San Francisco. Survata polled 1,001 online respondents between May 24, 2019, and May 28, 2019. Respondents were reached across the Survata publisher network, where they take a survey to unlock premium content, like articles and e-books. Respondents received no cash compensation for their participation. Survey respondents were asked six questions: 1) Do you have money in any of the following types of bank accounts? Select all that apply; 2) Which one of the following banking products do you think typically has the highest interest rate? 3) Are you currently using any of the following savings methods? Select all that apply; 4) How often do you withdraw money for your primary savings account (including any traditional savings, money market, CD or checking accounts)? 5) What are you currently saving for? Select all that apply; 6) By your best estimate, how much longer will it take for you to reach your savings goal? Respondents were not subjected to a screener question. More information on Survata’s methodology can be found at Survata.com. 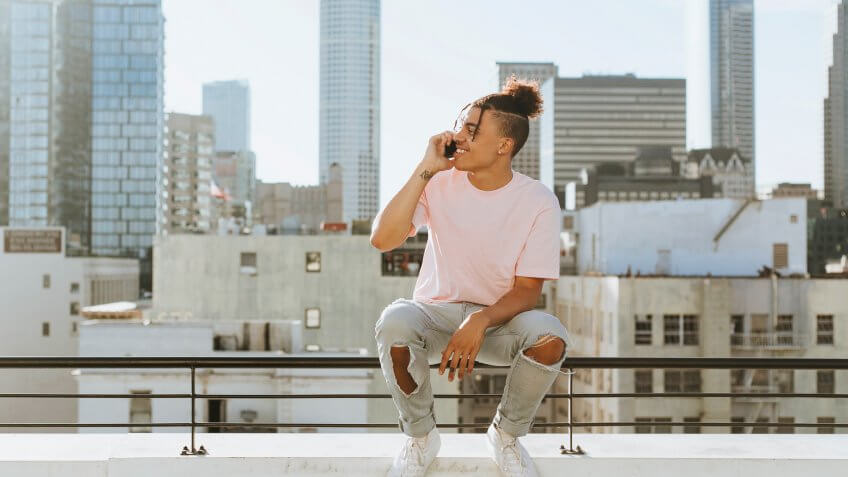 The Savings Needed To Live On Your Own Across America

In some cities, moving out on your own might seem impossible.