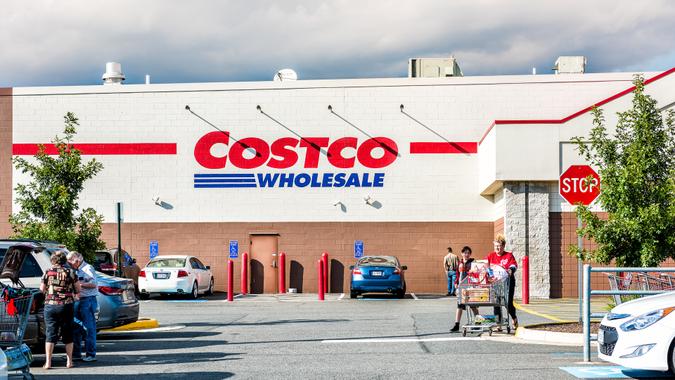 Costco’s numbers are downright impressive. The warehouse chain had sales of $192 billion in the 2021 fiscal year at its 836 stores — nearly 700 of them in the United States and Canada. The membership warehouse has 116.6 million cardholders and 195,000 employees in the U.S. stores. Obviously, Costco is doing something right.

Also See: Do’s and Don’ts of Dollar Store Shopping
Discover: This Credit Score Mistake Could Be Costing Millions of Americans

While it is known for its delicious — and cheap — rotisserie chickens, Costco offers customers many reasons to sign up for a membership and do a good chunk of their shopping there. Think about the bulk discounts, the unique items and great prices on things like tires.

But Costco also has figured out a few tricks along the way to get you to put a few more things in your cart than planned each shopping trip.

What are some of Costco’s secret money traps?

Many of the ways Costco entices you to spend more money are based on the layout of the store, putting you in contact with items you never intended to buy on your trip to buy milk and frozen pizza. The layout leads to impulse buys, such as an adorable jack-o’-lantern in the seasonal section near the dairy case.

If you can’t resist his toothless grin and decide on the spur of the moment to buy Jack, you’re not alone. A 2022 survey from Slickdeals showed that the average person spends $314 per month on impulse buys. That’s an increase from $276 in 2021 and $183 the year before.

A 2020 article published by Reader’s Digest titled “25 Secrets Costco Employees Won’t Tell You” shares this nugget of information: Costco employees frequently relocate the merchandise so you’ll have to look around to find it.

The salad dressing you bought four weeks ago might not be in the same place when you go to buy it again next week. By having to hunt for the salad dressing, you just might come across something new that you hadn’t intended to buy and plop into your cart.

The Front of the Store

Costco puts some of its more expensive items at the front of the store and puts its items with the best prices at the back of the store, Reader’s Digest reported. The front-of-the-store items could be on your wish list for down the road but not in today’s budget. Costco is banking that you won’t be able to resist the merchandise in the front and you’ll plop it in your cart. With the average store size of 146,000 square feet, you’ll walk past many tempting items.

And About That Cart

Costco sells stuff that comes in big boxes — sets of dishware or pots and pans, for starters — that your local supermarket doesn’t sell, so it makes sense that Costco has bigger carts. And it has for a while. A 2013 report from a San Diego television station said Costco had rolled out newer, bigger shopping carts that featured an extended shelf between the main compartment and the bottom. The carts also were three inches taller. Shoppers also reported the carts were lighter and easier to maneuver.

More room in the cart means more room to fill it. Who wants to walk out of Costco with a cart that looks empty?

Costco isn’t lying or pulling a trick when it says something is available for only a limited time. It isn’t like the store around the corner that has had a “going out of business sale” sign for three years. When Costco brings in merchandise for a limited time only, it lets you know. It’s how you process that information that’s important. If the item, for example, is a football and what appears to be a great price, and you’ve been pondering buying your kids a football for Christmas, you’ll buy it now to preserve the deal. It probably won’t be there the next time you shop at Costco.

Costco sells a variety of items — but the choice of each item is limited. Whereas your local Target might have 20 varieties of body wash, Costco will have less than a handful. Since you’re already there, you’ll pick up what Costco has on the shelf — even if it might cost less at Target.

Costco shoppers recognize it for its basic warehouse look of concrete floors, stacked pallets, metal shelves and the lack of luxuries. That’s all part of the plan, too, Reader’s Digest revealed in a 2022 report. The no-frills look leads the shopper’s brain to think that since the store isn’t spending big on fancy light fixtures or hardwood floors, the savings must be being passed on to consumers. The trick of the mind can lead to increased purchases.