Airfare Could Drop 25% in August — Time To Make Travel Plans? 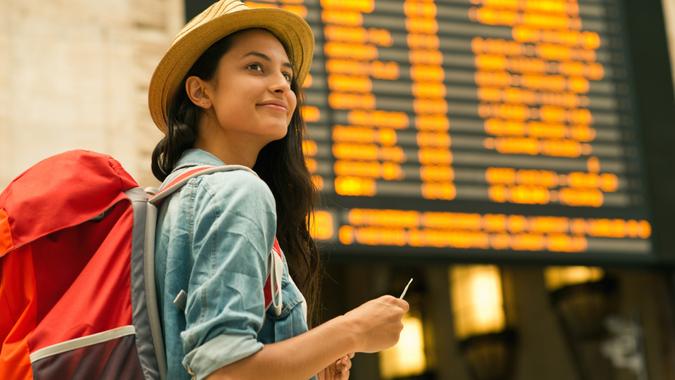 Airfares may be set to drop to 2019 levels, according to the third-quarter travel index from Hopper. The online booking platform reported that the average domestic airfare is set to drop to $286 round-trip later in August, down more than 25% from May 2022. In the spring, peak average prices rose as high as $400, Forbes reported.

See: 5 Affordable and Fun Travel Destinations for Summer 2022
Find: 7 Things You Should Never Do When Planning For Retirement

This decrease follows a busy summer travel season, where nearly 81% of U.S. adults said they had travel plans for the summer, according to a travel survey from The Vacationer. What’s more, almost 45% said they’d travel more this summer than they traveled last summmer, when pandemic concerns continued to hamper travel plans.

Airfares typically drop 10% to 15% between late August and early October, when kids begin returning to school and the summer travel season winds down, according to Forbes. But this year’s plunge is deeper than usual, in large part because fares were higher than normal in May through July.

Berg added that traveler demand also peaked earlier in the summer than usual, causing airlines to reduce prices in August and September to entice travelers.

Prices are expected to rise again in October and November, and the average fare could reach as high as $390 in mid-to-late December as travelers plan visits during what everyone hopes will be a normal holiday season.

Discover: 22 Side Gigs That Can Make You Richer Than a Full-Time Job
Explore: In Less Than a Decade, You Won’t Be Able To Afford a Home in These Cities

Bottom line: If you skipped your summer vacation this year due to rising fuel costs, inflation or any other reason, there’s still time to book a flight for your favorite destination or plan a new adventure. But don’t wait too long, or you could miss the boat — er, plane.