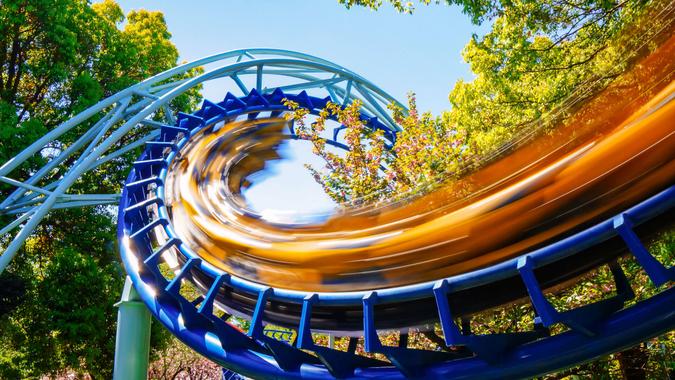 Each year, theme parks across the country roll out new roller coasters and attractions to entice thrillseekers and ride enthusiasts to pay a visit. But the cost to ride can vary greatly depending on the park.

Here’s a look at how much it costs to visit these highly anticipated new rides and attractions.

Read: 13 Insider Secrets From Travel Agents That Will Save You Money
See: 21 Mistakes That Can Blow Your Budget While Traveling

The ArieForce One coaster — slated to open later in 2022 — features 16 airtime moments, four inversions and a first-ever raven-truss dive. It will also boast the largest zero-G stall in America.

Check Out: The Best Ways To Save on Hotels

Glenwood Caverns Adventure Park officially broke ground on its upcoming Defiance roller coaster in August 2021. The record-breaking coaster will feature a 3-degree freefall — the steepest freefall in the Western U.S. — and sit 7,160 feet above sea level, making it the highest looping roller coaster in America.

Your Stay: 35 Things Your Hotel Will Give You for Free

With a 75-foot near-vertical drop, the newly opened Dr. Diabolical’s Cliffhanger is the world’s steepest dive coaster in the world. Six Flags has rated the thrill level for this roller coaster as “maximum.”

Driving? How To Save Money on Rental Cars for Your Upcoming Trip

This Emperor penguin-inspired coaster will be the tallest, fastest and longest dive coaster in California when it opens on March 12. It will feature a 14-story facedown vertical drop.

Guardians of the Galaxy: Cosmic Rewind

This attraction — set to open in the summer — will feature a planetarium-like exhibition and the the first-ever reverse-launch Disney coaster.

Learn More: The Top 10 Best Travel Hacks To Save the Most Money

The just-opened Ice Breaker is SeaWorld’s first launch coaster. It features the steepest beyond vertical drop in Florida — a 93-foot spike with a 100-degree angle.

Iron Gwazi will be North America’s tallest and fastest hybrid coaster when it opens on March 11. It features a 206-foot peak, a 91-degree drop and top speeds of 76 miles per hour.

When it opens on March 25, Pantheon will be the world’s fastest multi-launch roller coaster with four launches and a top speed of 73 miles per hour. It also features two inversions, five air-time hills and a 95-degree drop.

This boat ride attraction will feature 17 scenes that combine cinematic projection with immersive sets and animatronics.

Set to open in the summer, Wonder Woman Flight of Courage will be the tallest and longest single-rail coaster in the world. The roller coaster reaches heights of 13 stories and speeds up to 58 miles per hour.

Photo Disclaimer: Photo is for representational purposes only.