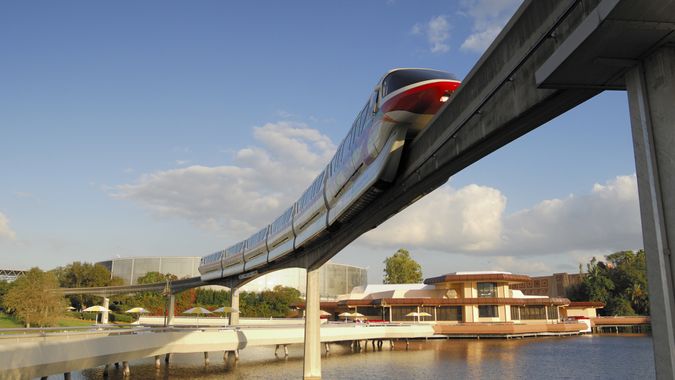 Walt Disney World opened in October 1971, and fans will undoubtedly flock to Central Florida to celebrate the golden anniversary. But what if you don’t want to wait until October? As travel restrictions have eased amid the coronavirus pandemic, Disney World is open for business, with Mickey and Minnie ready to greet visitors — presumably while maintaining a social distance.

Tips: How To Get Back in the Habit of Budgeting for Travel
Find Out: Disneyland vs. Disney World: Where Can You Get More for Your Money in 2021?

Fifty years ago, admission to what’s now called Walt Disney World Resort was $3.50 — or almost $23 today. Expansion through the years, as well as technical advances even the visionary Walt Disney probably didn’t envision, are among the reasons why a one-day admission now costs a minimum of $109 for adults.

So just how much does a Disney World vacation cost? GOBankingRates looked at the cost of travel, hotel stays and tickets to give would-be visitors a look at just how much it costs to take a trip to “the most magical place on Earth.”

A pre-pandemic study from CheapAir.com said the best deals on airfare pop up 76 days before a traveler wants to fly, so using that guidance, GOBankingRates looked at the cost to fly to Orlando International Airport from six random cities in the United States. These were the lowest available round-trip fares we found, sourced from Travelocity, in that time frame.

These prices might fit the vacation budget for a family of four, except for Albany, the outlier. A smaller airport, Albany has 106 combined arrivals and departures each day, meaning limited capacity. But in Boston, which has about 470 domestic inbound and outbound flights a day, the fare is $195 — a savings of $165 per ticket. If you have a friend willing to store your car while you’re gone, the 180-mile drive east could yield big savings.

Tip: If you live equidistant between two airports, check fares from both. The distance between Chattanooga and Atlanta is 118 miles, but the round-trip airfare to Orlando from Hartsfield-Jackson Airport in Atlanta was $115, or $71 less per ticket.

If you want to rent a car in Orlando for your seven-day trip, prepare for sticker shock. Because rental car companies sold thousands of automobiles when the travel industry came to a halt last year, they don’t have enough cars to fill the demand post-pandemic. That translates to sky-high prices to rent this summer.

How high? Well, for a mid-size car, about $485 for the week, including fees and taxes. If you want a minivan, expect to pay at least $800. That’s before gas, tolls and any add-on insurance fees.

Tip: If you are staying at a Disney Resort hotel, you can take Disney’s Magical Express Service from Orlando International Airport to your hotel. Riding in the motorcoach is free — reservations are required, however — but note the service is being discontinued effective Jan. 1, 2022. The region’s SunRail and LYNX public transit systems can transport you throughout the area if you plan to see sites other than Disney.

Orlando has more than 400 hotels and 125,000-plus rooms, so the region has an abundance of lodging choices. There are more than 25 Disney Resort hotels in what’s called the Disney Resorts Collection, and they are divided into four pricing tiers: Value, Moderate, Deluxe and Deluxe Villas.

The hotels are Disney-themed, to the delight of fans young and old, and you never know when Donald Duck or Goofy might stop by for a visit. And when coronavirus-related restrictions are lifted fully, those staying at the hotels can sign up for a Disney dining plan or have the opportunity to get an early start on the day at the park with entry 30 minutes before opening to the general public.

Staying off-site generally will be less expensive, from the value-priced to the deluxe hotels. Plus, frequent travelers can gain hotel loyalty points or redeem them on their Disney vacation, saving more money.

GOBankingRates checked room rates at Disney properties for the selected travel dates and found that a night at the Value-category Disney’s All-Star Movies Resort costs $155, plus tax, for a standard room. The upgraded Disney’s Coronado Springs Resort, a Moderate-category hotel, is $264 before taxes. A Deluxe Villa, one-bedroom suite at The Villas at Disney’s Grand Floridian Resort & Spa is $945.

Off-site, Hyatt Place Orlando/Lake Buena Vista starts at $102 per night, plus tax, with the Sonesta ES Suites Lake Buena Vista-Orlando priced at $157. Rooms at the luxury Four Seasons Resort Orlando, complete with water park, begin at $837. All are within five miles of Disney World Resort.

Tip: If you’re considering staying at a Disney property, you might save money by contacting the Disney vacations department, where representatives can inform you about specials and package deals. If you plan to book a room off-site, look for special offers, such as stay three nights, get the fourth night free.

It’s time to hit the parks. Because of the pandemic, you must make a reservation to go to Walt Disney World Resort parks. And it comes at a hefty price. A standard ticket starts at $109 for ages 10 and older ($104 for ages 3 to 9), and the actual price depends on the day you visit the park. A higher-demand day will result in a higher ticket price. In the week between Christmas and New Year’s Eve, for example, a one-day admission pass is priced at $159 and $154 for kids.

Disney World has four parks: Magic Kingdom Park, Epcot, Disney’s Hollywood Studios and Disney’s Animal Kingdom. Your admission is good for one park, though Disney offers the “park hopper” option for about $85, allowing visitors to switch parks after 2 p.m.

With so much to see and do, you likely will want to go to the parks for more than one day, and the price drops with each day of your visit. The minimum per-day price for adults drops from $109 to $88, for example, if you purchase a five-day pass. The total cost for one adult and one child? With tax, it’s $910.05.