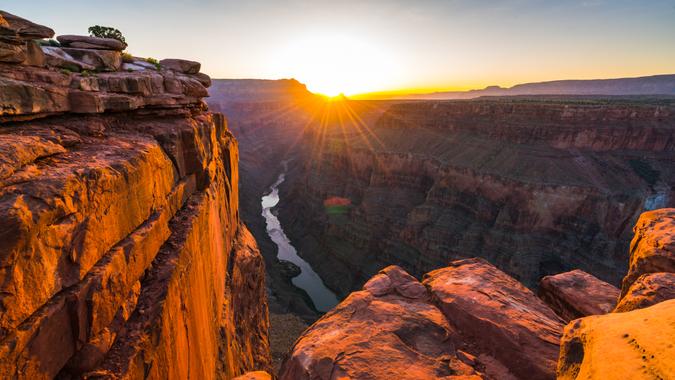 From the mountains to the ocean to the desert to the big cities, the United States has wondrous places to visit from coast to coast. But maybe no location occupies a space on more travel bucket lists than the Grand Canyon.

Erosion from the Colorado River cut a channel through layers of rock somewhere between 5 million and 6 million years ago. Spanish explorers reached the Grand Canyon in the 1540s, and in 1919, the landmark in northern Arizona was declared a U.S. National Park.

The park service reported that 6.38 million people visited the Grand Canyon in 2018 to experience the unbelievable views, hike or take in the stars. With the pandemic forcing a drop in tourism, the number fell to 4.55 million in 2021, but all signs point to visitors returning to the Grand Canyon.

Planning a trip to the Grand Canyon, though, requires research to figure out just what you want to see and do while there — and how much it will cost. After all, at 1,904 square miles in size, the Grand Canyon is bigger in square miles than the state of Rhode Island (1,214 square miles) and almost as big as Delaware (1,982), and there are many different ways to experience it.

And while a trip to the Grand Canyon can be pricey, you can shave some money off the travel bill.

The admission fee to Grand Canyon National Park is $35 per private car, including passenger vans, for a visit of up to seven days. The fee is waived, though, on days the National Park Service has designated as free days.

In 2022, there are five days, with three of them still remaining on the calendar: Aug. 4, the anniversary of the Great American Outdoors Act; Sept. 24, National Public Lands Day; and Nov. 11, Veterans Day. The other free days were Jan. 17, the birthday of Martin Luther King Jr., and April 16, the first day of National Park Week.

Lodging Inside the Park

The national park encompasses what is known as the North Rim and South Rim, and lodging inside the park is limited.

Grand Canyon National Park Lodges, part of the Xanterra Travel Collection, offers six properties at the South Rim, said René A. Mack, the president of Percepture Travel, which handles communications for the hotels.

“Discounts are few, as are packages for lodging in the park,” Mack said. “However, there are the occasional sales such as Christmas in July and the Thanksgiving weekend (Black Friday/Cyber Monday) sales, that tend to offer some discounts to properties in the park, but they are limited.”

Tip: Mack said spring and summer are peak seasons, and it’s wise to book far in advance for lodging. If your heart is set on staying inside the park and you couldn’t get a reservation, check often for cancellations, he said. Winter, fall and early spring are the low seasons and the park is quieter, he said, but recognize the risk of snow.

Lodging Outside the Park

Hotels are limited in the immediate vicinity of the park, too, but you’ll have access to some deals you wouldn’t have when staying inside the park. The least expensive option is to stay in Flagstaff, about 90 minutes south, and drive to the park each day of your visit. But if you want the convenience of staying close to the Grand Canyon, you do have some choices that can help you to save money.

Xanterra’s two properties outside the park — The Grand Hotel and the Grand Canyon Railway & Hotel — both offer packages and discounts often that can be found on the hotels’ websites. And check out the national chains, too, for savings.

“Loyalty programs can also play a big role in driving savings for travelers. Consider participating in hotel loyalty programs to gain access to preferred pricing and premium benefits,” said Dorothy Dowling, the senior vice president and chief marketing officer of Best Western Hotels & Resorts. “For example, Best Western Rewards offers seasonal promotions, guarantees the lowest rate, and allows members to use points towards the cost of their stay even if they don’t have enough points to secure a free night, allowing you to reduce the cost of your trip all while building up points towards future stays.”

Tip: Sign up for browser extensions or services that will offer you money back. For example, a Capital One Shopping popup notified GOBankingRates of savings of at least $49 per night at the national chains while shopping for rooms.

“Make a note of where the free water-filling stations are,” said Diane Vukovic of the Mom Goes Camping blog. “It gets insanely hot at the Grand Canyon in summer and you’ll probably end up drinking a lot more water than you anticipated. Bottled water is sold at lots of places in the park and generally doesn’t cost too much – but all those $2 bottles can add up quickly. Instead, mark where the free water-filling stations in the Grand Canyon are located on a map. It saves you money and is better for the environment.”

Karen Aronian, a parenting and education expert who weighs in on travel for families, recently visited the Grand Canyon. She said to be proactive when it comes to food and necessities to save money.

“You can grab breakfast, lunch or dinner in the canyon at the general store; however, it’s tourist pricing,” she said.

“Before you arrive at the National Park, go grocery shopping to have your ideal backup foods, water, bug spray sunblock, hats, as these will all be double/triple priced once in the gates.”

Also, if you’re a AAA member, remember to ask at hotels outside the park if they offer AAA discounts, Vukovic said. And be sure to take it with you on your trip in case any excursions in the area have a AAA discount.