Staying stateside is often a great way to cut costs while traveling. But vacations in the U.S. aren’t all created equal when it comes to certain expenses.

Important: 13 Insider Secrets From Travel Agents That Will Save You Money
Don’t Break the Bank: Cheap Places To Travel on $100 a Day or Less

After reviewing rankings from a variety of travel sites to determine the nation’s most popular U.S. tourist attractions, GOBankingRates calculated food and drink costs, the average nightly rate for the three least-expensive hotels in the area, as well as airfare averages, to find out which destinations might be the biggest blow to travelers’ bank balances.

Keep in mind that hotel rates are based on October stays, and seasonality can drive prices up or down at some expensive tourist destinations. But even in these swank spots, there are ways savvy spenders can cut costs. Keep reading to see the cheapest and most expensive places to travel in the U.S.

This central Florida theme park mecca is one of the most popular U.S. cities to visit. However, visitors can save even more if they venture outside of its famous parks like Disney World, where they can find plenty of fun and inexpensive things to do.

Portland is known as the City of Roses — and for good reason. To get a look at some stunning specimens, check out the International Rose Test Garden in Washington Park. The site offers free public tours daily.

The best time to visit Phoenix is November through April, according to U.S. News. If you’re lucky, you’ll escape the summer heat and enjoy temperatures in the upper 60s, 70s or even the low 80s.

Traveling to Hilton Head won’t hurt your wallet too much if you’re smart. In fact, it scored pretty well for food and drink costs. You can also check out places like the Skull Creek Boathouse, a unique venue and restaurant that’s a favorite with locals.

Check These Out: 10 Credit Cards To Consider for Travel Rewards

The largest city in the western half of North Carolina, Asheville lies at the confluence of the French Broad and Swannanoa rivers, meaning there’s plenty of beauty to take in. The area’s home to plenty of live music, and you can check out $10 Sunday Fundays at Kolo Bike Park.

You can save money when visiting this expensive U.S. city if you take advantage of free or cheap legendary landmarks. Brush up on your American history at the Liberty Bell Center and Independence Hall. Both are free, although Independence Hall requires tickets for some days and times.

A day at the beach in Miami can be free, but there are plenty of other free places to snag some shade, too. For one, there’s Mac’s Club Deuce, the oldest club in Miami with a two-for-one happy hour good until 7 p.m.

Think About This: Things You Can Get For Free in Every State

To save money at one of the best tourist cities, New Orleans, start your happy hour in your hotel. If you stay in the French Quarter, you can take your drink outside — as long as it’s not in a glass or metal cup — and enjoy it on the way to dinner. If you stock on alcohol at the liquor store rather than buying all your beverages at a bar, you can save some cash along the way.

Atlanta is one of the destinations that is getting cheaper to visit. To save money on transportation during your trip, move around Atlanta with MARTA. One-way fares for the transit system are $2.50 each. Visitors who plan to take the train often might want to invest in a three-day pass for $16.

Even though it’s relatively low on the list, Nashville can get expensive. If you’re minding your pocketbook, look for free or low-cost activities to ease the financial pain. Sample Music City’s offerings at the honky-tonks on Lower Broadway, which rarely, if ever, charge a cover.

To save money when visiting one of the best shopping capitals in America, consider getting a Go Chicago Card. It offers discounts on numerous attractions, including the Field Museum of Natural History, LEGOLAND, SkyDeck Chicago, rides at Navy Pier and more. Savings and pass prices vary depending on which options you choose.

Whoa: Running Disneyland for Just One Day Costs an Insane Amount of Money

The city of Austin is another popular tourist haven, and it’s also known for high hotel costs and airfare. On the plus slide for visitors: Austin has one of the best airports for both local cuisine and live music.

Lake Tahoe might be known as one of the most beautiful winter wonderlands in the U.S., but it’s still beautiful during the fall. Plus, it’s much cheaper than many other popular destinations on this list — with the added bonus of being relatively remote.

San Diego might be a summer destination hotspot, but it can also be affordable in the fall if you’re a smart vacationer. The SoCal city is full of beaches, hiking and biking trails for outdoor enthusiasts. Those looking for a little athletic inspiration can visit the U.S. Olympic Training Center in nearby Chula Vista. It offers guided tours for as little as $5 per person.

Vacationing in paradise doesn’t come cheap — especially if you’re planning to visit Maui. It’s one of the most expensive places to travel this fall, thanks to high airfare and hotel costs. Though it could all prove worth it when you see the scenery in person.

Still Time: 7 Steps To Take for Financial Wellness in 2021

Seattle can be a pricey city to visit — unless you learn how to travel on a budget. For example, skip the taxi and take the Link light rail instead. The line between Angle Lake and the University of Washington includes an airport stop and also has stations at popular sites including Chinatown and Pioneer Square.

Sin City is another famed U.S. hotspot for visitors, and there are many fun and free things to do in Vegas. Take in fabulous fountains and flora for free at the Bellagio, which features a conservatory in addition to its famous fountains. Or, feel free to enjoy a stroll down the infamous Strip and marvel at the street performers and bright lights.

It doesn’t have to be Valentine’s Day for you to visit one of the most romantic cities in the country. When in Charleston, check out the Charleston City Market or take a trip to the Charles Pinckney National Historic Site, a 28-acre remnant of an expansive rice and indigo plantation that dates back to the 1800s.

Among all of the tourist destinations on this list, Denver has one of the lowest airfare costs. That’s not too surprising considering the city boasts one of the most affordable airports in the U.S.

San Francisco is both an expensive place to live and visit. It’s probably no surprise that airfare and hotels are pricey, but don’t forget about food. A meal for two can cost you $95 at a mid-range restaurant.

Palm Springs isn’t just a popular place to retire, it’s also a relaxing place to spend your fall vacation. Save money on your trip by looking for low-cost or cost-free activities. For example, tour the Palm Springs Art Museum for $14 and marvel at the works by Pablo Picasso, Andy Warhol and more. Or, visit the weekly VillageFest, a downtown street fair featuring arts, crafts, food and entertainment every Thursday.

You can find plenty of cheap things to do in Los Angeles during the fall. Strolling Venice Beach is always free. For a less leisurely walk, try hiking through Griffith Park to the Griffith Observatory, which offers free admission and access to telescopes.

Washington, D.C., is one of the most popular U.S. tourist attractions, and you’ll want to make sure you save enough money ahead of time before you visit. From food to airfare, the cost to visit D.C. is high, though there’s no shortage of sightseeing to take in while there.

Unsurprisingly, the Big Apple is one of the most expensive tourist destinations in the U.S. It has the highest cost for hotel stays and meals, which can leave you with less money to spend on attractions, souvenirs and more. To save money in New York City, explore Central Park — it’s fun and (even better) free. The park also offers a variety of attractions, including gardens, fountains, meadows, a carousel and more.

Home to the largest ski resort in the U.S., Park City offers plenty more than steep slopes coated in fresh powder. One example would be the Kimball Arts Center, which is free and open to the public year-round.

When visiting one of the most historic places in America, seek lodging bargains at boutique hotels and bed-and-breakfasts. You’ll appreciate the savings, given that Boston can be as pricey as it is historic.

Read: How Eco-Friendly Travel Can Save You Money in 2021

Fall travelers who want to save time and money when visiting Disneyland should schedule a trip during the off-season — mid-September through mid-November. This is when the park tends to be less crowded. Just avoid it during Halloween time.

If you’re planning a ski vacation, you might want to hit up one of the best world-class ski resorts in the country found in Aspen, Colorado. The Aspen Art Museum offers free admission daily, but the museum is closed until early December. For visitors who want to take a break from downhill skiing and upscale pricing, the Aspen Snowmass Nordic Trail System maintains more than 90 km of free trails linking the communities of Aspen, Snowmass and Basalt.

You can save money on your fall trip to Savannah if you book your travel plans at the right time. When visiting, take a stroll through City Market. It features shopping, dining and other attractions — just watch your spending.

Learn More: How To Save Money on Rental Cars for Your Upcoming Trip

Key West was previously ranked as one of the worst spring break destinations, and it doesn’t rank too well in this one, either. However, the small island does boast a larger-than-life time year-round.

Christian Long contributed to the reporting for this article. 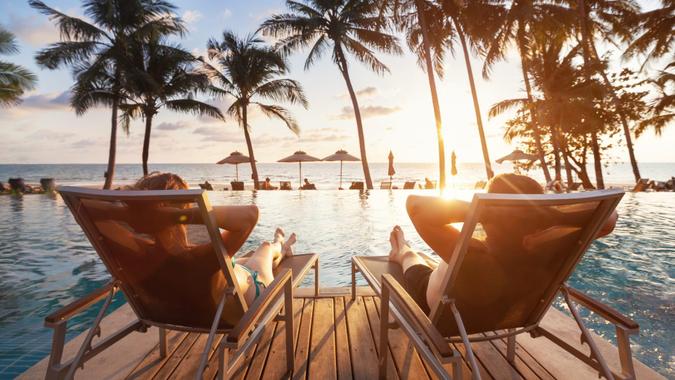 8 Travel Agent Secrets for Saving on Your Late 2021 Travel

It's not too late to score great deals.

> Saving Money > Travel > The Most Expensive Tourist Destinations in the US