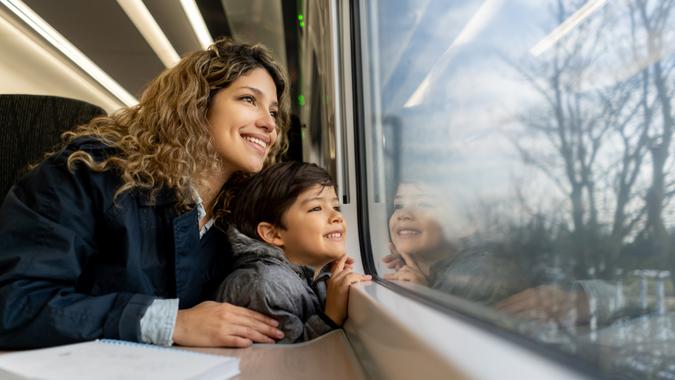 Following so many months homebound during the pandemic, Americans are now traveling like crazy. Summer was a smash hit for the travel and hospitality industry and winter has just been another blowout season for planes, trains and automobiles. According to a recent survey from Tripadvisor, 55% of Americans said they plan to take a trip this winter — up from the 50% who traveled in winter 2020.

Keep In Mind: 13 Insider Secrets From Travel Agents That Will Save You Money
Stay in the Know: Reasons You’re Still Living Paycheck to Paycheck

With some uncertainty still surrounding the ongoing pandemic, trips these days can be stressful. They can also be incredibly expensive — even more so than in pre-pandemic times. Cutting corners is important — but not at the cost of adventure and experience.

GOBankingRates talked to Julie Ramhold, consumer analyst at DealNews to get the scoop on how to save money when you travel, no matter where you’re going.

Book Lodgings With a Kitchen or Kitchenette

“You may pay a little more up front, but you’ll be able to cook more for yourself and eat out less often,” Ramhold said. “At the very least you’ll have a place to put leftovers if you do eat out, which can offer you options when you can’t or don’t want to go out again, and room service is too expensive.”

Travel in the Off-Season (but Be Careful)

“You’ll almost always find better rates when you travel in the off-season, but this is largely going to depend on where you’re going,” Ramhold said. “For instance, you might not want to take a trip to Europe during certain months when many residents take their own vacations as that means things like museums and tour options may be closed down. You’ll save money but you also may find that a lot of the things you wanted to do aren’t available. So choose your off-season travel wisely.”

Read: The Best and Worst Airlines for Cheap Flights

Skip the Alcoholic Drinks (Within Reason)

“Obviously if you travel to certain places, you may want to imbibe,” Ramhold said. “If you’re in Ireland for instance, you might want to have a pint of Guinness just to say you did — but try not to make it a habit as alcohol isn’t something you’re required to have, and it’s often pretty pricey in many locations, which can cut into your budget for other fun things.”

Be Smart About Purchasing Souvenirs

“If you travel often and always buy a souvenir for yourself, friends, and family, then you may end up with more than you know what to do with,” Ramhold said. “Consider buying yourself something special, but don’t go overboard — if you do, you may find that you have to pay extra for your luggage on the way home, as well. But don’t deprive yourself entirely — if you’re in France and you really want to buy some macarons to take home, go for it! But do you really need a shirt that says ‘Paris’ and was purchased there? Probably not.”

“Maybe it’s hiking a trail, checking out a visitor’s center, or watching a street performance, but the odds are good there’s something at your destination you can do for free, or if not totally free, then pretty cheap,” Ramhold said.

Travel the Way Locals Do

“Most residents of your destination are probably walking or taking public transit, and you’ll save money by taking a page from their book rather than opting to take a cab to every single location you want to visit,” Ramhold said.

Drive Time: How To Save Money on Rental Cars for Your Upcoming Trip

“Often in areas that draw tourists in huge crowds, you’ll probably see lots of ads and people who work for local attractions trying to persuade you to visit,” Ramhold said. “And while some of them are absolutely worth it, not all of them will be. Instead of trying out all of these different potential tourist traps, chat with some locals to learn tips for great restaurants and things to see that aren’t on the radar of typical tourists. Not only will you often save money this way, but you’ll end up with a memorable experience, too.”

“If you’re using a credit card and traveling overseas, be sure to check if you’ll be subject to foreign transaction fees because these can be significant and add up quick,” Ramhold said. “If you’re able, opt for a credit card that won’t subject you to these.”

Exchange Currency Before You Travel

“If you’re traveling to a foreign country and want to carry cash, try to exchange some currency before you even board the plane,” Ramhold said. “Local banks and credit unions tend to offer better exchange rates in general, and also won’t necessarily charge exchange fees, offering another chance to save.”