Can You Claim an Adult as a Dependent? Here Are the Rules 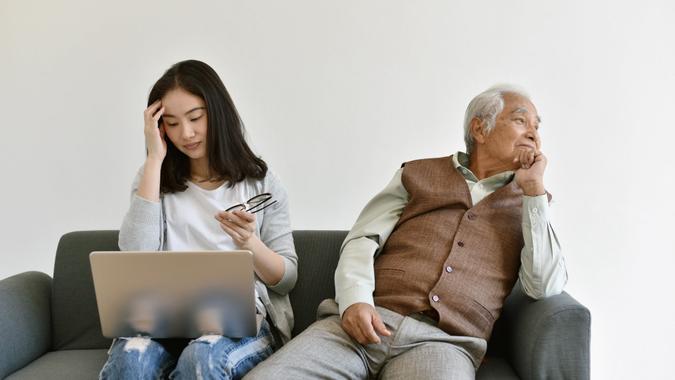 Many people are surprised to learn that you can claim most anyone on your taxes as a dependent. It’s true. Even if you aren’t related, someone who lives with you for most of the year and who you’re supporting financially could ultimately still qualify on your taxes. However, if you’re just learning this, there’s some bad news: the Tax Cuts and Jobs Act (TCJA) phased out the $4,000-plus tax credit that came with claiming a dependent in favor of the larger standard deduction. So, unfortunately, if you’ve been supporting your unemployed, live-in boyfriend for the last decade, you already missed the boat on the biggest tax benefits.

However, while you can no longer get so sizable a deduction, there’s still plenty of tax benefits to claiming a dependent. As such, you should understand what qualifies another adult as your dependent and how those circumstances can work to your benefit. After all, if you are offering crucial financial support to others, you should get the tax benefits you’re accruing for doing so.

So, here’s a closer look at when you can claim an adult as a dependent and why it could be worthwhile.

Who Can You Claim as a Dependent?

A qualifying child does include anyone who is your child — including any adopted or foster children — but it can also include a sibling, stepsibling, half sibling or any descendant of them. However, there are a number of requirements beyond their relationship to you. The person in question can’t be older than either you or your spouse, must be under the age of 19 (or 24 if they’re a student at least five months out of the year), must live with you for at least half the year, must not file their own joint return and must rely on you for at least half of their annual expenses.

This is different, of course, from the $2,000 child tax credit (CTC) which can be applied to any qualifying child under the age of 17. And, should a child be permanently and totally disabled, all age requirements are removed.

A qualifying relative is a much broader category that can include a wide variety of different people in your life who you’re supporting financially. A qualifying relative cannot be your qualifying child or the qualifying child of another taxpayer; they must earn less than $4,200, rely on you for more than half of their financial support for the year and live with you as a member of your household for the year. So, a live-in boyfriend or girlfriend with no income to speak and for whom you’re paying the bills can score you some tax benefits.

Even if a person doesn’t live with you, they can still be a qualifying relative if you’re actually related, and the IRS allows for most of your relatives to qualify. Here’s the list of relatives you can claim as a dependent if you’re supporting them financially, even if you’re not living together:

However, before you start claiming any and all of these on your taxes, note that they would still need to meet the other requirements about their income and how much of their annual expenses you’re responsible for. What’s more, even a qualifying person still can’t be claimed as a dependent if they’re filing a joint return or if they aren’t a U.S. citizen — and you can’t claim a dependent if you yourself are eligible as someone else’s dependent.

Why Would I Claim Someone as a Dependent?

Of course, given how complicated these definitions can get, and given that the hefty $4,000 deduction is no longer an option, some might wonder if there’s enough actual benefit to claiming a dependent. The good news: There are still some clear benefits that can make it worthwhile.

For starters, it’s worth being sure that your potential dependent won’t qualify for that child tax credit of $2,000. That’s especially true since the TCJA upped the income limit for claiming a child tax credit to $200,000 or $400,000 if you’re filing jointly. And even if they’re not, there is a $500 deduction available for adult dependents that’s still nothing to sniff at.

But, perhaps the biggest benefit accrues for those people who can file as a head of household instead of single as it will reduce the overall tax rate you’re paying. In order to qualify, you need to be unmarried, pay over half the upkeep of your home and have a qualifying person live with you for at least half the year. And if that qualifying person is a dependent parent, they don’t even have to live with you.

Here are some common questions people have about claiming a dependent:

Can you claim someone as a dependent if they are over 18?

Yes, a qualifying relative can be of any age provided they meet the other qualifications regarding relationship, residence and income.

What qualifies someone as a dependent?

Generally speaking, a person must not be financially self-sufficient and either live with you or be related to you before you can claim them as a dependent. If you’re not related to your dependent (say a girlfriend or boyfriend), you must live with them.

How much money can someone make and still be claimed as a dependent?

The most a person can earn in a year and still be claimed as a dependent is $4,200.

Does being claimed as a dependent affect my tax return?

Yes, it definitely does. If you’re claimed as a dependent, you cannot claim anyone as a dependent on your own return and cannot be part of a joint filing with your spouse.

Even With a Greatly Reduced Credit, Claiming a Dependent Is Still Worth It

If you’re primarily responsible for another person’s well-being, you should probably reflect that in your tax documents. And even if they’re an adult who’s not directly related to you, they may still be a “qualifying relative” who you can claim at the end of the year. Even though you’re no longer able to claim that hefty $4,000 credit of years past, you can still find significant benefits elsewhere — especially if you can file as a head of household.