Taxpayers who worry their filings are less than perfect have reason to celebrate. According to The New York Times, the chances of being audited by the Internal Revenue Service haven’t been this low in more than a decade.

The New York Times reports the number of people audited by the IRS in 2016 dropped for the sixth straight year to just over 1 million. The last time so few people were audited was in 2004 — when the population was 30 million less than it is today.

The IRS blames the decline on budget cuts. Money for the agency shrunk from $12.2 billion in 2010 to $11.2 billion last year. The agency lost more than 17,000 employees — including nearly 7,000 enforcement agents — over that period, according to The New York Times.

IRS Commissioner John Koskinen said budget cuts are costing the federal government between $4 and $8 billion a year in uncollected taxes. The less the IRS collects from taxpayers, the less it can direct to government projects like defense spending. In his first address to a joint session of Congress, President Donald Trump said he plans to increase the defense budget by $54 billion.

Fewer audits does not mean taxpayers should attempt to cheat on their taxes, however. The IRS collects a lot of information to verify taxpayers’ finances; employers report wages, banks report interest, brokerages report capital gains and lenders report interest. Therefore, most people don’t have much of an opportunity to cheat.

Those in higher tax brackets especially should resist the urge to conceal income or otherwise cut corners on their taxes. According to the The New York Times, the IRS audited 1.7 percent of returns that reported more than $200,000 in income and 5.8 percent of returns that reported more than $1 million in income. In other words, the higher your income, the more likely you are to face a tax audit.

The deadline to file a 2016 income tax return and pay any tax due is Tuesday, April 18.

Up Next: Take Advantage of These 10 Little-Known Tax Deductions 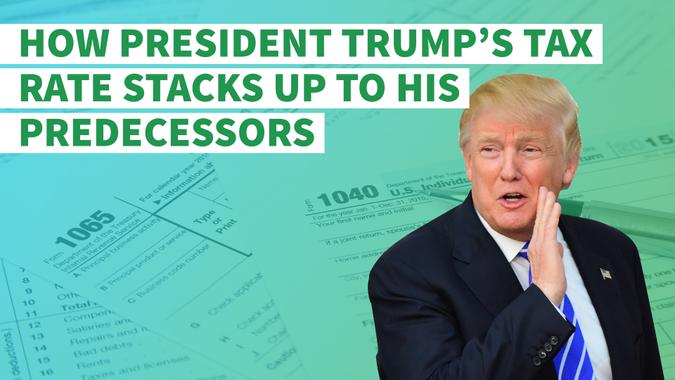 How President Trump’s Tax Rate Stacks Up Against His

Here are the tax rates paid by President Trump, former presidents Obama and Bush and other popular politicians.