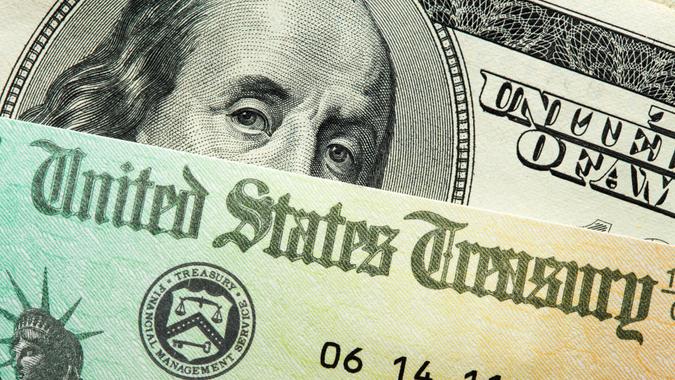 If you work for an employer and you haven’t adjusted your withholdings, chances are good that you have a tax refund coming your way soon. But how much should you plan on getting back from the government?

If You’re Getting One: How You Should Use Your 2022 Tax Refund, According To Experts
Important: How Long Will It Take To Get Your Tax Refund?

A recent GOBankingRates study of 1,000 American adults found that more than half — 56% — are expecting a windfall greater than $1,000. Is that a reasonable expectation, or are the majority of Americans setting themselves up for a disappointing end to tax season?

GOBankingRates asked the experts to add some context to the study’s findings.

$1,000 Is Actually Well Below Average — Depending on What You Make

The study’s respondents were correct to expect a four-figure refund — but $1,000 is only about half of what’s coming their way, in most cases.

“The average tax refund is increasing beyond $2,000 for most filers,” said Brad Biren, a tax and elder law attorney and founder of IQMOP.com. “In general, the more you make, the higher your refund is likely to be because there is more the government can return.”

In most cases, you’ll start to notice a change in your refund when your income falls squarely between the second and third IRS tax brackets ($9,950-$40,525).

“At the $24,999 income level, it is a challenge to get a refund over $2,000,” Biren said. “In general, that tax bracket has an almost 50% chance of above or below the $2,000 refund mark, with a more than likely outcome of over that threshold. This particular income bracket is less state-dependent once you begin moving up the income ladder.”

Refunds Spike for All but the Lowest Earners, Then Hold Steady

Once you reach $25,000 in income, you can expect a bigger refund — but generally, that refund will remain the same until you’re much deeper into the middle class.

“The likelihood of a refund being over $2,000 does jump significantly around the $24,999 bracket,” Biren said. “But then almost stays the same until one jumps into the $75,000 tax bracket. The refunds in this bracket hover around the $2,500 mark.”

Biren said that a lot of this phenomenon has a lot to do with state residency.

“For example, a person living in a state with higher income tax rates may see less of a total tax refund compared to a person in a low or no income tax state … Therefore, you could be one of those people who will get a net federal and state refund closer to $2,000.”

As a rule of thumb, according to Biren, “most people with W-2 income and especially those with 1099 income will have the opportunity to receive a refund larger than $2,000.”

In General, Refunds Are Bigger This Year

That number is sure to change again as the weeks drag on, but the trend is clear — on average, the IRS is issuing bigger refunds this year. But why?

Beware: Reasons You Might Not Get a Tax Refund This Year

If refunds are larger across the board, there are only two plausible explanations, but considering the realities of 2021, one is a whole lot more plausible than the other.

“Most taxpayers expect a refund over $1,000 because they either have a lot of itemized deductions or credits to claim,” said Arthur Rosatti of Ashley F. Morgan Law, PC, who is licensed to practice in front of the IRS. “The biggest credits being claimed are Child Tax Credits.”

It’s true that the American Rescue Plan was a boon to parents, but they’re not the only taxpayers who will be enjoying bigger checks from Uncle Sam thanks to last year’s pandemic stimulus.

Some Refunds Might Be Lower Thanks to Advance CTC Payments

One credit, however, was partially paid in advance for the first time in history — and that could cut the other way.

“Many taxpayers will see lower refunds as they received prepayments as part of their refundable Child Tax Credit,” said Jody Padar, a certified CPA and head of tax strategy and evangelism at April, a new intelligent tax platform. “The payments everyone received starting over the summer were not free money like the stimulus checks. The payments were part of tax credits that taxpayers typically received as refunds as part of their 1040 tax filing. So, some taxpayers will be surprised by their lower refund compared to last year’s amount because they received it incrementally over 2021.”

It’s important to remember that while the CTC wasn’t partially paid in advance in previous years, it also wasn’t fully refundable before the pandemic, either.