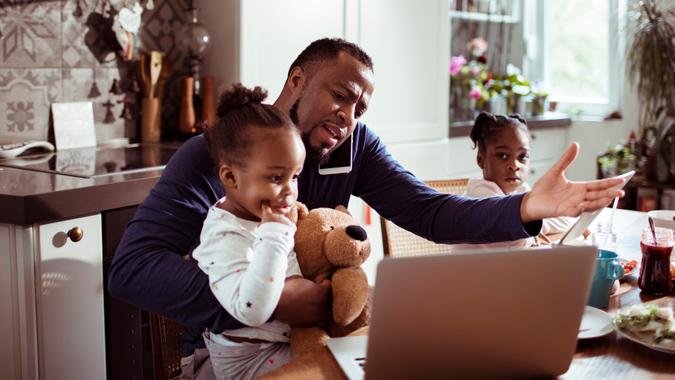 After almost 10 days, parents are finally receiving child tax credit payments they should have gotten on Sept. 15. Angry parents took to Twitter revealing that the money, which was due almost two weeks ago, has still have not been deposited in their accounts.

Families who are eligible can receive $300 per child for children under the age of 6 and $250 for children aged 6-17. Eligibility largely relies on income thresholds, $75,000 and under filing single and $150,000 filing jointly.

The IRS released a statement last week — two days after the payments should have hit accounts — saying that approximately 35 million checks had been sent out. They noted we are aware of instances where some individuals have not yet received their September payments. They added that these families may not yet be able to receive their current stats in the Child Tax Credit Update Portal and that the IRS was looking into the situation.

DajaMichelle1 wrote on Twitter this morning, “It’s the 27th still no update on the #ChildTaxCredit portal. Still no money in my account!”

The tweet comes 10 days after the IRS acknowledged the delay and claimed to be looking into it.

Another parent, DajaMichelle1, wrote “portal hasn’t been updated at all. It’s been 10 days!” on Sept. 25, also sharing a screenshot of their online account.

#ChildTaxCredit portal haven’t been update at all. It’s have been 10 days! pic.twitter.com/JsKJBowZod
— Daja Michelle (@DajaMichelle1) September 25, 2021

August’s checks also had their issues. The IRS stated last month that about 15% of families who were signed up for direct deposit received paper checks instead, but that the problem would be resolved by this month’s payment.

See: Petition for 4th Stimulus of $2,000 Monthly Payments Reaches 2.9 Million Signatures
Find: Fourth Stimulus Checks Are Coming From These States — Is Yours on the List?

On Friday, the IRS released a note stating that a technical issue caused about 2% of recipients to miss the September payment entirely. They noted that the majority of those impacted were mostly parents who had recently made an update on their bank account or address on the CTC Update Portal. Payments to married couples filing jointly, in which only one spouse made a bank or address change, were also a part of the group.