Recently, taxpayers have taken part in tea parties around the country to protest increased taxes that they believe are meant to pay off bailout debts. No one wants to be responsible for someone else’s mistakes, right? But it turns out that taxpayers may have their information a little skewed.

According to reputable tracking sources like ProPublica, much of the bailout funds haven’t even been tapped yet. For example, of the $1.5 trillion allotted to banks through the FDIC’s Temporary Liquidity Guarantee Program, only $297 billion has been used so far. But what’s really interesting is that banks are required to pay between 0.5% and 1% in interest in order to borrow. This means, they’re responsible for paying back their own debt – with interest.

So why are taxpayers thinking the worst? Probably because they feel betrayed by a failed financial and housing market that resulted in a loss of jobs, financial securities and foreclosures. Also, it doesn’t help that some companies used the bailout funds they were given on bonuses and lavish outings. In other words, it’s hard to know who to trust anymore.

How Will Bailout Debt Be Paid?

But the truth of the matter is that increased taxes aren’t exactly in direct correlation with bailout debts. So while the tea party participants have plenty of reason to be upset about paying more taxes rather than being bailed out of their own financial disasters, unfortunately, their anger may be a bit displaced.

Many banks are unwilling to tap government funds in exchange for more regulation of their business structure, including executive compensation. How do you feel about the bailout now knowing that only a small percentage of government funds allotted to propping up the banking industry have been used? Will this affect your banking choices? 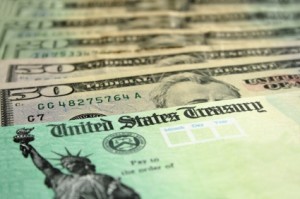 What Are Refund Anticipation Loans (and Are They Really Worth It)?