Half of the revenue the federal government collects comes from individual income taxes, according to figures from the Office of Management and Budget. That means it relies heavily on individual taxpayers to keep it up and running. However, taxpayers might not always agree with the ways the government spends their money.

To find out to what extent Americans agree or disagree with how their tax dollars are being spent, GOBankingRates surveyed 1,000 adults across the U.S. Respondents were asked whether they believe their tax dollars are being spent effectively and how they would like to see that money spent. They also were asked whether they’re paying a fair share in taxes.

Not surprisingly, the results show that there isn’t a consensus about whether tax dollars are being spent the right way. “There is some disagreement on the amount of emphasis that should be given to particular programs, but that is to be expected in a country as large and as diverse as the U.S.,” said Mark Mazur, the Robert C. Pozen director of the Urban-Brookings Tax Policy Center. But he said the bottom line is that Americans tend to realize that the government does a lot of valuable things with the taxes that are paid.

Find Out: The Wildest Things Your Taxes Are Paying For

Americans tend to feel this way if they aren’t seeing the benefits personally of government spending. “Unless they see funding toward something that directly affects them or is in line with their political views, they tend to believe the money is being wasted,” said Sebastian Leguizamon, assistant professor and director of the Center for Applied Economics at Western Kentucky University.

“The difference in age I think is probably due to growing skepticism as one gets older,” Leguizamon said. “Younger people are a bit more idealistic, believing in some of their representatives. Older folk tend to grow skeptical of the ‘same old’ politicians.”

Learn: What Do You Need To File Taxes? A List of All the Documents To Have

More Than Half Want Taxes Spent on Social Insurance

When asked if they could choose how their tax dollars were spent, 53% of respondents said spending on social insurance such as Social Security and Medicare would be of top importance. This was the most popular choice, followed by education and infrastructure. Respondents were least likely to say that the national debt should be a top priority.

“People are more likely to want their tax dollars to go to Social Security and Medicare because it’s money coming back to them,” said Tom Wheelwright, a certified public accountant and author of “Tax-Free Wealth.” Workers pay into these programs through payroll taxes on their wages. In fact, payroll taxes account for 35% of the revenue collected by the federal government, according to the Tax Policy Center.

Polls have found that an overwhelming majority of Americans believe it is their civic duty to pay taxes. However, the GOBankingRates survey found that Americans are divided over whether they’re paying their fair share.

While 46% of respondents said they think they are paying their fair share, 51% said they are paying too much. “We all want some level of public goods and services, but we do not want to pay for them — or, at least, we want to pay the least amount possible,” Leguizamon said. “When we couple this with the fact that most are unsatisfied with the way that government spends their tax money, then we start believing that we are paying too much for what we are getting.”

Need To Know: When Will You Get Your Tax Refund?

The survey found that, overall, Americans are split over whether the government spends the right amount of their tax dollars on public assistance programs. However, the divide is much more prominent between Democrat and Republican respondents.

“What this suggests is that there is only about 20% of people in the middle,” Leguizamon said. “As we see in politics, there seems to be a reduction in what we call the ‘median voter.’ A greater amount of people are identifying with one of the two major parties, which then translates into preferences for public assistance. Democrats tend to favor these programs, while Republicans think they are very inefficient.”

How the Government Spends Your Tax Dollars

The experts agree that it’s not surprising a majority of Americans aren’t happy with the way tax dollars are being spent and that about half think they’re paying more than their fair share. “There seems to be a correlation here,” Wheelwright said. “People probably feel they’re paying too much in taxes because they don’t think it’s being used effectively.”

However, it’s important to note that the survey highlights that a significant percentage of taxpayers — 27% — don’t even know where their tax dollars are going. This lack of knowledge about how their money is being used might be contributing to a sense that it’s being used ineffectively.

It’s understandable that you might not agree with all of the ways the government spends your tax dollars. But it is important to recognize that you will benefit from some of the ways your tax dollars are spent, while others might benefit from different types of government spending. “The bottom line is that Americans generally realize that government does a lot of valuable things with the taxes we all pay,” Mazur said.

Methodology: GOBankingRates surveyed 1,000 Americans age 18 and older between Jan. 20 and Jan. 21, 2020, asking six different questions: (1) Do you believe your tax dollars are being spent effectively?; (2) If you could choose how your tax dollars were spent, which of these areas would be of top importance?; (3) Do you believe you are paying too much, too little or a fair share in taxes?; (4) Which of the following are you NOT OK with your tax dollars going toward?; (5) Do you believe the government spends the right amount of your tax dollars on public assistance programs, such as low-income housing and disability payments? For context, the U.S. government spent 11.8% ($495.3 billion) on these programs in 2018; and (6) Which political party do you identify with? All respondents had to have answered “Yes” to the following screener question to participate in the survey: “Will you file personal income taxes in 2020 for 2019?” GOBankingRates used Survata’s survey platform to conduct the poll. 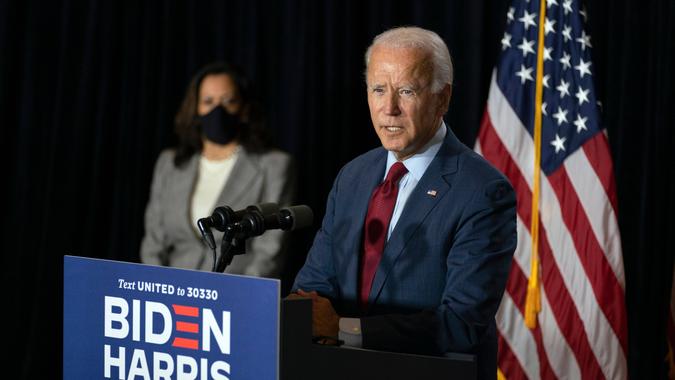 How Much Would You Really Pay in Taxes Under Biden and Trump?

Will taxes go up? Will you get a break? Find out.

> Taxes > Tax Laws > Survey: Only 18% of Americans Believe Their Tax Dollars Are Being Spent the Right Way