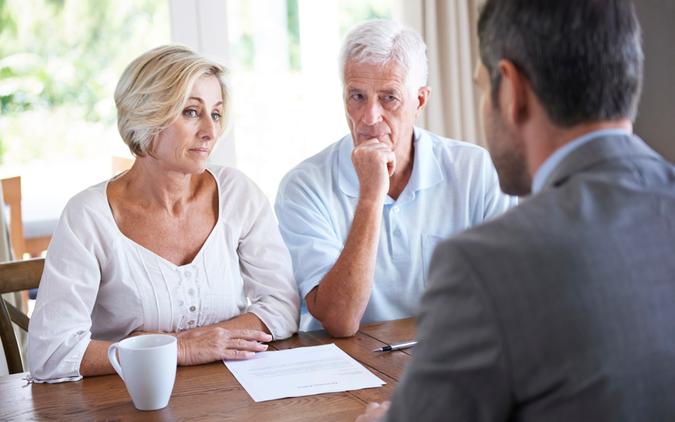 President Biden’s $1.8 trillion American Families Plan, unveiled before Congress earlier this week, includes a proposal to change taxes on inherited real estate. While the change is aimed at wealthy Americans, some experts argue it could affect middle class people as well.

See: Do You Support a Biden Tax Increase? Take Our Poll
Find: Biden Outlines Ambitions for Infrastructure, Family Benefits in Speech to Congress – Republicans Push Back

The proposal would eliminate the loophole that allows the wealthiest Americans to entirely escape tax on their wealth by passing it down to heirs, according to the plan’s fact sheet.  “Today, our tax laws allow these accumulated gains to be passed down across generations untaxed, exacerbating inequality,” the fact sheet reads.

The plan aims to close this loophole, ending the practice of “stepping-up” the basis for gains in excess of $1 million –and $2.5 million per couple when combined with existing real estate exemptions — as well as making sure the gains are taxed if the property is not donated to charity. The reform will be designed with protections so that family-owned businesses and farms will not have to pay taxes when given to heirs who continue to run the business.

“Without these changes, billions in capital income would continue to escape taxation entirely,” according to the fact sheet.

See: Tax Tricks and Loopholes Only the Rich Know
Find: $1.8 Trillion American Families Plan to Include $80B to Beef Up IRS Audits of High-Income Earners and Collect Unpaid Tax

Maryland Sen. Van Hollen, who has been pushing for such a change, said that the so-called stepped-up basis loophole is “one of the biggest tax breaks on the books, providing an unfair advantage to wealthy heirs every year,” according to a statement. “Closing this loophole will stop subsidizing large intergenerational transfers of unearned income of the very wealthy and, instead, allow us to invest this huge amount of untapped revenue to lift up all Americans.”

However, some experts say that this change could also affect more than just wealthy Americans. Under the current law, heirs are able to defer taxes on any inherited homes until they decide to sell the property and are able to use the step-up in basis, which adjusts a home’s purchase price to the value on the date of death. The Joint Committee on Taxation estimated that this loophole is worth $41.9 billion in 2021 alone.

Eden Cheng, marketing director and founder of software company WeInvoice, tells GOBankingRates that the new change that Biden wants to make will begin to treat home inheritances like sales, where heirs will be made to pay for any gains made before they inherited the property.

See: What to Do When You Inherit Real Estate That You Don’t Want
Find: American Families Plan Could Change Taxes on Capital Gains, Hedge Fund Income

“In other words, if someone was to inherit the property worth $1.5 million that was originally purchased for $300,000, the heir in question would now owe capital gains tax of up to $200,000 of the $1.2M profit. This now can become a serious concern for those heirs that would like to keep an inherited piece of property but are unable to afford the tax bill,” Cheng says.

She adds that the good news is that there are still a few ways to help reduce the bill’s impact.

“One popular method that could be used is to gift a property through the use of a personal residence trust. This will essentially take away the property’s value from an estate and allow the owner to use it for a specific number of years,” Cheng says, adding that another suggested method to help reduce the cost of taxes is to increase the property’s basis to reduce profit.

See: What Is Unrealized Gain or Loss and Is It Taxed?
Find: What the Richest 1% Pay in Taxes in Your State

“This means fitting new home improvements, by fitting a new roof or other types of renovations. However, this can be a tricky method for inherited properties that don’t have perfect records and documentation. Other methods that could be used include forming family partnerships or limited liability corporations.”

Another issue, according to Howard Dvorkin, CPA and chairman of Debt.com, is that “higher taxes on inherited homes will hurt those who might look like they’re rich, but that big house has a big mortgage. And those owners are burdened by credit cards and student loans just like everyone else.”

“I’d love to see politicians in both parties use real math to fix real problems. It’s not just about income, it’s about debt. Let’s be sophisticated about our tax system, instead of just complicated,” Dvorkin tells GOBankingRates.

See: 28 Tax Shelters, Tax Breaks and Other Tax Tips You Should Take From the Rich
Find: Elon Musk, Donald Trump and Other Super-Wealthy People Who Got Out of Paying Taxes

According to the study, middle-class family-owned businesses would be particularly hard hit by the repeal. In addition, repealing the step-up in basis would result in 80,000 fewer jobs in each of the first 10 years and 100,000 fewer jobs each year thereafter. The study also finds that the repeal would reduce GDP relative to the U.S. economy in 2021, by approximately $10 billion annually and $100 billion over 10 years.

“Repealing stepped-up basis is not a free lunch for those looking to generate tax revenue and would have significant consequences in the multifamily marketplace,” Doug Bibby, president of the National Multifamily Housing Council said in the study. “Absent stepped-up basis, heirs could inherit an apartment property with a small amount basis and possibly sizable debt. If they are taxed immediately, the resulting depreciation recapture and capital gains taxes could exceed their ability to pay without selling the asset. Even if funds to pay tax are available, heirs may have little left over to invest in and maintain the property, which could negatively impact the available affordable housing stock.”