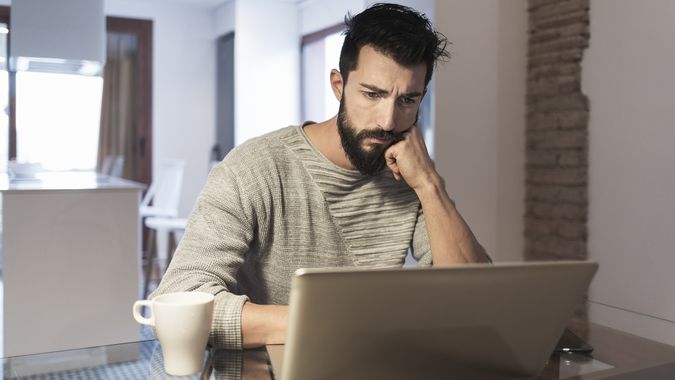 Not every fraud artist is a sketchy identity thief or faux Nigerian prince from the dark corners of the internet. In fact, you might end up committing accidental tax fraud or accidental tax evasion yourself if you don’t pay careful attention during this tax season.

Individual slip-ups usually result from negligence rather than ill intent, but either way, it will likely draw scrutiny from the IRS. The agency is serious about nipping fraud in the bud, which is why you should check and double-check your return before filing your taxes. Get the deductions and credits you’re entitled to — but make sure you do it legally.

GOBankingRates has put together this guide explaining what tax fraud is, what to do if you see it and how to avoid it by keeping your own return honest and accurate.

What Is Tax Fraud?

The IRS defines tax fraud as “intentional wrongdoing on the part of a taxpayer with the specific purpose of evading a tax known or believed to be owing.” To meet the IRS’s tax fraud definition, there must be both a tax due and owing, and fraudulent intent.

Read: What To Do When You Can’t Pay Your Tax Bill

What Is Considered Tax Evasion?

Tax evasion is a category of tax fraud. The IRS defines tax evasion as “some affirmative act to evade or defeat a tax, or payment of a tax.” Affirmative acts the IRS considers evasive include concealing assets, understating or omitting income and improperly claiming credits or exemptions.

Tax evasion is different than tax avoidance, which simply means using tax deductions and other loopholes that let you avoid paying taxes legally.

Do you wonder how you might be committing tax fraud? Keep reading to find out about seven tax fraud examples that might surprise you.

1. Filing a Return With Missing or Incorrect Information

It’s crucial to file complete and accurate tax returns to avoid committing tax fraud. For example, if you paid thousands of dollars to attend college this year, you might be eligible to claim an education tax credit to reduce your taxes. But don’t forget to include Form 8863 — for education credits — with your return. Forgetting to include the right forms or vital data such your Social Security number — or entering them incorrectly — could be the red flags that lead to an audit.

How to avoid it: Professional tax preparers or tax preparation software can help prevent inaccurate or incomplete returns. Some tax software offers built-in e-filing that won’t let you submit your forms unless all your necessary data is included.

Claiming the earned income tax credit when you’re not eligible for it is a major IRS audit trigger. The credit is designed to offset the burden of Social Security taxes for low-to-moderate earners. Taxpayers who qualify for it can get credited up to $6,660 on their returns — but you must meet specific requirements. When filing your 2020 taxes, the EITC income limits range from $15,820 to $56,842, depending on your marital status and number of qualifying children.

How to avoid it: Don’t file for the EITC if you have investment income exceeding $3,584. Child support, alimony, Social Security benefits and unemployment benefits do not contribute toward earned income. Your eligibility might fluctuate from year to year, so read the requirements closely each tax season.

Check Out: How To Pay Off Back Taxes

A tax shelter that sounds too good to be true likely is. Often, accountants and wealth planners tempt taxpayers with vague or deceptive tax shelter “opportunities,” or offer “captive” insurance structures that are at odds with your genuine financial needs, duplicate your existing coverage or provide coverage for totally implausible events. Your barbershop in Indiana probably isn’t going to get attacked by tigers, so don’t use that excuse as a tax shelter.

“These scams can end up costing taxpayers more in penalties, back taxes and interest than they saved in the first place,” former IRS Commissioner John Koskinen said in a 2017 IRS news release.

How to avoid it: If you find yourself in over your head on tax shelters, seek out an independent opinion from a tax expert. Abusive tax shelters have been highlighted for the past several years on the IRS’s annual “Dirty Dozen” list of tax scams.

Although job-related expense deductions have been eliminated for individuals, you can still deduct necessary business expenses if you are a small business owner or self-employed. Just make sure an expense is really necessary before you try to deduct it. If you think it’s clever to take the family along on a business trip just to deduct the vacation as a business expense, think again. When tax time rolls around, forget about claiming your family’s side trip to Disneyland.

Some commonly misused deductions — such as writing off groceries that you mistakenly thought were for clients or employees — are simple errors. But knowingly lying on your tax return to get more money invites trouble.

How to avoid it: Again, tax prep software helps prevent errors because it typically shows the deductions for which you qualify. Another good idea is to explore the IRS website, which offers tips for deducting business expenses and full breakdowns of what you can legally deduct. Key IRS documents such as Publications 334, 535 and 538 detail eligible business expenses and offer tax guides for small businesses.

Your chances of being audited are low. In 2018, the IRS audited 1 million tax returns, which represented less than 1% of all returns filed in the calendar year 2017, the latest year for which this information is available. That might make it tempting to claim your whole basement as a home office deduction, but don’t. Even though the chances of getting audited are low, inflated deductions are still illegal.

How to avoid it: Don’t stretch the truth. If you think you’ll have trouble paying what you owe all at once, work out a payment plan or installment agreement with the IRS via its Online Payment Agreement Tool or Form 9456.

Don’t Miss: What Can I Write Off on My Taxes?

It’s easy to not claim all your tips or cash income, especially if you don’t track it consistently. But don’t get too comfy — failing to report all of your income to the IRS might count as tax fraud and evasion, or at least failure to supply information.

How to avoid it: Tipped employees should keep a daily record of all tips received and use Publication 531 to report their tip income. Even if you’re not a tipped employee, don’t fall victim to common misconceptions about hard-to-track income. Use the most recent version of Publication 525 to keep track of what the IRS considers taxable and nontaxable income.

In the 2017 IRS news release, Koskinen said it’s important to “choose your tax return preparer carefully because you entrust them with your private financial information that needs to be protected.” Many U.S. taxpayers use tax professionals to prepare their returns. If you’re among this group, keep in mind that it’s always possible the preparers you rely on might dupe you into claiming credits or deductions you’re not entitled to in order to increase their own fees.

How to avoid it: When choosing a tax preparer, always confirm their IRS Preparer Tax Identification Number and professional credentials via the online IRS Directory of Federal Tax Return Preparers with Credentials and Select Qualifications.

What Happens If You Commit Tax Fraud?

An individual who commits tax fraud can be fined up to $100,000 and sentenced to up to three years in prison. You might also be assessed a penalty of 75% of the amount you failed to pay due to fraud. The penalty for tax evasion is even steeper — up to $100,000 in fines and/or up to five years in prison. Willfully failing to file a return, pay taxes or keep or produce records can result in a fine of up to $25,000 and/or one year in jail.

Read: These Are the Receipts To Keep for Doing Your Taxes

You can report suspected tax fraud using Form 3949-A, Information Referral. The form asks for information about the suspected fraudster and the violation you suspect they committed. You’ll also have to enter your own contact information, but the IRS won’t share it with the person or company you’re reporting. Mail the completed form to the address indicated:

To report a tax return preparer for fraud or abusive practices, use Form 14157, Return Preparer Complaint.

What Is the Penalty for an Incorrect Tax Return?

The penalty for an honest mistake on your tax return is far less painful than the penalties for fraud and evasion. In the case of an error due to negligence, the IRS can charge you 20% of the amount you underpaid.

If you forget to include information or simply make a mistake on your tax return, it will typically take longer to process the return. It will also extend how long it takes to get your tax refund if you’re entitled to one. But keep in mind that omissions sometimes prompt the IRS to take a closer look at your forms and perhaps target you for tax fraud. Honesty and accuracy will keep you out of trouble with the IRS and ensure that you don’t pay out a cent more than you owe in tax.