What To Do If Mortgage Rates Upend Your Homebuying Plans 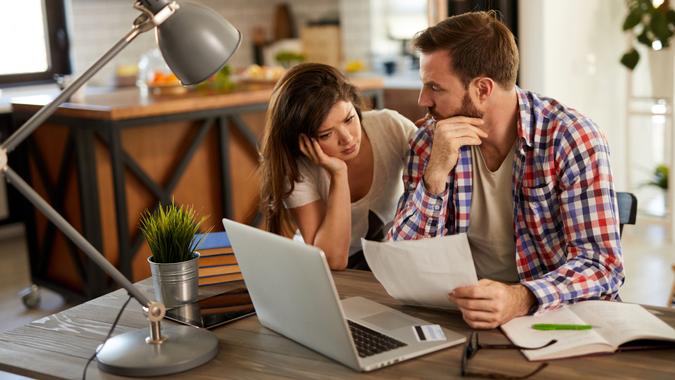 For the better part of a year, it has been public knowledge that the Federal Reserve would hike interest rates throughout 2022 to counter rising inflation. The predictable results are here — it costs more to borrow money and homebuyers are scaling back or dropping out.

Find Out: In Less Than a Decade, You Won’t Be Able To Afford a Home in These Cities
Check Out: The Best Cities To Retire on $2,000 a Month

According to CNET, the average rate for a 30-year fixed mortgage is now 5.45%, an increase of 21 basis points over last week — about where they were in 2018.

Even so, buyers shouldn’t let themselves be psyched out when it might be a good time to buy.

“Even if rising mortgage rates are making you think twice about buying a house, think again,” said Vincent Chan, chief operating officer for Christina, a Los Angeles-based real estate development and investment firm. “It’s still a great time to get on the path to homeownership, so keep trying.”

Here are the steps you can take to make “keep trying” a realistic possibility.

Gain Some Perspective and Exhale

If you’re a homebuyer who dawdled when interest rates were at their lowest, it’s OK to kick yourself — but then be grateful, considering the bigger picture.

Now that you see it’s not that bad, here’s what to do before it gets worse.

If your finances aren’t in tip-top shape, don’t contact the bank until you scour your credit report for ways to improve.

“Prospective buyers should combat rising mortgage rates by finding ways to strengthen their mortgage application,” said Jason Ault, real estate consultant at Element Home Buyers. “A lender would offer you a rate based on income, total debts and credit score. You can improve your chances of qualifying for a lower rate by paying off higher-interest debts. This would help boost your credit score and improve your rate by a few basis points, establishing you as a qualified candidate.”

Base Your Scouting Strategy on DOM

Precondo is a Canadian real estate company, but the advice of its founder Jordon Scrinko is universal because the days-on-market (DOM) rule knows no borders.

“Shopping for a home that has been on the market for longer can lower the price, and thus the mortgage amount, significantly,” he said.

The DOM clock starts ticking the moment a seller lists a property, and if no one snatches it up quickly, the seller has to lower the price to stay competitive with neighborhood comps and avoid the perception that something is wrong with the property — but where is the DOM sweet spot that buyers should concentrate their efforts?

According to Homelight, sellers generally start cutting prices after a home has been on the market for around two weeks. However, in a hot seller’s market like today’s, DOM anxiety has forced many sellers to accept that they’re overpriced after just a few days and lower the price after just one week with no bites.

According to CNBC, you could shave an entire percentage point off your rate by ditching the fixed loan in favor of an adjustable-rate mortgage (ARM).

“Instead of the traditional 30-year mortgage, it might make more sense to take out an adjustable mortgage with fixed rates for a five, seven, or 10-year period,” said Isaiah Henry, CEO of the property management company Seabreeze. “This is especially true if you plan to sell before 30 years.”

Marina Vaamonde, owner and founder of HouseCashin, also believes that ARMs are worth considering, but she’s emphatic that they’re not for people who plan to stay put.

“Many experts agree that one of the reasons for the crash in 2008 was that too many people had ARMs for their homes and could only afford payments for the low rate in the initial period,” Vaamonde said. “ARMs are great for homeowners who plan to stay in their homes for no longer than five years.”

Baron Christopher Hanson of Coldwell Banker Realty thinks that in light of rising interest rates, expensive gas and high inflation, today’s buyers would be wise to purchase under budget and invest the difference in sweat equity.

“Prospective buyers must supplement their home-buying plans to include dramatic renovation and property value-adding plans,” he said. “For example, here in South Florida, from Miami to Vero Beach, we have many hundreds of thousands of single-story concrete-block-with-stucco, single-family homes built in the 1960s, ’70s, and ’80s as seasonal vacation homes.”

Many were built without air conditioning and deliberately small windows to limit solar heat.

“The problem is that these older homes are drab, dated, and cramped inside, with no modern interior or exterior features that wow the way new construction is post-COVID,” Hanson said.

That makes them affordable even though they’re “situated on sunny Florida lots not too far from the beach or intracoastal waterways,” according to Hanson.

By finding your region’s version of these overlooked, undervalued fixer-uppers, you’ll put less money down and borrow less from the bank, which leaves money for upgrades that can negate the cost of today’s higher interest rates.

“High-value architectural renovation is the best way homeowners can counter the awful fiscal conditions we are facing,” said Hanson. “This means buying properties that can be refreshed, architecturally improved, and otherwise transformed into a home’s highest and best use toward new profits or ROI. In my view, there is more opportunity in transforming obsolescence into awesome than ever.”