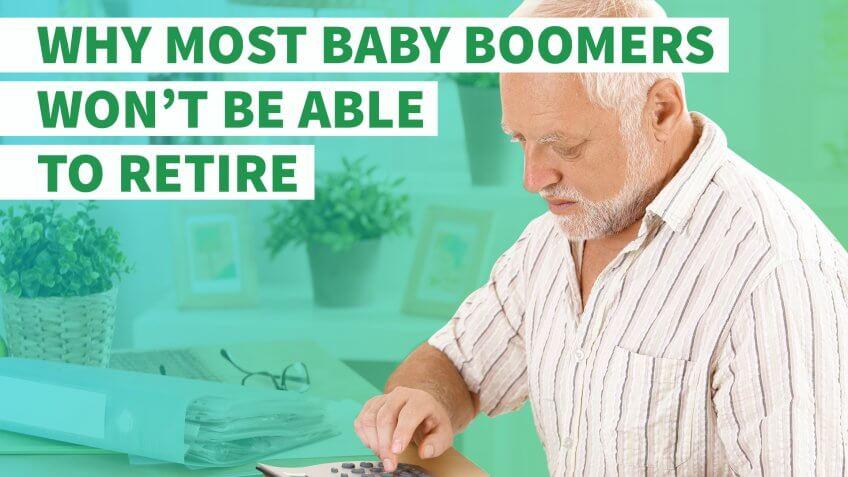 Many baby boomers won't be able to retire — at least, not in the traditional sense. The idea of days on the golf course, adventures around the world and leaving the workforce by age 65 won't be a reality for many people in this age group, based on the findings of several recent studies.

Here's a look at the several reasons boomers will face headwinds if they want to leave their 9-to-5 job. If any of these reasons sound familiar, take steps today so you can catch up on your retirement savings. 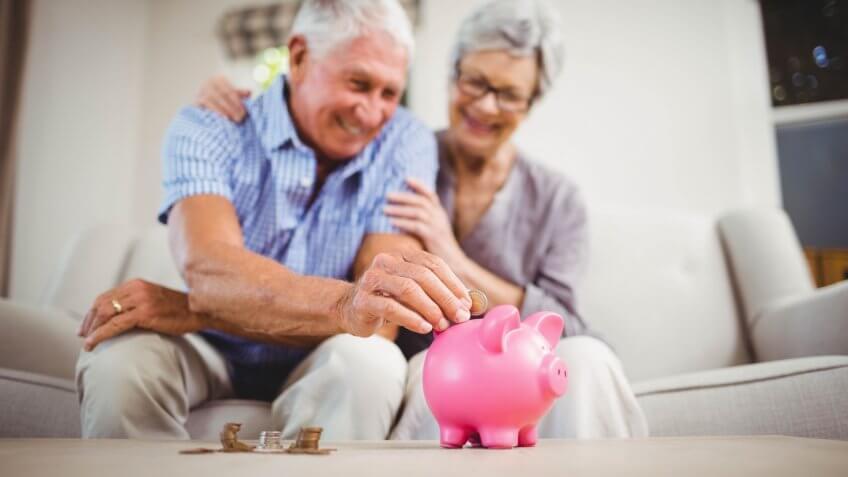 A big reason boomers might have trouble retiring is because a growing percentage of them have absolutely nothing saved for retirement. In fact, GOBankingRates' 2017 Retirement Savings survey found that 29 percent of adults ages 55 and older have $0 saved in 2017, up from 28 percent in 2016.

Findings by Insurance Retirement Institute are even bleaker. According to its Boomers Expectations for Retirement 2016 survey, 45 percent of boomers don't have money saved for retirement — up from 42 percent in 2015 and 20 percent in 2014.

Many of the boomers who are saving aren't saving enough. Less than half of adults 55 and older have more than $50,000 saved, found the GOBankingRates survey. Those with less than $50,000 in savings would hardly have enough to cover one year of expenses in retirement, considering that the average annual spending of adults who are retirement age is about $47,000, according to the Bureau of Labor Statistics.

"The boomer group has never been exceptional at saving," said Scott Goldberg, president of Bankers Life. "Any study will tell you they've not saved as much as experts suggest they need to retire."

But even the boomers who have been saving likely still won't be able to retire on time. Another GOBankingRates survey found the No. 1 reason adults 55 and older don't currently have retirement savings: It's because they had to use the money for an emergency.

Find Out: How to Bounce Back After Draining Your Retirement Funds 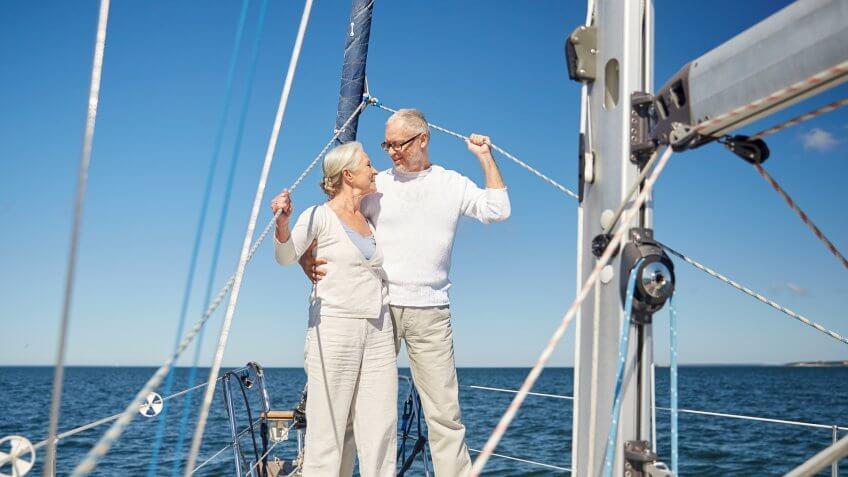 Despite a lack of savings, 60 percent of boomers believe they will have enough income to cover expenses in retirement and have money left over for leisure activities and travel, found the IRI survey.

These findings show there's a disconnect between what boomers expect and how well-prepared they actually are, said Frank O'Connor, vice president of research and outreach for the Insured Retirement Institute. It's because many haven't even bothered to figure out their retirement savings needs.

Only four in 10 boomers have tried to calculate how much they need to have saved for retirement, according to IRI. "Call it a head-in-the-sand mentality — a failure to see what retirement is going to look like," said O'Connor. "They're not planning."

If you're nearing retirement age, you should know how much money you need to retire. There are plenty of free online calculators offered by retirement plan providers such as Fidelity and Vanguard. 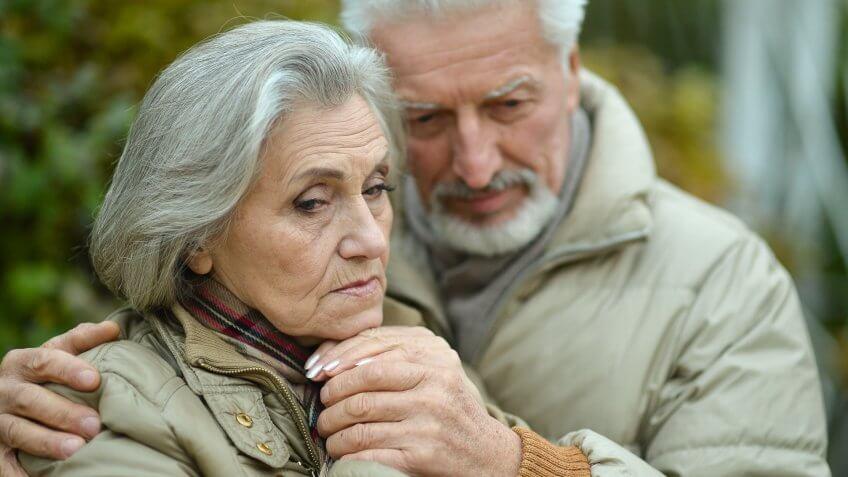 Boomers Are Still Recovering From the Great Recession

The Great Recession has played a role in boomers' lack of savings and unpreparedness for retirement. "This group has still not fully recovered since the peak before the crisis pre-2007," said Goldberg.

Two-thirds of middle-income boomers don't feel like they've personally benefited from an economic recovery since the recession, according to a recent survey by Bankers Life Center for Secure Retirement. More than half (52 percent) of those boomers said their savings are lower now than before the financial crisis began.

Unfortunately, only 17 percent of those surveyed by the Center for Secure Retirement are now saving a larger percentage of their paycheck. In fact, 21 percent are actually saving a smaller percentage, and 24 percent say they no longer save — which won't help their retirement savings balances rebound. Part of their reluctance to save and invest could be driven by fear of another crisis.

"People who've been burned are not going to jump back in the markets head first," said Goldberg. If that sounds like you, it's time to get over your fear of investing so you can grow your savings for a comfortable retirement. 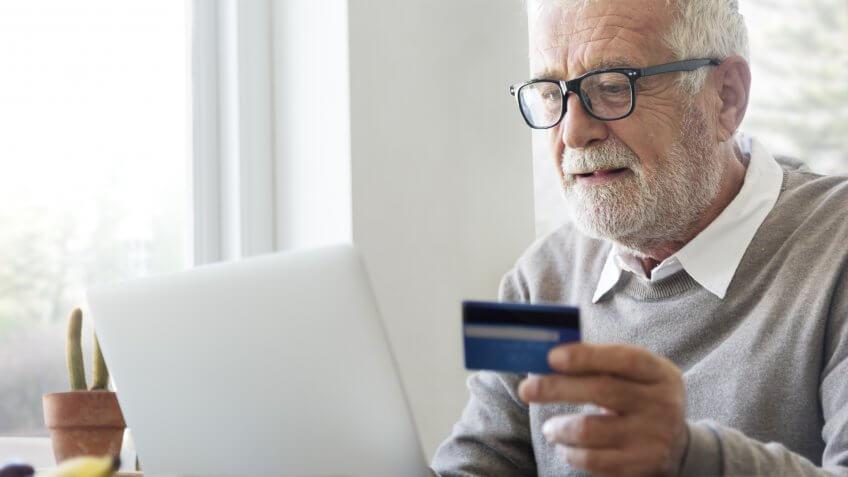 Boomers Have Taken on More Debt

Boomers' debt could make it harder for them to have a comfortable retirement or to retire when they want. "Boomers have the second-highest level of debt across generations, averaging $99,852 — surpassed only by Generation X, whose average debt is $134,786," said Heather Battison, vice president of consumer communications at credit bureau TransUnion.

Many boomers don't expect to be able to pay off debt before retirement. Before the recession, 45 percent of middle-income boomers expected to retire debt-free, according to the Center for a Secure Retirement. Now, only 34 percent expect a debt-free retirement.

Those who do retire with debt will be left with less money to cover necessary expenses after making debt payments each month. Having a high amount of debt could even make it difficult to pay your bills, said Battison. And, it could hurt your credit score.

However, a TransUnion survey found that maintaining good credit health isn't a top financial priority for most boomers when preparing for retirement. And 20 percent of adults ages 51 to 70 have subprime credit.

"Subprime credit is a red flag for lenders, plain and simple," said Battison. "Retirees with subprime credit may not be approved for any subsequent lines of credit they try to open." So if boomers with poor credit are strapped for cash because of poor retirement planning, they might not be able to get a loan or line of credit they need to help cover costs.

"Subprime credit can also lead to unfavorable lending terms," Battison said. "So even if a retiree gets approval, they may have high interest rates on their loan balance." That could stretch an already small retirement income very thin and force some to return to work.

See: 5 Debts You Need to Tackle Before You Retire 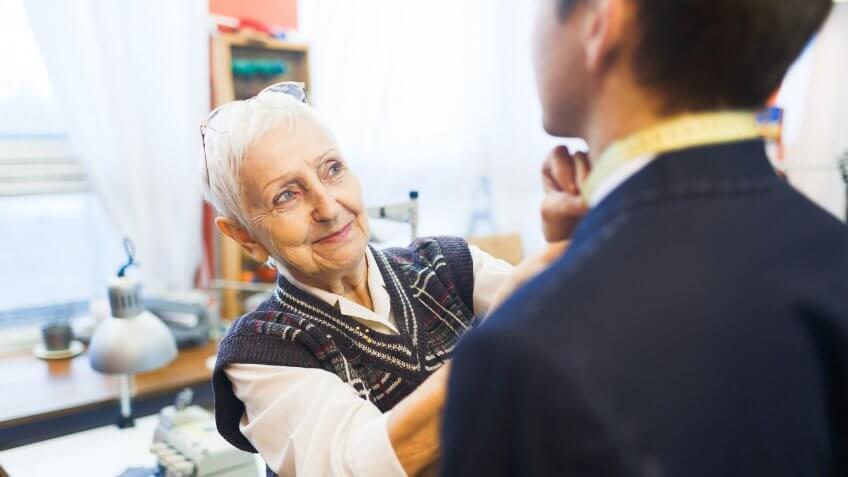 Boomers Will Have to Work Longer — or Work in Retirement

Not only are boomers planning to retire later, but many plan to keep working in retirement. Before the 2007 financial crisis, a minority of boomers said they would work in retirement, said Goldberg. Now, half (48 percent) expect to work full or part time.

"It's even becoming an expectation that retirees will have to work in retirement," he said. For some, it might be a choice. But for many, it likely will be financially necessary.

"The industry mantra has always been save, save, save," said Goldberg. "That's great advice for people who are young or maybe middle of their career. When you get toward the end of your career, saving more may not be an option."

The longer boomers work, the longer they can go without tapping their savings — giving their accounts more time to grow. "Those couple of extra years of staying in the workforce can have such a profound difference," Goldberg said. Plus, they'll be able to delay claiming Social Security, which will give them a higher monthly benefit when they do retire.

Find Out: How Your Retirement Age Impacts Your Social Security Benefits 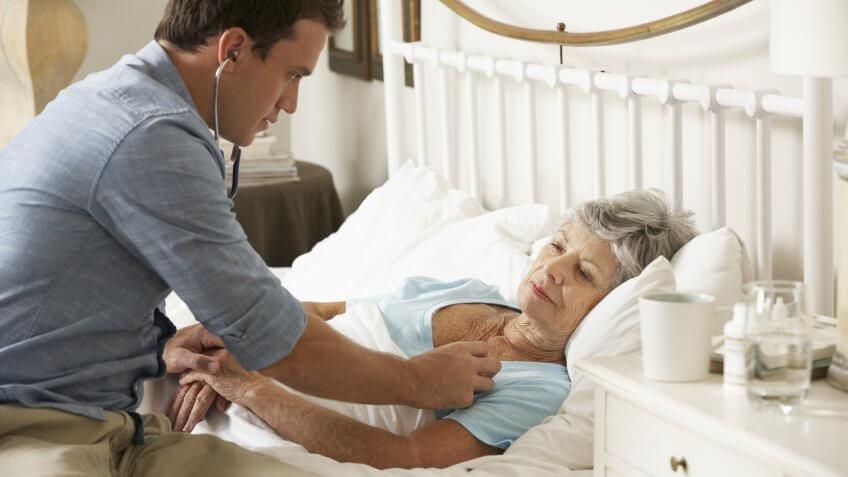 "The wild card in retirement is your health," said Goldberg. And it's a card many boomers aren't prepared to be dealt.

Those who haven't saved much for retirement might be surprised to find that they're even further behind than they thought — especially if they factor in how much they'll need for medical costs. A 65-year-old couple retiring in 2016 was expected to need $260,000 to cover healthcare costs, according to Fidelity's Health Care Cost Estimate. That's the highest amount since Fidelity started doing the calculations in 2002. Boomers could expect to face even higher healthcare costs by the time they retire.

One way boomers can manage healthcare costs in retirement is to set aside money in a health savings account while they're still working. With an HSA, you can make tax-deductible contributions, and funds can be withdrawn tax-free for qualified medical costs.

Health is also a wild card for boomers who are counting on working longer because of inadequate savings. They might find themselves in a financial bind if a health condition leaves them unable to work.

And it might not even be their own medical issue that wrecks their plans. Boomers might have to work fewer hours or stop working altogether to care for a family member. As a result, they'll likely have to downgrade their lifestyle and cling to Social Security income, said Goldberg. 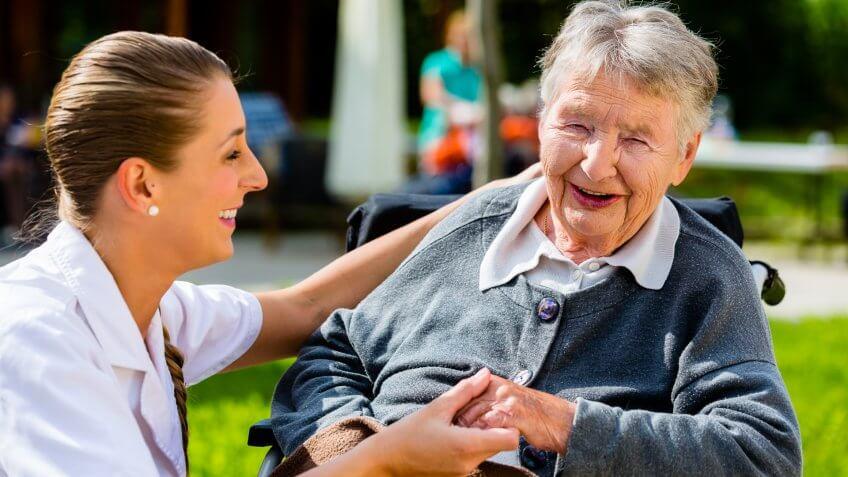 Almost 70 percent of people turning 65 will need long-term care at some point in their lives, according to the U.S. Department of Health and Human Services. One in five will need it for longer than five years. However, less than one-third of Americans 50 and older have begun saving for long-term care.

The average monthly cost of an assisted living community is $3,628, according to Genworth's 2016 Cost of Care Survey. That's $43,536 a year. The average cost of a private nursing home room is more than twice as much — $7,698 a month or $92,376 a year. Since Medicare does not cover long-term care, boomers' savings could quickly be wiped out to pay for this sort of care, said Goldberg.

Long-term care insurance can help soften the blow. Policy premiums vary by coverage and age of the insured. However, someone in their mid-60s could get comprehensive coverage for about $200 per month, on average, said Goldberg. A policy that provides coverage for just 365 days would cost even less. "The best thing someone can do is take action when they are healthy enough to qualify for a plan," he said.

And the sooner boomers take action to boost savings, reduce spending and get their finances in order, the greater the chances of being able to retire on their terms.

"The sooner you can make those changes, the more runway you give yourself in the years ahead," said Goldberg.

Up Next: The Real Reason Most Americans Don't Have Retirement Savings 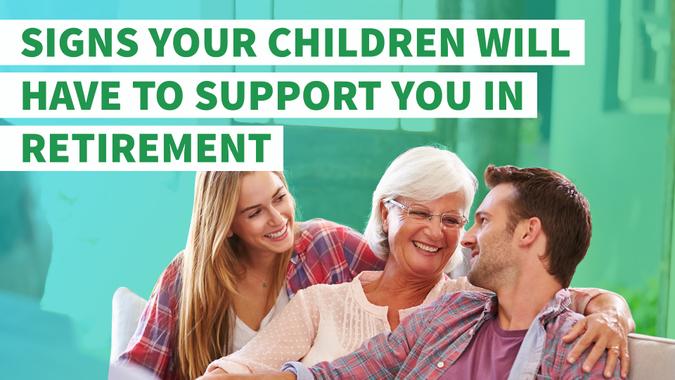 > Retirement > Planning > Why Most Boomers Won't Be Able to Retire