Today, most employer retirement plans come in the form of 401ks, as companies with pensions are becoming harder and harder to come by. Employees at businesses that don’t offer 401ks will have to open an IRA or Roth IRA on their own.

When comparing different types of retirement plans, keep in mind that the amount your employer matches will have a big impact on your life after your earning years have passed. Because of compound interest, a variation of just a few percentage points could mean the difference of hundreds of thousands of dollars over the course of a career.

Modern tech giants like Google are lauded for their employee-centric work cultures, creative incentives and all-around awesome benefits that include perks like cooking classes, guitar lessons and great parental leave policies. Many also shine when it comes to offering generous investment accounts for retirement planning.

Here’s how the retirement offerings from tech companies stack up:

Google’s plan allows employees to be fully vested from their first day with a 401k match of 100 percent up to $3000. They also have automatic enrollment for their employees.

Apple has one of the best 401k match benefits. It offers 50 percent of the first 6 percent for the first two years of service. Employees are fully vested in the plan from day one.

Oracle offers a company match of 50 percent of the first 6 percent that the employee contributes to the plan. The vesting is 25 percent each year for four years until the employee is fully vested.

Facebook’s 401k plan is comparable to other retirement plans in the tech industry. The company offers a 50 percent match on the first 7 percent contributions to the plan. The employee becomes fully vested in the plan after four years.

Amazon offers a company match of 50 percent of up to 4 percent of the employee’s contributions. The employee will be fully vested in the plan after three years of service.

Some of the best 401k plans are included in the retirement packages offered by the biggest companies in the world. This year’s list of nontechnical giants features some familiar names as well as some new companies. Among the companies that didn’t make the cut this year — after appearing in last year’s top 10 — are Halliburton, Monsanto, DuPont, Aetna and Time Warner.

ConocoPhillips’ employees can receive a 6 percent contribution if you contribute 1 percent of your salary. Additionally, Conoco offers contributions of 6 percent, 7 percent and 9 percent based on years of service and age. Employees are fully vested after three years and 1,000 hours of service each year.

Boeing offers a 50 percent match on contributions of up to the first 6 percent of contributions from the employee. Each employee becomes fully vested in the plan after five years of service with Boeing.

McDonald’s offers a 401k match for employees that are over twenty-one and have been working for at least a year. The match is $3 for each $1 contributed for the first 1 percent, and then a 100 percent match on the first 4 percent of contributions. Employees are vested from the first day of contributions.

Mastercard allows employees to begin contributing to retirement. The automatic enrollment is 6 percent and Mastercard offers a 125 percent matching on the first six percent of contributions. An additional 1.25 percent may be contributed based on company performance.

Philip Morris International offers a company match after 90 days of service. The match is 100 percent of the first 5 percent of contributions made by the employee. New employees are automatically enrolled in the plan with a 3 percent contribution.

Altria offers a profit-sharing plan that will match your contributions of up to 3 percent dollar for dollar or 100 percent. Additional contributions of 13 to 17 percent are available for salaried employees after one year of service.

Visa offers a generous match for eligible employees with a 200 percent match on the first 3 percent of contributions. The plan also allows you to direct your contributions through a number of different investment accounts.

According to Bloomberg, 3M offers a 100 percent match on the first 6 percent of salary contributions by the employee. 3M also offers matching contributions for Retiree Medical Savings Account.

The best retirement plans aren’t always hosted by the most well-known companies. Here are some of the best plans from businesses that might not be household names.

Navy Federal offers both a non-contributory retirement plan, or pension plan, and a 401k savings plan with matching contributions. The company contributes a 100 percent match on the first 7 percent of contributions to the Cash Balance Plan.

JM Family Enterprises will begin contributing 3 percent to your retirement after completing six months of service. Employees are immediately vested in this contribution. A profit-sharing plan is also offered after a year of employment. The employee will be fully vested in that plan after six years.

Gilead matches employee contributions at 100 percent for the first $10,000 each year. Employees are immediately invested in their 401k plan. There is also an optional stock purchase program.

Check If Your Company Stacks Up

Companies with pension plans used to be the key to aging comfortably. But with the arrival of the 401k in 1978, workers took more control over their retirement savings — and the best candidates began expecting more from their employers. Today, millions of Americans depend on their 401ks for security and independence in life after their earning years, and companies that lure the top talent are often the companies with the best retirement plans. 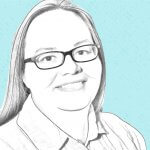 Miriam Caldwell is a North Carolina-based writer specializing in personal finances.  Miriam has written about everything from budgeting to managing your money while married. With more than 12 years of experience, her writing as appeared online at TheBalance.com, About.com, and BlissfullyDomestic.com. The Dangers of ‘Set It and Forget It’ Retirement Plans