Tracking Mortgage Rates From the 1970s to Now 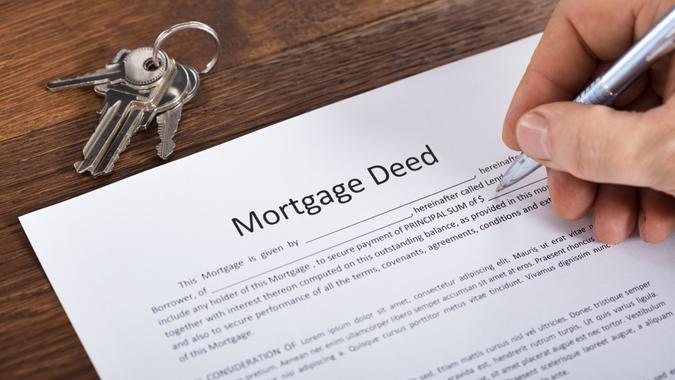 The current rate for a 30-year fixed mortgage is 4.67%, according to the St. Louis Fed. That might feel high compared to last year’s rock-bottom pandemic lows, which bottomed out at 2.67% — but historically speaking, it’s not even close.

With mortgage rates rising toward 5% as inflation hits a 40-year high, GOBankingRates took a walk down mortgage memory lane to learn about the economic history that led borrowers to where they are today.

More To Know: 15 Worst States To Live on Just a Social Security Check
Discover: In Less Than a Decade, You Won’t Be Able To Afford a Home in These Cities

A Half-Century Ago, America Endured an Economic Earthquake

Anyone who has reached late middle age or beyond will remember the anxious and uncertain economic times of the 1970s. At the start of the decade in 1971, the United States abandoned the gold standard, ending the era of money that could be converted to metal, which had existed since the Bretton Woods Conference of 1944 created a new monetary world order after World War II.

Two years later, in 1973, the Organization of the Petroleum Exporting Countries (OPEC) ended the era of cheap energy when it reacted to America’s support of Isreal with a punishing oil embargo. The import-dependent United States began rationing gas in December; and, by the end of the year, long lines and “no gas” signs were common sights at filling stations from coast to coast.

Oil prices jumped by 350%, according to the National Museum of American History, and the ripple effects of the energy crisis spread to every corner of the economy. Mass layoffs and rising prices caused a head-on collision between soaring inflation and economic stagnation. The result was stagflation — one of the ugliest words in the economic dictionary.

The decade ended as it began — with a devastating energy crisis that smothered the economy, this time sparked by the Iranian Revolution. According to the Federal Reserve, oil prices doubled between 1979 and 1980.

For anyone looking to borrow money to buy a home during those terrifying and turbulent times … oh boy.

It was only the beginning. The era that would come to be known as the Great Inflation was now in full force, and it wouldn’t end until the 1980s. Then, as now, higher interest rates were a primary antidote to rising inflation; as prices soared, so did the cost of mortgage loans.

Although rates stayed at or just below 9% through the middle of the decade, they breached double digits again in the fall of 1978 and remained there until 1986.

In March of this year, the world learned that inflation had risen by 7.9% the month before, which was a 40-year high — prices hadn’t jumped so sharply since 1982.

While today’s inflation is certainly causing anxiety, it is simply not comparable to the extraordinary events of 40 years ago.

The 1980s started with a recession, which was triggered by the tight monetary policy that the Fed launched to fight a seemingly endless run of inflation, according to the Fed’s own chronicling of the events.

The decade began with mortgage rates just under 13%. Unemployment was at 11% and America was in the worst economic downturn since the Great Depression — in the ensuing decades, only 2008 has been worse.

On April 4, 1986, mortgage rates briefly returned to single digits; then, in 1987, the stock market crashed and interest rates rose yet again. Mortgage rates never fell below 9% during the entire 1980s, and the 1990s began with rates around 10%.

As America transitioned to the digital age, the country enjoyed long years of peace and prosperity in the 1990s, particularly in the second half of the decade — and homebuyers finally got a break.

21st Century: A Time of Crisis — and Cheap Money

The 21st century witnessed three major economic calamities: the bursting of the dotcom bubble and ensuing recession at the start of the 2000s, the Great Recession at the end of the decade and, of course, the coronavirus pandemic.

The 2000s started with mortgage rates up above 8; but, when the 2001 recession hit, rates were lowered to spur economic growth. By fall of that year, rates were at 6.5%, where they remained — despite some peaks and valleys — in 2008. When the housing crash sunk the global economy, rates plummeted again, this time below 5%, where — with the exception of two brief flare-ups — they have remained until today.

In response to the pandemic, rates fell to historic lows below 3%. Borrowers became so spoiled with such cheap money that today’s rate of 4.67% seems high — but anyone who’s up on their history knows better.