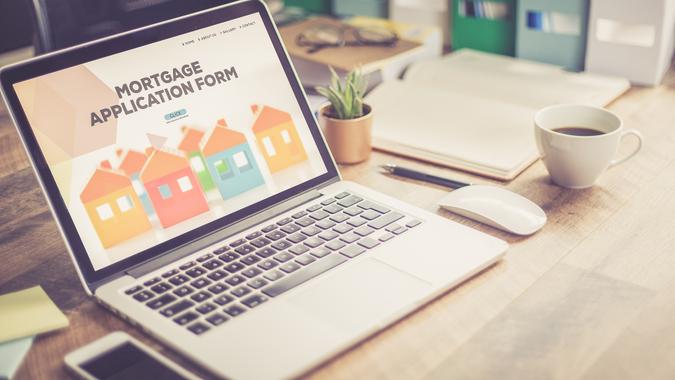 See: 5 Best Foods To Buy in Bulk at Costco This Spring
Find: What Income Level Is Considered Middle Class in Your State?

“Mortgage rates jumped to their highest level in more than three years last week, as investors continue to price in the impact of a more restrictive monetary policy from the Federal Reserve,” Mike Fratantoni, MBA Senior Vice President and Chief Economist said in a press release. “Not surprisingly, refinance application volume declined further, as fewer borrowers have an incentive to apply at rates that are significantly higher than a year ago.”

“Refinance application volume is now 60 percent below last year’s levels, in line with MBA’s forecast for 2022. Even with the ongoing climb in rates, purchase application volumes were little changed last week,” Fratantoni said in the release. “This is particularly auspicious, as we are now in the beginning of the spring homebuying season, and those shopping for homes are struggling with not only higher and more volatile mortgage rates but also an ongoing shortage of homes on the market. Given these hurdles, it appears to be promising news that purchase application volume has not declined, as many potential buyers are likely feeling the squeeze in their purchasing power from the jump in rates.”