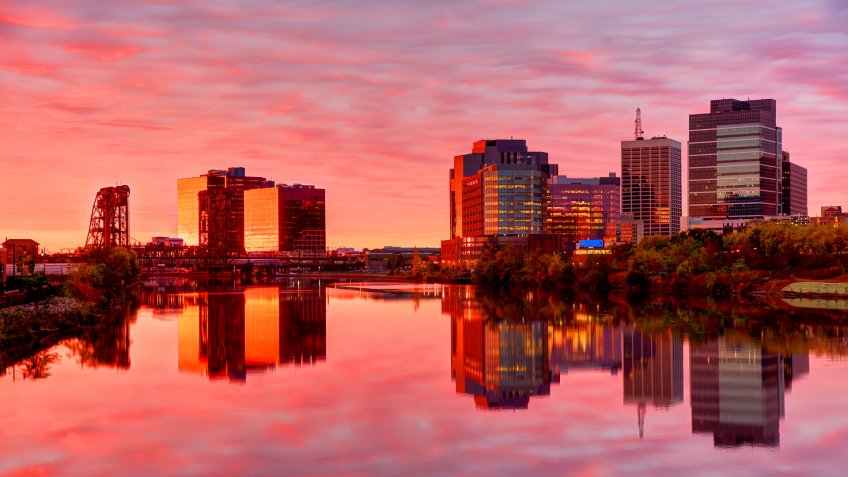 It’s said that the rich get richer and the poor get poorer, and this could be true of cities as well as people. GOBankingRates looked at 82 major cities in the U.S. to determine how economic conditions have changed from 1970 to 2017. The study examined:

These factors were then scored to find 20 cities in the U.S. that are getting poorer.

In all 20 cities, the median household income has gone down since 1970. Per capita income declined in half of the cities and rose in the other half.

A shrinking population is often associated with poverty as more affluent residents leave declining cities and move to the suburbs or other cities with more growth. Sixteen of the 20 cities on GOBankingRates’ list have decreased in population since 1970.

Most of the cities on this list are located in the middle of the country — in the aptly named Rust Belt — where incomes have suffered due to the automation and export of manufacturing jobs, which this region depended heavily on throughout the last century. 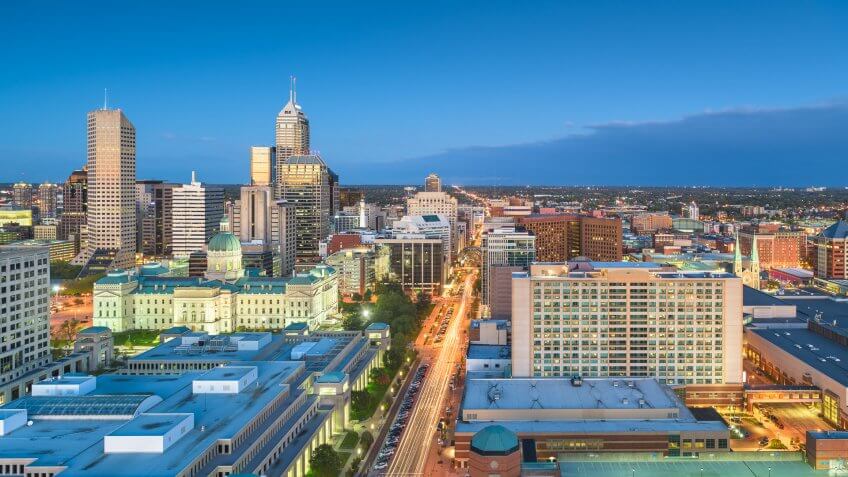 According to the University of Minnesota Law School’s study on neighborhood economic expansion and decline in the U.S., 57% of all Indianapolis residents — and 72% of low-income residents — live in neighborhoods that are strongly declining. The poverty rate in Indianapolis grew from 8.8% in 1970 to 20.1% in 2017, the third-smallest increase on GOBankingRates’ list. Indianapolis had the largest population increase out of the 20 cities that are getting poorer. 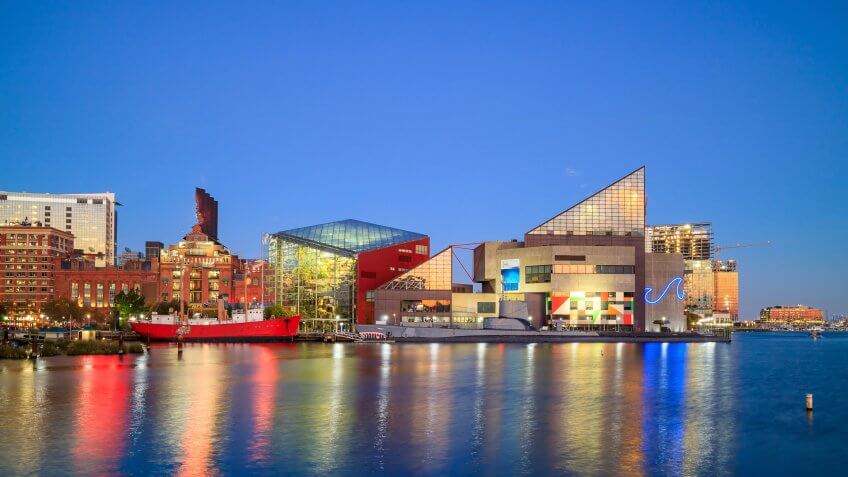 Baltimore has a history of racial tensions, which could be related to the growing poverty in the city. While parts of Baltimore are experiencing gentrification, there are still large pockets of low-income areas that continue to decline. Overall, Baltimore had the smallest decrease in household income and the second-largest increase in per capita income of any city on this list. Its poverty rate also saw the second-smallest increase, going from 11.3% to 22.4% from 1970 to 2017 — an overall increase of 11.1%. 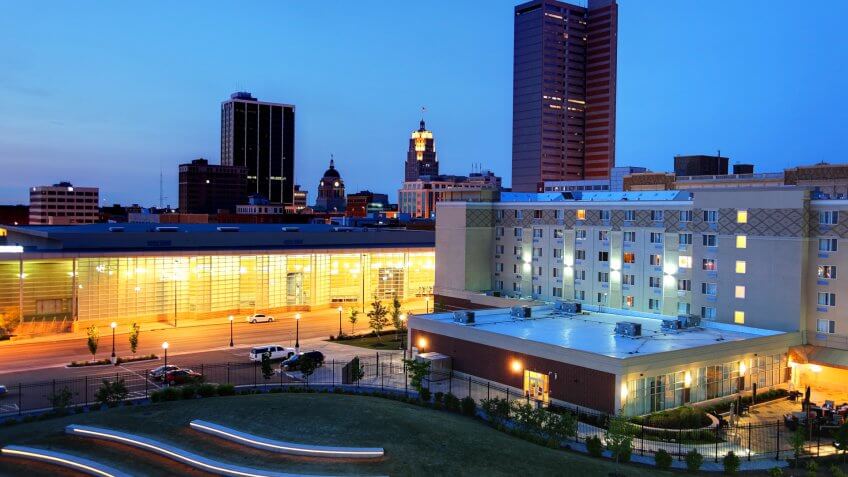 Fort Wayne made a name for itself as an industrial city after World War II but suffered as manufacturing declined in the latter half of the 20th century. Fort Wayne had the smallest increase in poverty of any city on this list, as well as the lowest poverty rate in 2017 at 17.8%. It also had the third-largest increase in population between 1970 and 2017. 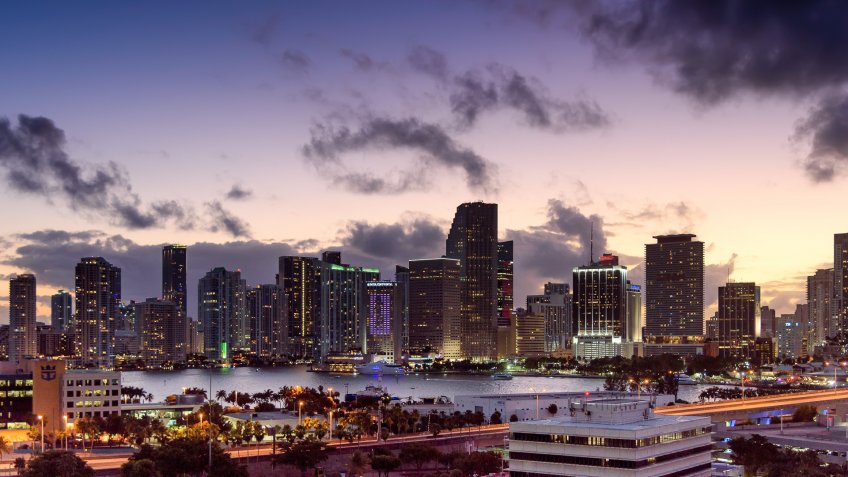 In Miami, the basic cost of living is increasing and low-wage jobs are prevalent, according to United Way’s study on financial hardship in Florida. In addition to a sizable population of affluent people, Miami has a large population of workers who are limited in assets and constrained in income — aka the “working poor.” What Miami lacks is a middle class, as workers who are able to move up the ladder tend to move out of the city. While Miami had the fourth-smallest decline in median household income of any city on GOBankingRates’ list, as well as the second-largest increase in population, its poverty rate grew from 14.2% in 1970 to 25.8% in 2017. 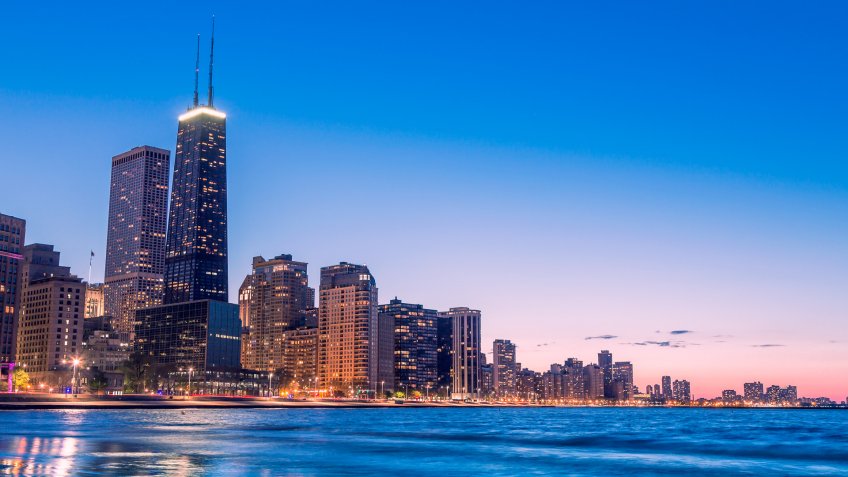 Chicago had the largest increase in per capita income and the third-smallest decrease in household income of any city on this list. However, Chicago also lost the second-highest number of residents between 1970 and 2017, which has contributed to its increase in poverty. The poverty rate in the Windy City has doubled since 1970, going from 9.3% in that year to 20.6% in 2017. However, despite the seemingly sharp increase, it’s only the third-smallest uptick on GOBankingRates’ list. 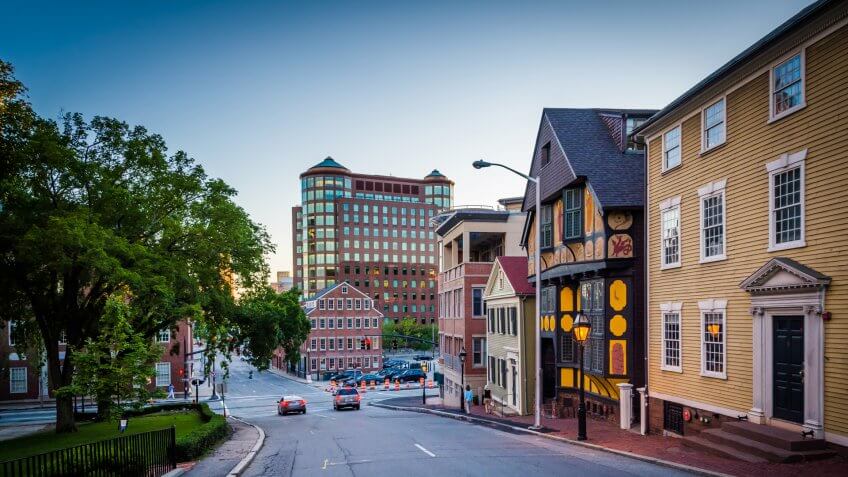 Poverty in Providence has increased by 2 1/2 times since 1970, from 10.2% in that year to 26.9% in 2017. However, Providence’s population remained nearly unchanged during that time span, with a net gain of under 400 residents. It also had the second-smallest decrease in household income of any city on this list. 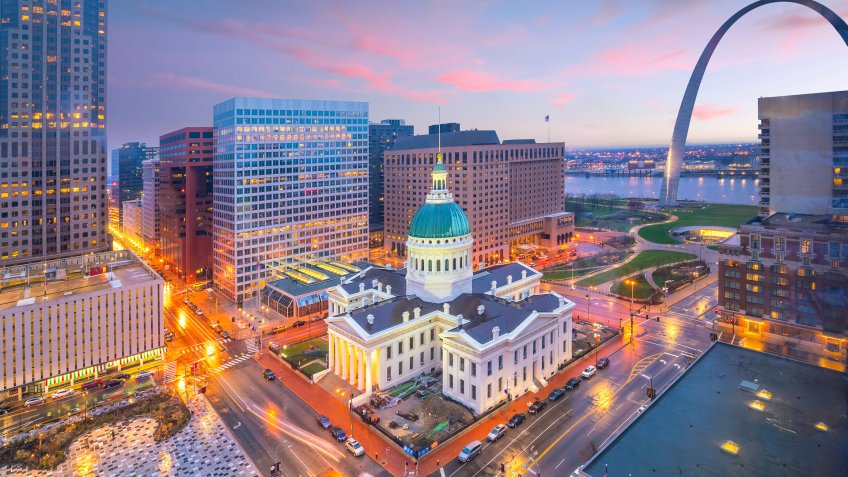 St. Louis saw the fourth-highest increase in per capita income from 1970 to 2017, but it also lost 307,369 residents — the fifth-largest population drop on GOBankingRates’ list. The city’s declining neighborhoods also outpace those that are expanding, according to the University of Minnesota Law School. 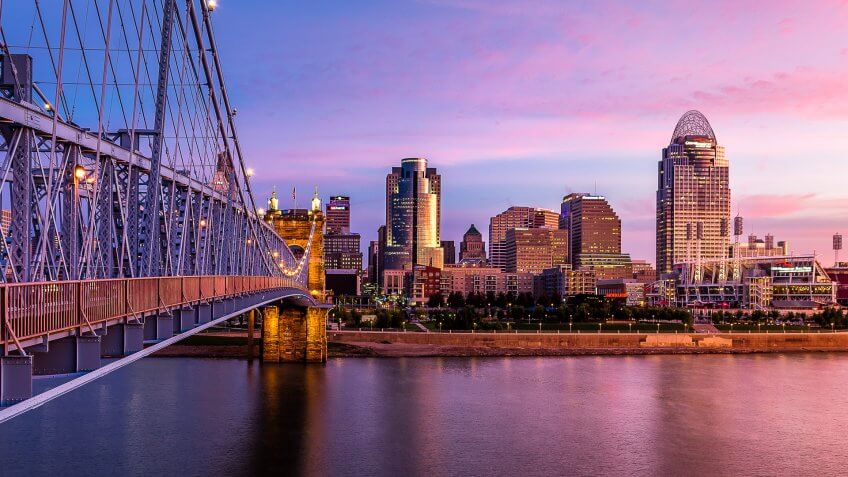 Cincinnati had the third-highest increase in per capita income out of the 20 cities on this list. However, Cincinnati has a large low-income population living in declining neighborhoods, and it lost more than 150,000 residents between 1970 and 2017. 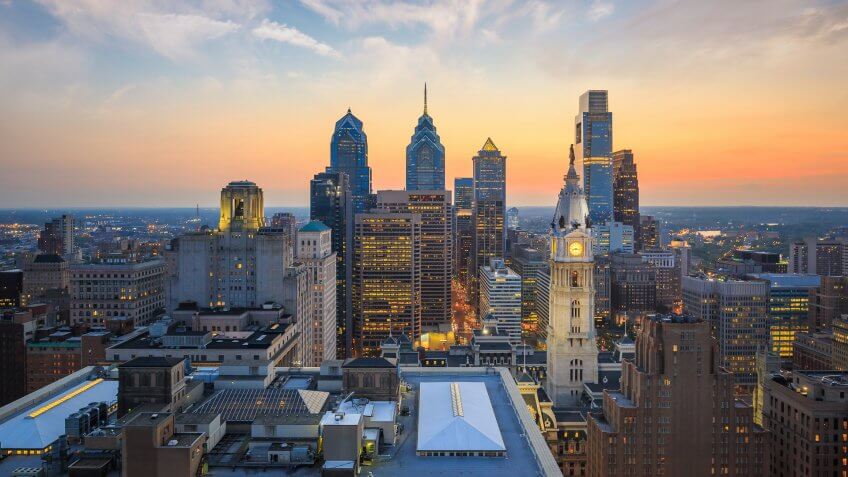 Philadelphia lost nearly 400,000 residents between 1970 and 2017 — the third-highest number on this list. Many of these residents moved to the suburbs, which are now seeing pockets of poverty as well. While Philadelphia sits outside of the Rust Belt, the city has suffered from deindustrialization since the mid-20th century. 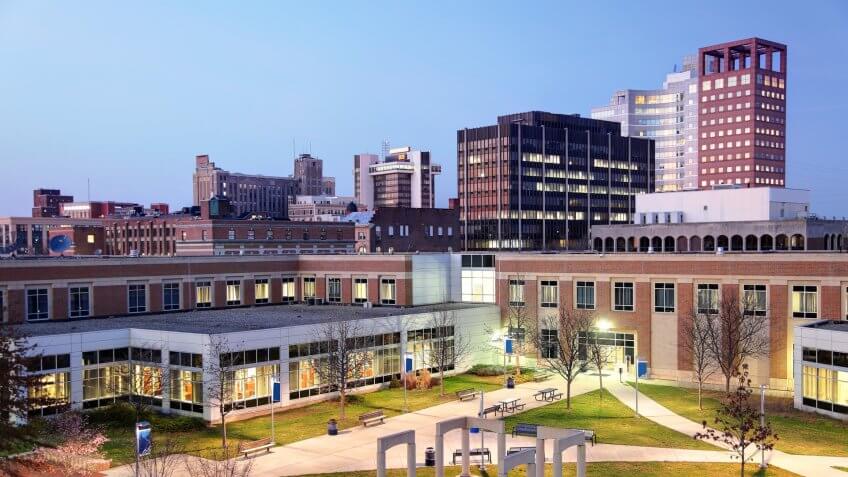 Bridgeport is located in Fairfield County, which has one of the most extreme rates of income inequality in the nation. Fairfield, Connecticut — a very affluent town near New York City — is neighbor to Bridgeport, the 11th-poorest city in the country. On the bright side, Bridgeport had the smallest decline in population of any city on GOBankingRates’ list, losing fewer than 10,000 residents from 1970 to 2017. 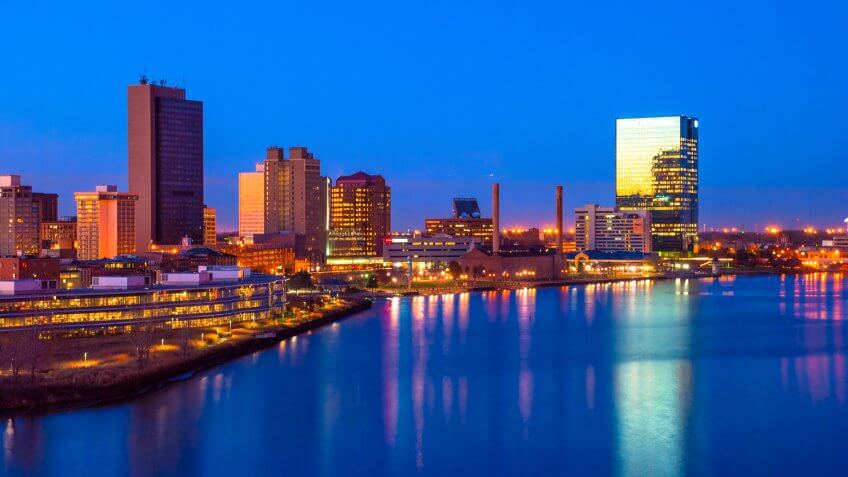 One of four Ohio cities on GOBankingRates’ list, Toledo had a poverty rate of 9.2% in 1970. By 2017, 26.5% of residents were living in poverty — an increase of more than 17 percentage points. Like many nearby cities, Toledo was impacted by the troubles of U.S. automakers and other domestic industries beginning in the 1970s. 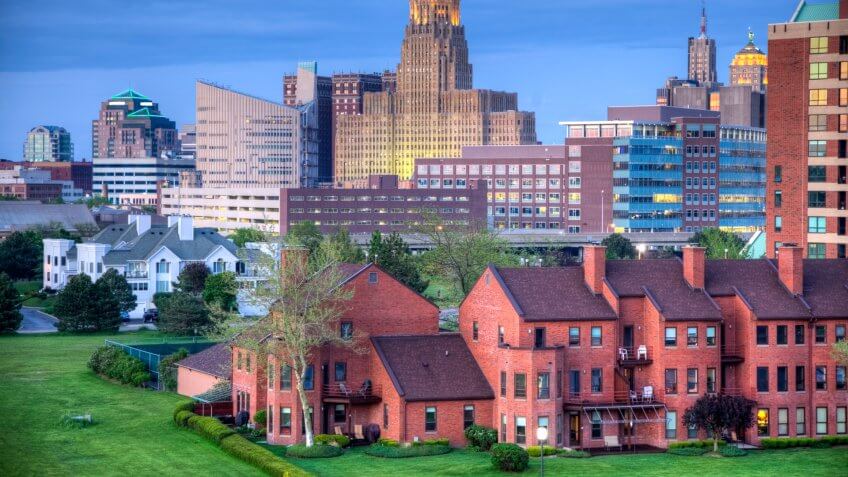 Buffalo has seen virtually no change in its per capita income since 1970, and median household income in the city has declined moderately. But poverty has become more concentrated in Buffalo as neighborhoods are being abandoned. About 30% of Buffalo residents live in neighborhoods that are strongly declining. 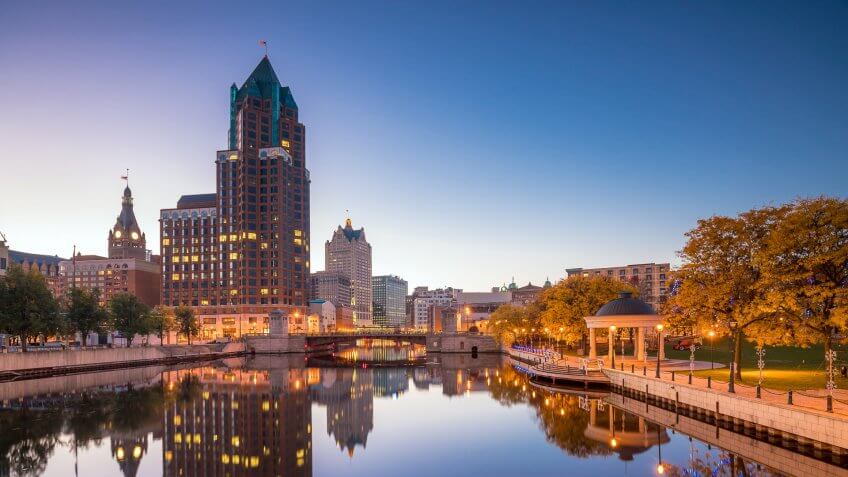 Prior to the 1970s, Milwaukee was a bustling manufacturing city. Companies like Allis-Chalmers, a manufacturer of agricultural equipment, provided many Milwaukee families with union wages and benefits. But, as companies closed their union plants and laid off workers, poverty increased in the city. As of 2017, 27.4% of Milwaukee residents live in poverty. 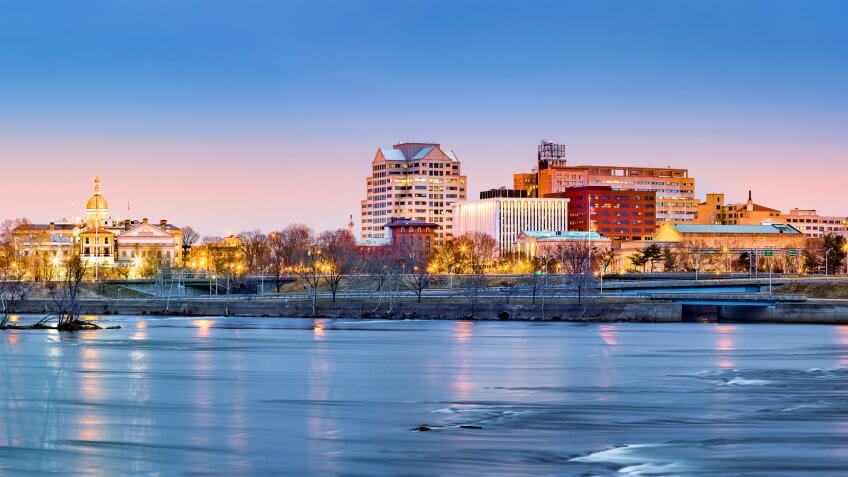 The minimum wage in New Jersey is $8.85 per hour. A full-time, year-round job at that rate pays less than the federal poverty level. There are higher-paying jobs in Trenton, but many of them are filled by people who live outside of the city. In fact, just 18% of Trenton jobs are held by city residents. Additionally, Trenton had the fourth-largest decline in per capita income of any city on this list. 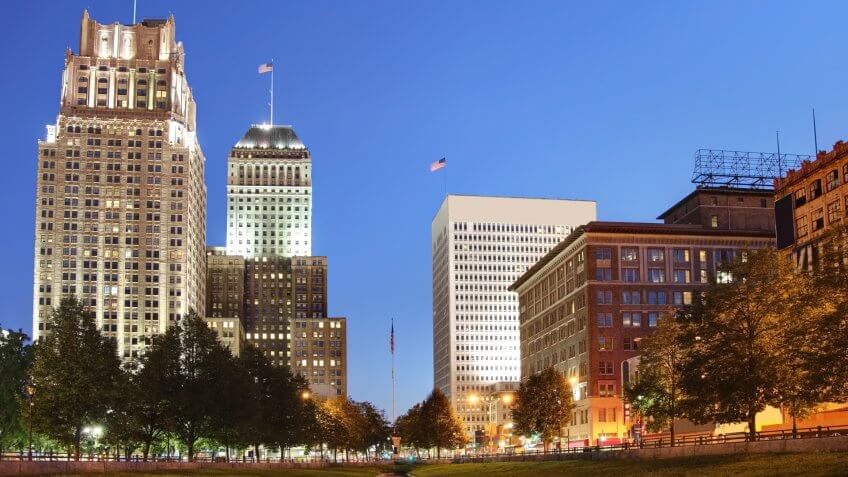 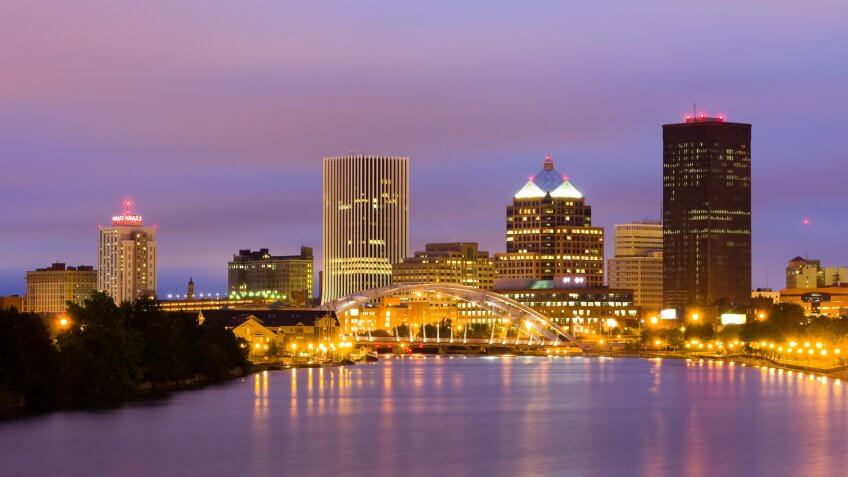 Rochester had the fourth-largest decline in median household income of any city on GOBankingRates’ list. It also had the third-largest increase in poverty rate, going from 7.4% in 1970 to 33.1% in 2017. Though it’s outside of the Rust Belt, Rochester had a large manufacturing presence for much of the 20th century, led by Kodak — which declared bankruptcy in 2012. 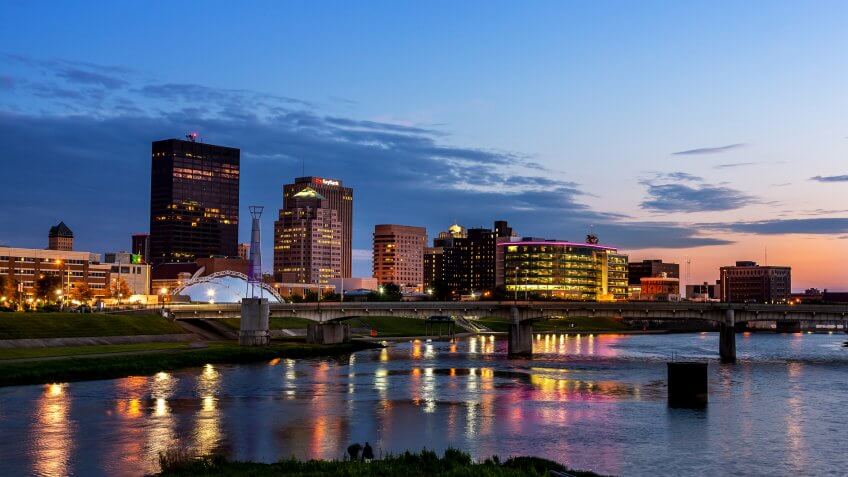 Dayton was once an industrial powerhouse, with large plants owned by the likes of General Motors, Phillips Industries, the NCR Corp. and more. However, since 1970, Dayton has seen the fifth-largest decline in median household income of any city on this list. It also had the fourth-largest increase in poverty. The poverty rate in Dayton was 8.0% in 1970 and swelled to 32.7% in 2017. 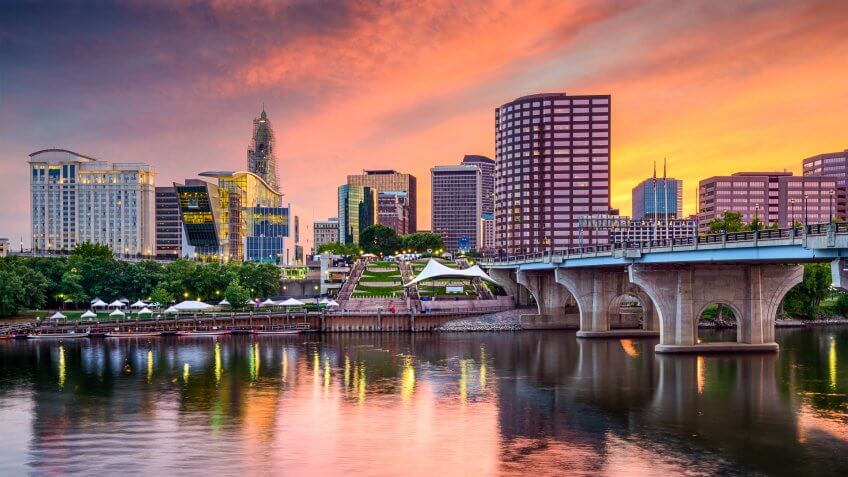 With its proximity to New York and large employee base, Hartford was once the darling of companies like General Electric and Aetna Inc. Since 1970, however, Hartford has seen the third-largest decline in per capita income and the second-largest decline in median household income of any city on GOBankingRates’ list. It also had the fifth-largest increase in poverty, going from 6.9% in 1970 to 30.5% in 2017. 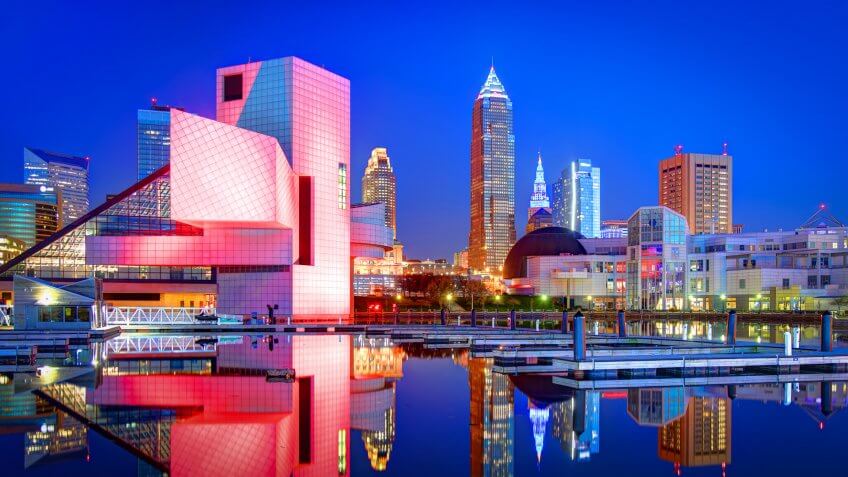 At 48.7%, Cleveland has the highest rate of child poverty among the largest U.S. cities, according to the Center for Community Solutions. The city also saw the second-highest increase in poverty of any city on GOBankingRates’ list, going from 9.0% in 1970 to 35.2% in 2017. Between 1970 and 2017, Cleveland saw the fifth-largest per capita income decline and lost the fourth-highest number of residents. 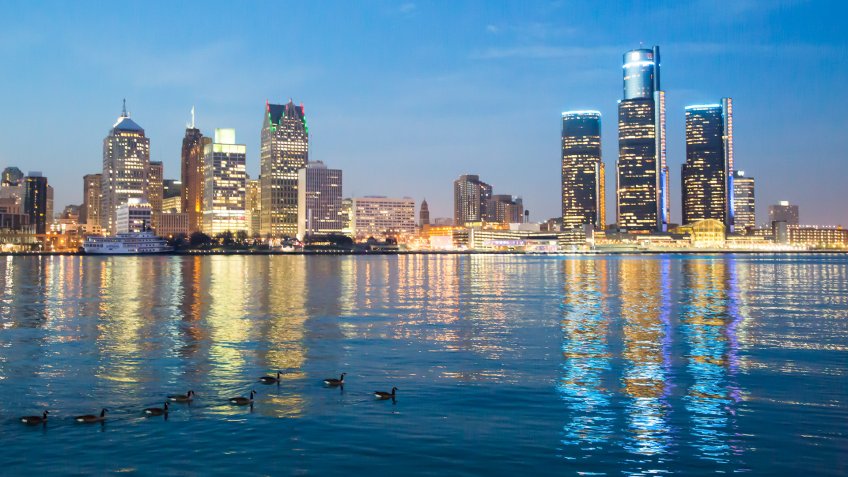 As the city with the most poverty in the U.S., Detroit continues to suffer from the automation and export of high-wage manufacturing jobs that made the city so prosperous in the first half of the 20th century. The auto industry, on which Detroit relied so heavily, began its decline in the 1970s and was hit hard during the Great Recession.

Of all the cities in this study, Detroit experienced the greatest decline in median household income, and only Newark saw a greater decline in per capita income. On top of that, Detroit lost nearly 1 million residents between 1970 and 2017 — the most of any city. It also had the largest increase in poverty, going from 8.5% in 1970 to 37.9% in 2017. 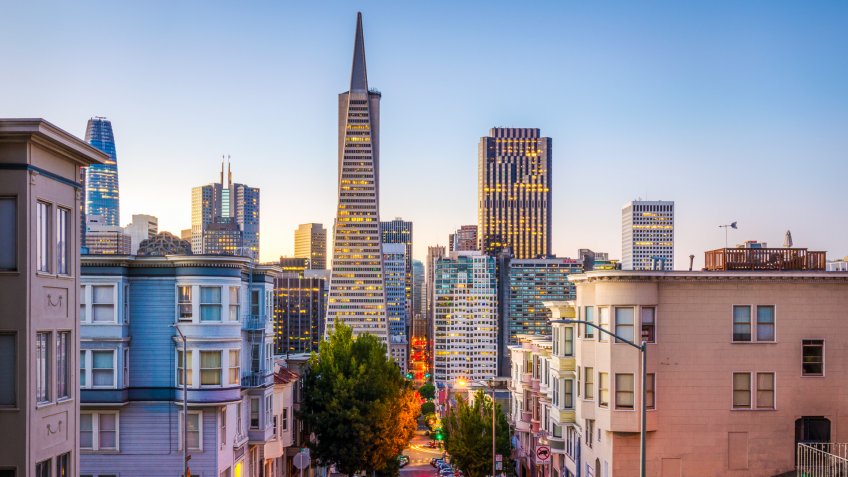 25 Cities Where the Middle Class is Thriving

See where middle-class incomes are rising.