Biden Reaches Historic Bipartisan Agreement with Senators for Infrastructure Package: ‘We Have a Deal’ 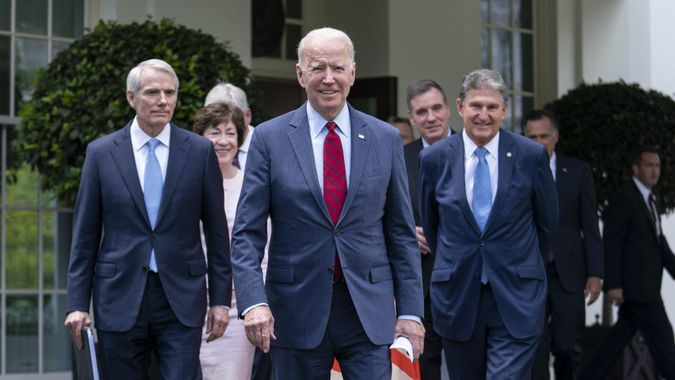 President Joe Biden and a group of both Republican and Democratic senators reached a compromise Thursday morning on the president’s roughly $1 trillion infrastructure spending bill.

See: Biden Trims Infrastructure Package — What Does That Mean for Jobs and Small Businesses?
Find: When You Can Opt Out of Monthly Child Tax Credit Payments — And Why You Might Want To

One of the largest proposals in recent history, the plan calls for a restructuring of the nation’s roads, transportation systems, railways, ports and ethernet networks, to name a few items on the agenda.

Speaking outside the White House flanked by Sens. Mitt Romney (R-Utah) and Mark Warner (D-Va) Biden stated, “They have my word. I’ll stick with what we’ve proposed and they’ve given me their word as well,” he said, according to CNBC.

“None of us got all that we wanted. I didn’t get all that I wanted. But this reminds me of the days we used to get an awful lot done up in the United States Congress.”

While details of the compromise have not yet been released, the next hurdle before the plan gets signed into law is deciding how to fund it. One of the plan’s biggest challenges, senators have not yet finalized how the proposal would raise revenue. Republicans promised not to touch the tax cuts enacted in 2017 and Biden claimed he will not raise gas taxes or electric vehicle user fees, CNBC noted.

The pushback from Republicans to maintain tax cuts could also potentially see a retreat on Biden’s plans to raise the corporate tax rate.

See: How To Go Back To Work And Still Keep Unemployment Benefits
Find: Here’s a Full List of Unemployment Resources for Your State

With the support of 11 Republican senators and 10 moderate Democrat senators, the bill would surpass the 60 votes needed to overcome a potential filibuster if all Senate Democrats were to vote in favor. If the deal goes through final approval in the Senate, it will then move over to Congress for approval before it can be signed into law. With a Democrat-controlled House, the bill is expected to have an easy passage through Congress.

The current plan is a trimmed-down version of the original 2.3 trillion dollar infrastructure plan the president brought to the table earlier this year. Corporate tax hikes and other taxes on the wealthy, like the tax Biden proposed on those making more than $400,000 a year, are expected to be in the Democrats’ reconciliation bill instead, USA Today reports. The Biden administration has also stated it will not repurpose or re-allocate funds already promised to states and counties as part of the COVID-19 relief package.