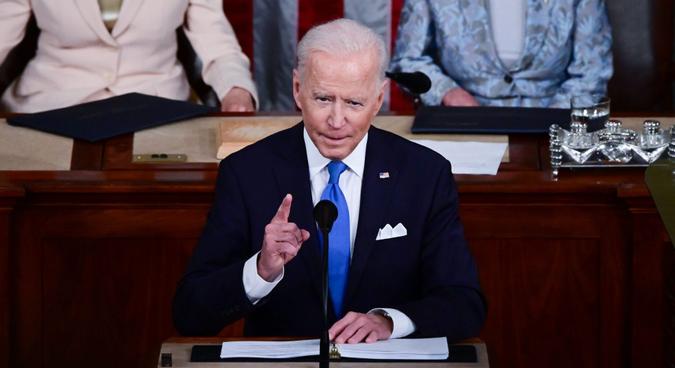 He stated that his plan “guarantees four additional years of public education for every person in America. We add two years of universal high-quality pre-school for every 3- and 4-year old in America.”

The other two years come in the form of two free years of community college. The plan will also guarantee that low-to-middle-income families will “pay no more than 7% of their income” for child care up to the age of 5. He also stated the most hard pressed families will receive it entirely free.

Chief among the added benefits is also a proposed 12 weeks of paid family and medical leave.

To round out the family benefits, Biden proposed making the current temporary child tax credits given as a part of the Covid-19 relief bill, permanent. Up to $3,000 for children over the age of 6 and up to $3,600 for children under the age of 6 is being pushed to remain available until 2025.

Biden also touched on the American Jobs Plan, his $2.3 trillion infrastructure spending bill. He claims that this spending will ultimately create jobs to upgrade transportation infrastructure, replace 100% of the nation’s lead pipes and “creates jobs connecting every American with high-speed internet including 35% of rural Americans who still don’t have it.”

See: House Bill Pushes to Make Child Tax Credit Permanent
Find: What to Do With the $3,000 Child Tax Stimulus

Jobs will also be created for building of wind turbines, something the president expressed there is no need to be built in China, as they currently are. Jobs created by the laying of transmission lines and installing 500,000 electrical charging stations for cars were also noted.

Additionally, he also pushed for raising the minimum wage to $15.

Of the more controversial aspects of his speech is how he plans to fund his ambitions. Biden plans to pay for these proposals largely with tax hikes on the wealthiest Americans and corporations.

The tax hike will not include the majority of American households though. Biden explicitly stated in his speech though: “I will not impose any tax increases on people making less than $400,000 a year.”

See: A Fourth Stimulus Check Might Be on the Way
Find: Biden’s American Rescue Plan Will Lower Taxes by an Average of $3,000

He proposes taking the 1% — those making $400,000 or more per year — back to a 39.6% income tax level. It currently sits at 37%. Biden also states that he will ” get rid of the loopholes that allow Americans who make more than $1 million a year pay a lower rate on their capital gains” than lower income Americans pay on their income tax. One of his more controversial tax increases, he went on to stress that this would “only affect three tenths of 1% of all Americans” estimated at “billions of dollars.”

In his video response, Scott stated “Republicans support everything you think of when you think of ‘infrastructure.’ Roads, bridges, ports, airports, waterways, high-speed broadband — we’re all in!” before going on to add that “less than 6% of the president’s plan goes to roads and bridges. It’s a liberal wish-list of Big Government waste … plus the biggest job-killing tax hikes in a generation. Experts say, when all is said and done, it would lower Americans’ wages and shrink our economy.”

The comments were not led or concluded with details as to how.

Scott also expressed discontent with the spending and taxing that would be necessary to push the Family Plan, eventually all to “put Washington even more in the middle of your life — from the cradle, to college.”

The only Black Republican in the Senate, Mr. Scott is considered a possible 2024 presidential candidate, reports the WSJ.