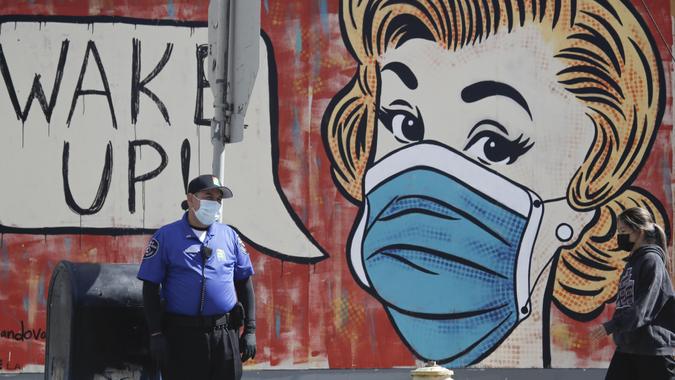 The Ronald Reagan Presidential Library in Simi Valley, California, is a reminder that 30 or 40 years ago, the Golden State was a Republican stronghold and a hotbed of conservative intellectualism. Today, the California GOP is on life support and the state is the crown jewel of Blue America. But one thing hasn’t changed–California is on the front lines of America’s culture wars, which made it a fitting battlefield for the highly politicized, highly controversial and highly emotional tug-of-war between the forces that wanted to keep the economy open and those who wanted to shut it down.

Read: These 47 Billionaires Got Richer During the Pandemic

The virus only intensified America’s deep cultural and political divisions, which were at the forefront of the quarrel over shutting down the economy. From the beginning, a person’s position on the issue was one of the most reliable indicators of who they voted for.

“The war between salvaging the economy versus eradicating the pandemic is a conundrum,” said Jolene Caufield, a master of science in professional health studies and senior advisor at medical/health/wellness nonprofit Healthy Howard. “People need to earn money to feed and house themselves but, at the same time, they also want to keep themselves safe from the virus.”

See: Almost Every State Is In Debt Thanks to COVID-19 — What Now?

California Made a Great Case Study

Home to nearly 40 million people and a $2.79 trillion GDP, California’s population and economy are enormous, diverse and complex–just like the United States as a whole.

“California epitomizes the tension of the COVID lockdown,” said Jason Reed, an author, advocate and doctor of pharmacy with nearly two decades of experience. “The economy of California is as large as many foreign nations’ total economies. With so many large cities and ports, it causes a ripple effect through the rest of the country when that large, robust economy is brought to its knees.”

Find Out: How COVID-19 Changed Retirement for Everyone

Like the U.S., California Is an Inconsistent Hodgepodge of Laws

Despite its enormous population and geographic size, California’s government is highly decentralized–and the exact same thing could be said about the United States in general. That dynamic, according to the Guardian, favors pandemics over people because it ensures that protocols, policies and messaging will be inconsistent from region to region and city to city. That regional inconsistency sowed confusion, misinformation and resentment in California and the country, which intensified the already roiling distrust and tension between pro- and anti-lockdown forces.

More: 25 Experts’ Predictions on When We Will Bounce Back From COVID-19

Like the U.S., California Is One Big Underlying Condition

Viruses are much better at ravaging populations that are already unhealthy. COVID-19 arrived in a United States that was a profile in poor health–and California was no exception.

“The obesity epidemic that is upon California puts many people at increased risk of COVID,” said Reed. “With so many having this risk factor, it makes it more difficult to easily reopen the economy.”

Read: COVID-19 Totally Changed How We Spend Our Money

America and California Are Socially Unhealthy, Too

There was another dynamic that fueled both the virus and the tension surrounding the shutdowns in California and the country. Everywhere it went, the pandemic was cruelest to poor communities and communities of color, which are often one and the same. Viruses are not capable of racism or hostility to the poor, but people, governments and healthcare systems certainly are.

The virus also arrived in a country where the forces behind those disparities were already hard at work. When the pro-shutdown/anti-shutdown lines were drawn, the sides often broke along the familiar lines of race, income and political persuasion.

The Cure Is Consistency, Honesty and Flexibility

If California and the country are ever going to close this chapter, their leadership will have to be honest about their successes and failures, level with the population about what it’s up against, not spread misinformation for political gain, be consistent in messaging and policy and offer concessions in exchange for the same from their opponents. These basic leadership 101 traits were almost entirely absent from America’s pandemic response in 2020.

Find Out: How To Keep Supporting Your Local Small Businesses During COVID-19

“By informing people to always wear a mask, social distance and be aware of how serious the pandemic is, then we can make it easier for the economy to open again since people are more willing to follow rules set in place when they’re properly informed,” Caulfield said. “It is also important to relay information about the efforts being taken to curb the disease in a clear, easy to source and transparent manner so that people can feel confident that something is being done and that they know up-to-date information about the disease.”