Why the Debt Ceiling Is Always Up for Debate 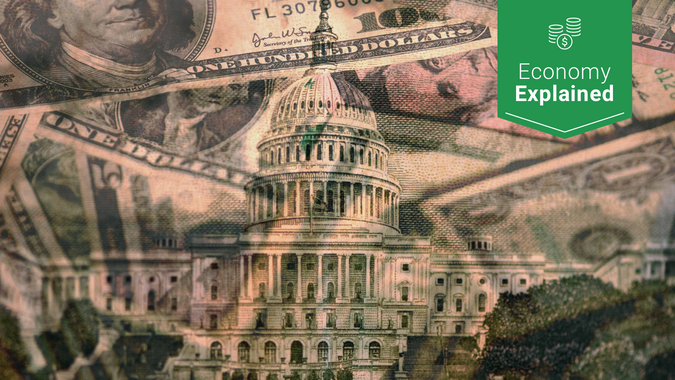 The debt ceiling is an economic and political peculiarity that’s almost exclusively unique to the United States. Poland has something similar, according to The New York Times, and Denmark technically has a debt ceiling, but it’s so high that raising it is never an issue the way it is in America.

Social Security Uncertainty: How Realistic Is the Possibility of Debt Ceiling Issues Delaying Payments?
The Economy and Your Money: All You Need To Know

And boy, is it an issue in America.

The U.S. has never defaulted on its debt obligations, but it has come close a few times in high-stakes games of political chicken that now occur so frequently they’ve come to be expected. Both parties are currently spinning their sides after narrowly averting a government shutdown with a band-aid fix that kicks the can down the road until December.

So, what does it all mean and why does the country always seem to keep circling back to the same argument?

More Economy Explained: What Is Inflation and What Does It Mean When It Goes Up or Down?
See: How Interest Rates Affect Your Wallet and the Bigger Economic Picture

What Is the Debt Ceiling?

The United States runs budget deficits, which means the government spends more money than it collects in tax revenue. In order to pay its bills — things like Social Security payments and salaries for military personnel — the government borrows enormous sums of money by issuing Treasury bills and bonds.

The national debt is now $28.86 trillion. For context, the U.S. GDP — the entire combined economic output of the richest country in the world — is less than $21 trillion. Knowing that, it might be hard to believe that there’s a limit as to how much the government can borrow. But there is.

That limit is known as the debt ceiling.

Find Out: Understanding the Differences Between Inflation, Deflation & Stagflation

Why Is There a Limit and Who Sets It?

The Constitution declares that all federal borrowing must be authorized by Congress. In the early 20th century, debt limits were introduced so the Treasury could issue bonds without getting permission from Congress every time it had to spend money.

The solution was for Congress to cap the amount that the government could borrow and then periodically revise that cap as future borrowing requirements grew.

Why Are Debt Ceiling Politics So Heated?

Raising the debt limit used to be a routine part of standard, nuts-and-bolts government operations, according to The New York Times. Then, in 1976, Gerald Ford triggered the first partial government shutdown when he vetoed a spending bill over a budget disagreement, according to NPR.

It was the first of many. There would be five partial shutdowns during President Jimmy Carter’s term and eight during President Ronald Reagan’s administration. But they were much narrower in scope and far less heated than the political gladiator battles that surround today’s debt ceiling talks.

Everything changed in 1995-96 when the GOP-controlled Congress forced a painful, 21-day government shutdown — the longest in history — during an ideological showdown with President Bill Clinton.

According to NPR, the politically unpopular move backfired so badly that there wasn’t another shutdown until the 2010s. Shutdowns are political grenades that almost always explode in the hands of whichever side forces one as leverage. The Republicans were reminded of this when a shutdown over Obamacare backfired. The Democrats swallowed the same pill when they were defeated after forcing a shutdown over DACA legislation.

Shutdowns Are Frustrating and Destructive

The reason that debt ceiling politics are so unpopular is that government shutdowns have real consequences that real Americans feel in real life. According to the Committee for a Responsible Budget, this is what happens when a country stops funding its government:

Learn: Why Inflation’s 6% Cost-of-Living Increase to Social Security Could Be a Double-Edged Sword

But Default Would Bring Catastrophe

During shutdowns, emergency actions are taken to prevent the government from going into default, which it will if it fails to make interest payments on the money it has already borrowed. If that happens, inconveniences will be the least of the country’s problems.

Treasury Secretary Janet Yellen recently told ABC that “a failure to raise the debt ceiling would probably cause a recession, and could even result in a financial crisis … It would be a catastrophe.”

A report from Moody’s Analytics backs that assertion, estimating that defaulting on the national debt would wipe out $15 trillion in household wealth and cost 6 million American jobs. The report predicts a stock market crash, severely tightened credit markets, more expensive business lending and higher credit card interest rates. There’s also the little thing of the United States being revealed as a deadbeat nation to a watching world.

The government avoided that calamity this go-around, but it will have another chance to create a self-inflicted crisis come December, so stay tuned.