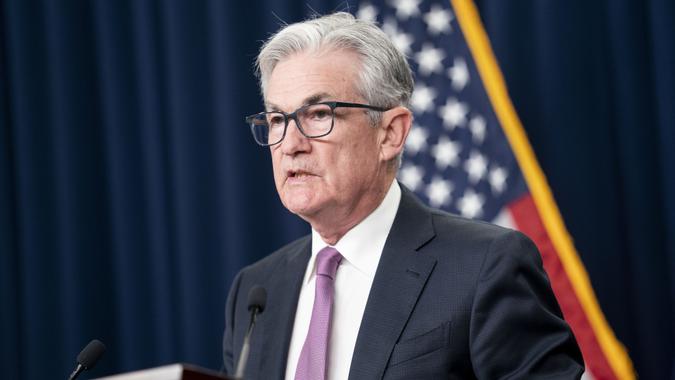 As was widely anticipated, the Federal Reserve said it will raise interest rates by three-quarters of a percentage point rate, the third consecutive such hike. The new unanimous decision comes amid four-decade high inflation and fears of a looming recession.

Student Loan Forgiveness: Mark These 4 Dates On Your Calendar Now
Looking To Diversify in a Bear Market? Consider These 6 Alternative Investments

The Federal Reserve Board’s Federal Open Market Committee (FOMC) said in a statement on Sept. 21, that it decided to raise the target range for the federal funds rate to 3 to 3-1/4 percent and anticipates that ongoing increases in the target range will be appropriate, according to a statement.

“Inflation remains elevated, reflecting supply and demand imbalances related to the pandemic, higher food and energy prices, and broader price pressures,” according to the statement. “Russia’s war against Ukraine is causing tremendous human and economic hardship. The war and related events are creating additional upward pressure on inflation and are weighing on global economic activity. The Committee is highly attentive to inflation risks.”

Rusty Vanneman, Chief Investment Strategist, Orion Advisor Solution said that the Fed again has doubled down on its hawkish stance to combat historically high inflation with a 75 basis point increase in the benchmark interest rate, despite numerous other recent rate hikes and legislation.

“Markets are continuing to feel the stress of Fed rate hikes and will likely not begin their true rebound until significant reductions in CPI are observed, which appears could still be many months away, if not longer. More now than ever, the question is: how many more rate increases can the economy sustain before the markets feel extreme pain from the measures taken to combat inflation?” Vanneman added.

The Fed also said it expects the unemployment rate to rise to 4.4% by next year up from the 3.9% it had projected in June according to FOMC officials’ projections.

When asked what are the odds that favor a recession granted the 4.4% unemployment projected, Powell replied, “I don’t know what the odds are. There’s a very high likelihood of a period of below trend growth.”

Sylvia Jablonski Kampaktsis, CEO, CIO Defiance ETFs, said that any hopes of a Fed pivot in 2023 have been dashed, telling us that monetary policy will not be accommodative for the next 18 months at least.

“The latest language at a glance suggests that this is a reset, we need several months of proof that inflation is coming down, or we should expect higher for longer. The market ultimately does not want to hear that, and as such we see all three indices pulling back,” she said. “Until the Fed stops hiking, and we see inflation readings coming down, I expect to see this continued volatility and risk-off sentiment.”

How Does the Rate Hike Affect You?

Michele Raneri, vice president of U.S. research and consulting at TransUnion, said that from a consumer credit perspective, the greatest impact to borrowers of continued rate hikes will be seen in the mortgage market, and to a lesser extent, the credit card industry.

When interest rates rise, consumers who may otherwise be considering buying a home may instead choose to hold off in hopes that interest rates decline in the not-so-distant future. And in that environment, those who do choose to buy may be more likely to select an adjustable-rate mortgage because their initial monthly payments will be lower than those they would find with a fixed-rate mortgage, Raneri said.

“As an example of what homebuyers with good credit face today as opposed to before this year’s interest rate hikes: right now, the average monthly payment for a $300,000, 30-year fixed rate mortgage at the current 6.0% rate is approximately $1,800. This compares to a roughly $1,300 monthly payment at the 3.2% rate seen in January – about $500 a month higher,” Raneri said.

Raneri added that on the credit card front, this interest rate hike will impact consumers who do not pay off their credit card balances in full through higher minimum monthly payments.

“While the impact is relatively small in isolation, the cumulative effect of all five of this year’s interest rate hikes will cost the average consumer, with a credit card balance of about $5,200, about $156 per year, or $13 each month,” she said.

Raneri recommends that if consumers haven’t already evaluated their budget after feeling the impact of inflation, they should be starting it now.

“Have an emergency fund at the ready. Three to six months of expenses ideally, but even a few hundred extra dollars can prove valuable if unforeseen circumstances arise. Consumers should also take care to use credit diligently and with the understanding that as interest rates rise, so do minimum credit card payments. Consumers should take care to only use credit to the extent they are confident they can afford to make those payments and avoid delinquency,” she said.

Powell reiterated the importance of stabilizing the economy during the press conference saying, “higher interest rates are all painful for the public that we serve but not as painful as restoring price stability.”

However, David Russell, VP, Market Intelligence TradeStation Group, has a different take, saying the Fed is doubling down instead of backing down.

“Powell & Company want to crush inflation like a bug. They’re ignoring some positive signs of price easing and keeping the pressure on the economy. The Fed is willing to risk a recession to get inflation back to around 2%. Higher for longer is the new normal.”