Finishing high school gives you a sense of accomplishment. It’s the familiar path to higher education and higher earnings — college graduates earn twice as much as high school dropouts. But if you were to discuss this topic with some celebrities, they might argue that a traditional high school education isn’t the only path to success.

Some of your favorite singers, actors and entertainers didn’t finish high school. Read about 12 celebrities who dropped out of high school.

Jim Carrey’s family was poor and homeless after his father lost his full-time job. Carrey found work as a janitor and dropped out of high school at age 15 to help care for his sick mother. The breakthrough for his comedy career was the ’90s television show “In Living Color.” He starred in several blockbuster films, including “Ace Ventura: Pet Detective,” “Liar, Liar” and “Yes Man.”

Cameron Diaz dropped out of high school at age 17 to pursue modeling and signed with Elite Model Management. The model/actress/producer had a rough time at high school. “I used to get in fights with boys more than girls. For some reason boys liked to fight me,” she said. Her film credits include “The Mask,” “There’s Something About Mary” and “Sex Tape.”

Mark Wahlberg dropped out of school around age 13 or 14. He did a short stint in prison before turning his life around and starting his entertainment career — first as a hip-hop rapper, then an actor in films such as “The Perfect Storm,” “The Departed” and “Transformers: Age of Extinction.” He has also worked as a producer on shows like “Entourage” and “Boardwalk Empire.”

By studying online, Wahlberg received his high school diploma at age 42. His four kids were his motivation. “I didn’t want the kids saying, ‘You didn’t do it, so why do I need it?’ They are all wanting to do things in their future that require an education.”

Although he wanted to be a priest when he was growing up, Tom Cruise got the acting bug after taking acting classes. He didn’t want to wait until after high school to pursue his acting career, so he dropped out and moved to New York City. The actor/producer’s hits include the “Mission: Impossible” movies, “Jerry Maguire” and “Rain Man.”

Ryan Gosling dropped out of high school at 17 with dreams of making it on the big screen, but his entertainment career began on the small screen with the ’90s revival of “The Mickey Mouse Club” alongside Christina Aguilera and Justin Timberlake. His movies include “The Notebook” and “Crazy, Stupid, Love.”

Robert Downey Jr. had already started his acting career when he decided to drop out of high school at age 17. He was 20 when he landed a role on “Saturday Night Live.” The “Iron Man” and “Avengers” star is one of the highest paid actors in Hollywood.

Read: What ‘Avengers: Age of Ultron’ Stars Robert Downey Jr. and Chris Evans Are Worth

Keanu Reeves began acting when he was 9 but he didn’t pursue acting full time until getting expelled from high school at age 16. His hits include “The Matrix” series, “Bill and Ted’s Excellent Adventure” and “Speed.”

‘It was a very small school, and I guess I didn’t fit in. I had conflicts and run-ins with the staff. The principal and I didn’t see eye to eye,” he said. “I was one of those ‘Why?’ kids — I asked too many questions about everything. I couldn’t stop even if it got me into trouble.”

Drew Barrymore’s big break came at age 7 with “E.T. the Extra-Terrestrial.” Barrymore was in rehab at age 13 and became emancipated from her parents at age 15. So it might come as no surprise that she dropped out of high school at 16. The actor/director/producer eventually kicked her bad habits and now enjoys a career as a producer and actress with roles in “Charlie’s Angels,” “Blended” and “He’s Just Not That Into You.”

Hilary Swank was a child performer and athlete who dropped out of high school at age 16 because she didn’t have time for school. Swank’s credits include Oscar-winning roles in “Million Dollar Baby” and “Boys Don’t Cry” and an ironic role — an inspirational teacher — in “Freedom Writers.”

After signing a deal with Columbia Records, Jessica Simpson dropped out of high school at age 16. She later earned a GED and is also an actress and fashion designer.

Johnny Depp dropped out of high school at age 15 to pursue a music career. Two weeks later, he went back and told the dean: “‘I made a mistake and I’d like to try again.’ And bless him, he said, ‘Johnny, I don’t think that’s such a good idea. You love your mu­sic. That’s the only thing you’ve ever applied yourself to. Go out there and play.'”

His singing career never took off, but he found success on TV with “21 Jump Street” and movies such as the “Pirates of the Caribbean” series and “Charlie and the Chocolate Factory.”

Before Katy Perry was a pop superstar, she was a Christian music singer who dropped out of high school at 15 to pursue her dream.

Despite her success — three studio albums, with her fourth expected in 2016 — she regrets dropping out and later got her GED. “I’m kind of bummed at this stage that I didn’t have a great education,” she said in 2014 at a fundraiser for teachers. “I could really use that these days.” 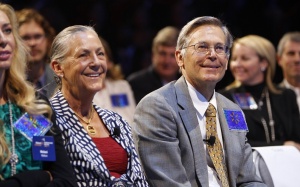 America’s 10 Wealthiest Families and How They Got Rich