How Much Award Show Hosts and Performers Get Paid 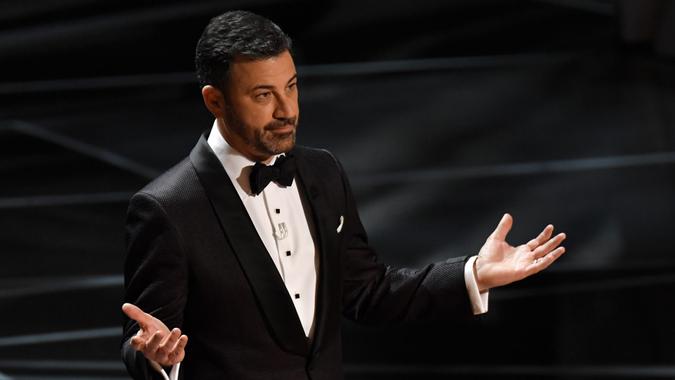 January is typically the start of the most glamourous time of the year — awards season. However, award shows have been pushed back this year due to the COVID-19 pandemic.

Hosting an awards show is a huge deal, as the live program is televised to millions, and the venue itself is filled with some of the biggest names in the entertainment industry. Therefore, you would think hosts are paid a premium — but that’s typically not the case.

Fey and Poehler reportedly earned top dollar — in terms of award show host pay — in the past for their work on the Golden Globes. The duo previously hosted the awards show from 2013-2015 and were reportedly paid in the low six figures, according to Variety.

Largely considered Hollywood’s biggest night, the Oscars are filled with glamour, so it’s easy to assume the award show’s host is paid big money; but that’s not the usual practice, according to Alec Baldwin. Baldwin hosted the Oscars in 2010 with Steve Martin and later hinted about his pay to The Hollywood Reporter.

“They don’t pay you any money; the Oscars pay you like chicken feed,” Baldwin told the publication in 2013. “It’s all about the honor of helping to extol film achievement.”

Baldwin didn’t cite an exact salary, but in 2013, The Hollywood Reporter revealed the average Oscars host fee was $15,000-$25,000. Seth MacFarlane hosted that year and was reportedly paid above the $15,000 SAG-AFTRA minimum.

In 2016, Jimmy Kimmel confirmed the Oscar host pay himself. During an appearance on KROQ’s Kevin & Bean morning show, he revealed he would earn $15,000 to host the then-upcoming 2017 Academy Awards.

“I think it’s illegal to pay nothing,” Kimmel joked during the interview.

While the pay for hosting the Oscars isn’t great, it’s thought to be the only major awards show that compensates performers.

Recent salary information isn’t available, but in 2013, The Hollywood Reporter shared data that offers a general idea. Specifically, artists performing a nominated song earned at least $3,500, while union rates for solo artists started at $2,400 and ensembles were paid at least $5,000.

On the Small Screen: Here’s How Much Jennifer Aniston and Other Actors Get Paid for Their Reruns

If you think the pay for hosting the Academy Awards is bad, the Grammys can be even worse. In 2017, a SAG-AFTRA spokesperson confirmed to Forbes the minimum required salary for a Grammys host is $5,000. However, James Corden hosted the Grammys that year and Forbes estimated he earned around $20,000 for his work.

Corden’s salary certainly isn’t much by Hollywood standards, but it’s a lot more than Tiffany Haddish was offered to host the 2021 Grammys pre-show. In an interview with Variety, the comedian revealed she was asked to host the three-hour live-streamed event for free, while also footing the bill for her hair, makeup and wardrobe.

Haddish turned down the offer, and shortly after the interview was made public, Recording Academy interim chief Harvey Mason Jr. apologized for the incident. He referred to the situation as a “lapse in judgment” made by a talent booker.

So there you have it — hosting an A-list awards show doesn’t typically come with a hefty paycheck. Celebrities chosen for these gigs likely earn more by doing pretty much anything else. However, the right person can likely have a lot of fun with the gig and enjoy the bragging rights that come with having hosted one of the most glamorous nights in show business.