Americans have a problem with plastic that’s not about single-use water bottles or grocery bags. It starts in shoppers’ wallets or anywhere they’ve saved their credit card information for one-click convenience.

Credit card balances ballooned to $868 billion for U.S. households in the second quarter of 2019, up from $848 billion in the previous quarter, according to a recent report from the Federal Reserve Bank of New York. So, it’s no surprise that a quarter of the respondents in GOBankingRates’ new survey on credit card habits and knowledge cited credit card debt as a major source of financial stress. On top of that, one-fifth of the respondents confessed they don’t fully understand the basics behind fees and interest rates — which may be contributing to their growing credit card balances.

At the same time, getting rid of credit card debt for good is the top financial priority for many Americans. Keep reading the survey results to gauge where you land on the spectrum of credit card spending.

What Are You Willing To Do To Avoid Credit Card Debt?

According to the GOBankingRates survey, many Americans are willing to make big sacrifices in order to reach their financial goals — and that includes starting a family. In fact, 11% of respondents said they’re willing to give up having children, and 10% said they would sacrifice marriage if it meant never falling into credit card debt. A smaller but still significant percentage of Americans — 6% — said they’re willing to surrender both having children and getting married.

On the flip side, more than half of those polled said they aren’t willing to give up any of those things to avoid credit card debt — which might help explain why some Americans are struggling to maintain control over their finances.

24% of Americans Are Stressed About Their Plastic Debt

Many Americans face stress on multiple financial fronts, according to GOBankingRates’ survey. Monthly bills, excluding debt payments, came in at the top of the list, with nearly 52% of those polled citing their bills as a significant stressor. More than 24% of respondents said they’re worried about credit card debt, over 23% fear a financial downturn or recession in the near future, and nearly 19% said student loan debt is a source of stress — meaning that Americans are more concerned about credit card debt than a recession or their student loan debt.

Baby boomers were the most likely to cite credit card debt as a source of financial stress, with more than 31% of respondents ages 65 and older choosing this option. That compares with just under 12% for adults ages 18-24 — the youngest group polled. But concern over plastic debt appears to be more prevalent for millennials, with more than 29% of those ages 25-34 placing credit card debt on their list of financial worries. The trend continues for members of Generation X, with over 27% of 35- to 44-year-olds polled citing credit card debt as a key stressor.

Gender also had some impact on the survey results. Women expressed more concern over monthly financial obligations — including bills, credit card debt and student loan payments — than men, while men were more likely than women to cite their jobs and investment portfolios as sources of stress. Interestingly, investments ranked last on the list of financial stressors for both men and women.

Americans might be easily tempted by the convenience of swiping between billing statements: Nearly a quarter of those polled said they rely too much on their credit cards. Older Americans were most susceptible to the pull of plastic, with nearly 39% of respondents 65 and older admitting overreliance compared with about 11% of millennials, who are the age group that indicated the least dependence on credit.

Those figures are somewhat surprising since respondents 65 and older were more likely to understand credit card interest rates and fees. Just under 8% said they’re confused about interest rates, and less than 13% said they don’t fully understand fees. Comparatively, nearly 26% of millennials said they’re confused about interest rates, and over 28% were foggy on fees. Respondents ages 65 and older were also much more likely to compare credit cards before committing, with only about 13% saying they don’t weigh their options versus nearly 23% of millennials.

Overall, more than 21% of survey respondents across all age groups said they don’t fully understand interest rates, 19% said they’re confused about fees, and more than 12% said they don’t compare credit cards. Americans’ lack of spending savvy also comes through in how some people use credit cards to cover everything from major electronics purchases and lavish vacations to taxes and college tuition.

Expensive electronics were the most common credit card splurge, followed by pricey trips. You can benefit from rewards points and other incentives with both types of purchases — but only if you pay your balance in full. For the 13% of survey respondents who said they don’t consistently make credit card payments, the points and miles accrued aren’t worth the hefty interest charges.

Additionally, paying your taxes and college tuition on a credit card often comes with additional fees beyond interest rates, which could quickly cancel out any rewards earned. It’s worth noting that younger Americans were more likely to use plastic to pay for practical expenses like higher education costs and IRS bills.

Although they don’t always make the best choices when it comes to credit, many Americans are striving to ditch debt for good. Roughly 1 in 5 survey respondents ranked paying off credit card debt No. 1 on their list of financial goals. Older Americans were even more likely to emphasize resolving credit card debt, with nearly 38% of respondents ages 65 and older listing this option as their most important money concern.

Survey Question: Which of the following is your top personal finance priority?

Pay Off Your Debt Faster: 101 Side Business Ideas

How To Manage Your Plastic Debt and Financial Stress

Judging from how Americans handle plastic, some people might not be making wise choices when it comes to using their credit cards. After all, 13% of those surveyed said they don’t always pay their monthly minimums, and some 12% said they don’t compare credit cards before signing up for one. Americans could be missing out on credit cards that offer fewer fees or a lower annual percentage rate by not understanding the financial fine print.

That might also explain why nearly 40% of survey respondents said cash-back cards are generally the best cards for consumers looking to manage debt. However, many financial experts would agree that the pitfalls of using credit cards can easily outweigh the payoff. Indeed, cash-back cards aren’t typically suitable for people who make unnecessary purchases to chase rewards and don’t pay off their monthly balances in full.

Survey Question: Which one of the following credit cards do you think is (generally) the best card to manage debt?

While cash-back cards proved popular in GOBankingRates’ survey as a method for managing debt, secured credit cards are a much better means for this purpose. Secured credit cards typically require a deposit equal to the credit limit, which means cardholders can’t carry balances bigger than their original deposit. Secured credit cards can be a good option for consumers who need to build — or rebuild — their credit history, or those who want to avoid the temptation to charge more than they can pay off in a reasonable period of time.

If you want to forgo financial stress from the plastic in your wallet, you should educate yourself on the fine print, curtail your credit card usage and leave the cash-back rewards to those who have their money matters in check. 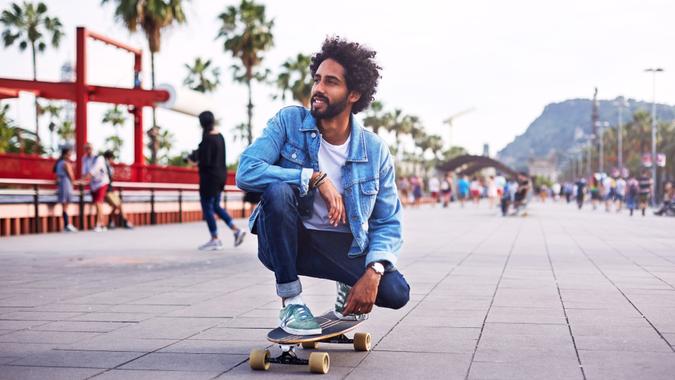 Check out these credit card tricks to make and save money.