Home ownership is part of the American dream, but most people can’t afford to pay cash and buy a house outright. As an alternative, prospective homebuyers typically finance a large portion of the home’s value via a home mortgage loan.

To meet the varying needs of borrowers, the mortgage industry has developed a number of different types of home loans that offer fixed- and variable interest rates. Some of the most popular types of mortgage loans are the 30-year fixed mortgage, the 15-year fixed mortgage and the five-year adjustable-rate mortgage, or ARM. Learn about the differences in mortgage rates, so you’ll know if you are going to get the best deal from your mortgage loan lender.

What Is the Average Mortgage Rate?

Current mortgage interest rates can vary from state to state — and from bank to bank — but most rates are in a fairly narrow range. Here’s a look at national average mortgage rates you can expect from mortgage brokers so you can compare mortgage rates across the U.S.

The 30-year mortgage has been around since 1934 when mortgages of 25 to 30 years were first created by the FHA. Today, the 30-year fixed-rate mortgage serves as the go-to mortgage for the majority of homebuyers due to its more affordable payments and predictable interest rate, according to Realtor.com.

As of 2017, the average 30-year fixed mortgage rate across the U.S. is 3.71 percent. For the most part, 30-year mortgage rates are in a tight range, hovering right around the average. The four main outliers are Alaska, with the highest 30-year mortgage APR at 3.89 percent; followed closely by West Virginia, at 3.85 percent; South Dakota, at 3.83 percent; and Wyoming, at 3.80 percent.

On the other end of the scale, the lowest 30-year mortgage rate — 3.68 percent — can be found in the following states:

The main benefit for homeowners taking out a 30-year mortgage is the lower payment. Even with a higher interest rate, spreading payments out over 30 years, rather than 15, for example, can result in a dramatically lower monthly payment.

Learn More: How to Get a Mortgage

On the downside, your monthly payments for a 15-year fixed mortgage will typically be much higher than with a 30-year fixed mortgage. Although you’re paying less interest, you’re also paying off the principal on your mortgage in only half the time. Here’s an example showing the difference between what you’d pay for a 30-year mortgage versus a 15-year mortgage, given current average interest rates and a $250,000 mortgage:

Across America, 15-year fixed mortgage rates today, on a state-by-state basis, cluster pretty closely to the national average of 3.03 percent. There are some states, however, with higher current home loan rates:

On the low end of the scale, Connecticut and Maryland share honors with the lowest current mortgage rates of 3.00 percent. Eight other states carry average rates of just 3.01 percent:

Find Out: How to Pay Off Your Mortgage Early

Adjustable-rate mortgages are a hybrid type of loan in that the interest rate is usually fixed at first, but then fluctuates based on the rise or fall of an index chosen by mortgage lenders — commonly, an index tied to an investment in U.S. Treasuries. Adjustable-rate mortgages are popular because interest rates are typically cheaper initially than long-term, fixed-rate mortgages, such as the 30-year mortgage. In return for this lower rate, the borrower must accept the risk that the interest rate on the loan most likely will rise in the future, thereby increasing the number of monthly mortgage payments.

Mortgage interest rates today for five-year ARMs, on a national basis, are 3.12 percent, above the 15-year fixed rate but well below the 30-year fixed rate. The rate can adjust upward or downward, however, at the end of the five-year period.

Additionally, at end of the five-year term, mortgage payments can increase significantly regardless of where interest rates are if your mortgage was set up as an interest-only ARM instead of a regular ARM. With an interest-only ARM, borrowers only pay interest for the first five years of the loan, whereas with a regular ARM, borrowers pay combined interest and principal payments.

ARM rates across America show more variation than fixed rates. Alaska leads the pack again, with the highest five-year ARM rate of 3.43 percent, but others are not far behind:

The lowest rate is in Alabama at 3.04 percent, while Maine and South Carolina follow closely behind at 3.05 percent.

Find Out: The 10 Worst Things You Can Say to a Mortgage Lender

Now that you’re armed with the current average mortgage interest rates across the U.S., you can compare lender offers with confidence and find the best deal. 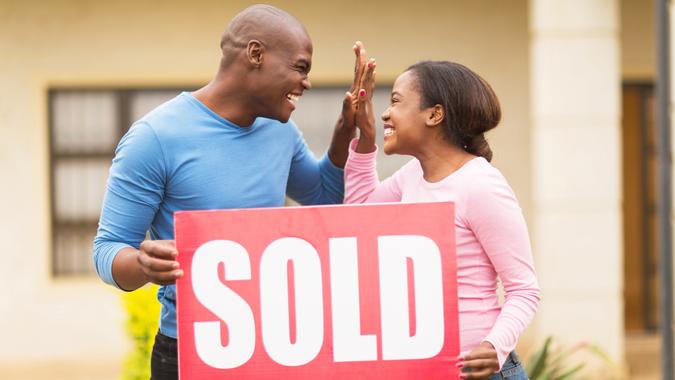 How to Get a Mortgage for $1 Million or More

How to get a million dollar loan for a home approved.