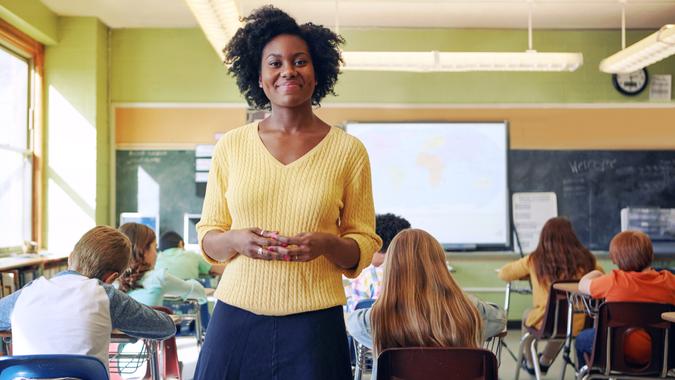 A Twitter post late last week from U.S. Secretary of Education Miguel Cardona has raised the hopes of thousands of teachers, nurses and other public servants that their federal student loan debts could be erased months or even years earlier than expected.

“Want some good news on this Friday night? Our first batch of PSLF emails regarding loan forgiveness have all gone out to those with Direct Consolidation Loans and certified employment – check your inboxes! And if you didn’t get one, hang tight! More are on the way.”

That was welcome news to a small portion of the nearly 45 million Americans struggling to pay back student loans, including hundreds of thousands of public servants who have had a hard time making sense of the Public Service Loan Forgiveness (PSLF) program. The problems with that program are so many and varied that the Education Department recently announced plans to overhaul it.

As GOBankingRates previously reported, the department said it will offer a time-limited waiver so that student borrowers can count payments from all federal loan programs or repayment plans toward forgiveness, including loan types and payment plans that were not previously eligible.

The limited waiver will help more than 550,000 borrowers who had previously consolidated their loans see progress toward PSLF grow automatically, with the average borrower receiving 23 additional payments.

Furthermore, the Education Department said it will “pursue opportunities” to automate PSLF eligibility, give borrowers a way to get errors corrected and make it easier for members of the military to get credit toward forgiveness while they serve.

Under PSLF, federal student loan borrowers can receive loan forgiveness in exchange for 10 years of work in public service, U.S. News & World Report noted on Wednesday. The problem is, many borrowers have been confused by some of the requirements. To qualify for the program, borrowers must have the right type of loan, be enrolled in a qualifying repayment plan, and make 120 qualifying on-time payments while also working full-time at a qualifying public service organization.

See: How Gen Z’s Future With Student Loan Debt Looks Compared to Millennials
Find: What To Do If You Can’t Afford Your Student Loan Payments

In some cases, borrowers were disqualified for being in the wrong repayment plan, or for having the wrong kind of loan. Under the new rules, those borrowers can now get credit for past payments.