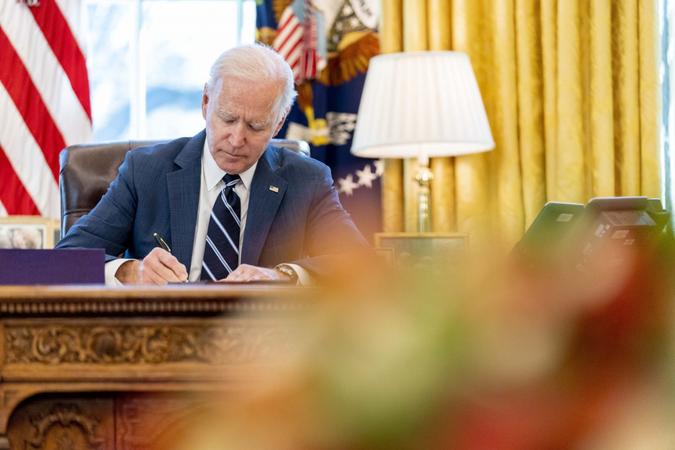 In his first few days in office, President Joe Biden signed multiple executive orders. But he made history today with an action that NBC News calls “his first legislative achievement.” He signed the $1.9 trillion stimulus bill that includes extended federal unemployment, child and child care tax credits, and another $1,400 in stimulus money for most Americans.

Talk Back: Do You Think the Minimum Wage Should Be $15? Take Our Poll
Learn More: The Financial Impacts of COVID-19 We Weren’t Expecting

The bill passed through Senate Tuesday by a narrow margin through a process called reconciliation. It then went back to the House for approval on Wednesday. CNBC had reported that Biden hoped to sign the American Rescue Act into law on Friday. Because Congress delivered the bill early, reports say, Biden was able to sign it ahead of schedule.

White House press secretary Jan Psaki said stimulus payments for taxpayers who are set up for direct deposit could appear in bank accounts as soon as this weekend, USA Today reports.

Biden to Speak of Hope, Work to be Done

Biden will speak to the American public at 8 p.m. ET Thursday for “roughly 20 minutes,” NBC News reports. His speech marks the first prime-time address to the American people from Biden since he became president. He will address the sacrifices Americans have made, the lives lost to COVID-19, and to communicate about the measures people must continue to take the defeat the virus, an administration official told NBC News.

On Wednesday, Biden said that there is “light at the end of this dark tunnel of the past year, but we cannot let our guard down now or assume that victory is inevitable,” NBC News reports.

Although the speech comes following a major legislative victory for Biden, NBC News says he does not plan to focus too heavily on the stimulus package tonight. Instead, he and Vice President Kamala Harris will embark upon a Victory Lap across the U.S. next week, NBC News reports.