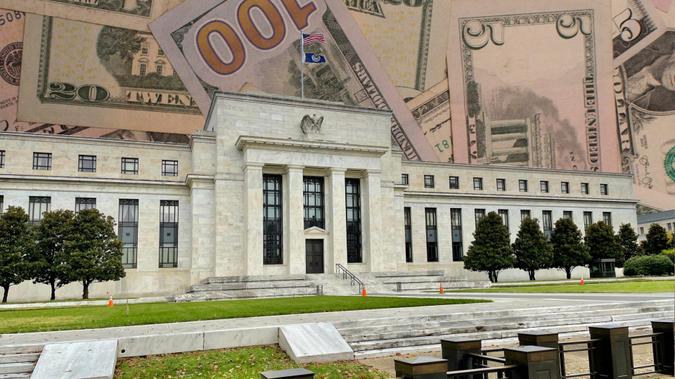 Federal Reserve Chairman Jerome Powell reiterated that aggressive rate hikes will need to be implemented and a half-percentage point interest rate hike may likely come at the Fed’s next meeting in May.

Read: 9 Bills You Should Never Put on Autopay
Learn: 6 Bad Habits That Hike Up Your Grocery Bill

“It is appropriate in my view to be moving a little more quickly to raise interest rates,” Powell said while part of an International Monetary Fund (IMF) panel on April 21, according to CNBC. “I also think there is something to be said for front-end loading any accommodation one thinks is appropriate…I would say 50 basis points will be on the table for the May meeting.”

Tim Holland, chief investment officer at Orion Advisor Solutions, told GOBankingRates that Powell has “pushed the door wide open for the Fed to go 50bps at its May meeting, an occurrence that the market has pretty much priced in.”

“The Fed’s tone has grown increasingly hawkish the past few months. We’ve seen that across the institution, including from governors that had previously adopted a more dovish stance,” he said, adding that as the Fed pushes monetary policy tighter, bond yields have backed up, equities have remained under pressure and the U.S. dollar has caught a bid.

“At some point and we think that moment is coming, Wall Street should grow more comfortable with the new monetary policy paradigm we have entered and U.S. stocks should catch a bid. On that point, Q1 earnings have come in fine, the U.S. yield curve has steepened (a harbinger of better economic times to come) and inflation looks to be peaking,” he added.

According to him, the US economy is strong enough to withstand higher rates and higher borrowing costs, and as investors grow more comfortable in the health of the economy that optimism should translate into higher stock prices.

With U.S. inflation at a 40-year high and in a highly anticipated move, on March 16 the Federal Reserve raised rates for the first time since 2018, by a quarter percentage point, or 25 basis points.

“The invasion of Ukraine by Russia is causing tremendous human and economic hardship. The implications for the U.S. economy are highly uncertain, but in the near term the invasion and related events are likely to create additional upward pressure on inflation and weigh on economic activity,” the Federal Open Market Committee (FOMC) said in a statement at the time, as GOBankingRates previously reported.

However, the minutes of the March 15-16 FOMC meeting released on April 6 showed that many participants noted that — with inflation well above the Committee’s objective, inflationary risks to the upside, and the federal funds rate well below participants’ estimates of its longer-run level — they would have preferred a half percent increase.

“Many participants noted that one or more 50 basis point increases in the target range could be appropriate at future meetings, particularly if inflation pressures remained elevated or intensified,” according to the meeting minutes.

Derek Izuel, chief investment officer of Shelton Capital Management, told GOBankingRates that while “this was pretty much baked into rates already,” Americans should not be surprised if talk starts about a 75bp rise.

Find Out: 20 Genius Things Mark Cuban Says To Do With Your Money
Discover: Rising Gas Prices: The True Cost of Going Electric

“Market is concerned that aggressive hikes will lead to a recession, given the track record of rate hike cycles leading to recessions [and] most of the time they do,” he said. “If the curve inverts, start looking for confirming evidence a recession is coming namely the ISM, Industrial Production, and employment statistics.”