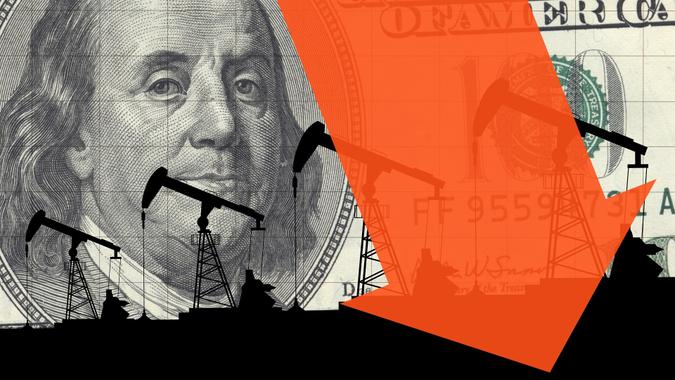 Oil prices fell to their lowest levels since January 2022 as a series of interest rate hikes around the world raised fears of a global recession, which would likely lead to lower demand for fuel.

See: Everything’s Bigger in Texas — Including Taxes, Which Are Outpacing California
Find: Unplug These Appliances That Hike Up Your Electricity Bill

The price of West Texas Intermediate sank below $80 a barrel on Sept. 23, setting the stage for a fourth straight week of declines, Bloomberg reported. The latest decline followed the Federal Reserve’s 0.75% interest rate hike earlier in the week — a move some observers took as a sign that the central bank is willing to tolerate a U.S. recession if it means finally reining in inflation. The U.K., Norway and South Africa also recently raised rates.

“The fears of a hard landing for the U.S. economy and across the global economy are working its way into the system,” John Kilduff, founding partner at Again Capital, told Bloomberg.

Meanwhile, a strengthening dollar continues to devalue other currencies, which further unsettles the global economy.

“The market is worried about growth and this is sending commodity prices down,” Ole Hansen, head of commodity strategy at Saxo Bank, said in an interview with The Wall Street Journal. “It’s a very bad cocktail of this and a stronger dollar.”

As Bloomberg noted, crude oil is now on track for its first quarterly loss in more than two years, pushed lower by the surging dollar. A continued decline in crude prices might push the Organization of Petroleum Exporting Countries (OPEC) to reduce its production, experts say. The market could be roiled further by the upcoming European Union ban on Russian oil — two developments that could push oil prices back up again.

Discover: 8 Purchases Retirees Almost Always Regret
More: What Is the Highest Income for Food Stamps in 2022?

JPMorgan Chase & Co. forecasts that Brent crude will rebound to $101 a barrel for the final quarter of 2022, while Goldman Sachs Group projects a price of $125 a barrel.

“This is going to be a very, very volatile last quarter,” Amrita Sen, chief oil analyst at Energy Aspects Ltd., said in a Bloomberg television interview.