Spring Break is Back, But Can You Afford to Travel? 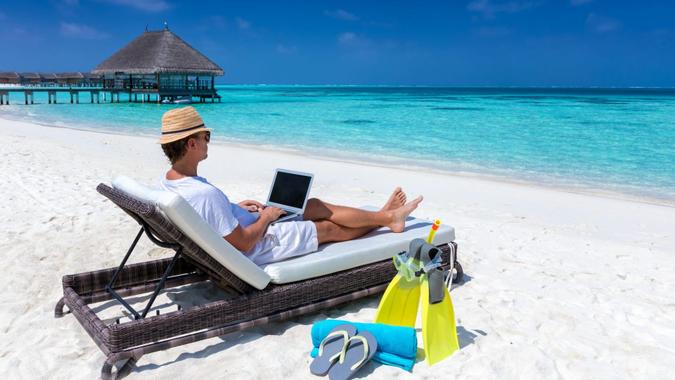 Spring break is so 2019 — or at least that’s how it probably seems to Americans who had to forego spring travel the past couple of years due to COVID-19. But now that the number of cases has dropped and most of the U.S. has eased COVID restrictions, millions of Americans are gearing for spring break travel again, if they can afford it.

See: 7 Best Scenic Train Trips for Travelers on Budgets
Find: American Credit Card Debt is So High Many Wish They Could Travel Back in Time to Fix It

Airfare and gasoline prices have hit their highest levels in years due to a combination of supply chain disruptions, pent-up demand and the impact of Russia’s invasion of Ukraine.

The average round-trip domestic airline ticket for the period from March 7 to March 21 costs $290 — up from $240 for the same period last year, The Los Angeles Times reported, citing data from Hopper. If you want to book at the last minute, you’re looking at an average round-trip ticket price of $365.

Once you get to your destination you can expect to pay more for lodging as well. The average hotel rate this spring break is $165 per night, up from $129 last year and $148 in 2020, according to Hopper. And in some places you’ll pay a lot more than that.

“I’m seeing hotel rates at over $1,000 a night for rooms that were less than $300 in 2019, and people are paying it,” Jay Johnson, president of Coastline Travel Group, told The L.A. Times. “Spring break is definitely back.”

Restaurant meal prices have also surged over the last year amid an overall spike in food costs — and those prices are probably going to keep rising. As GOBankingRates previously reported, food prices that are already at their highest point in more than a decade are set to push even higher amid a global shortage of fertilizer that has worsened since Russia invaded Ukraine.

But despite the rising costs, many folks are ready to plow ahead with travel plans. Nearly 40% of Americans plan to travel during spring break, up from 29% who said they were traveling for spring break 2021, according to a survey commissioned by Vacasa, a vacation rental company.

Vrbo, a home rental business, has reported a nearly 50% increase in demand for vacation homes this spring vs. the spring of 2021, The L.A. Times noted.

However, there still aren’t as many travelers now as there were before the pandemic. The number of domestic flights in the U.S. so far this year is 12% below what it was in 2019, according to Airlines for America. International flights are down 21% over the same time frame.