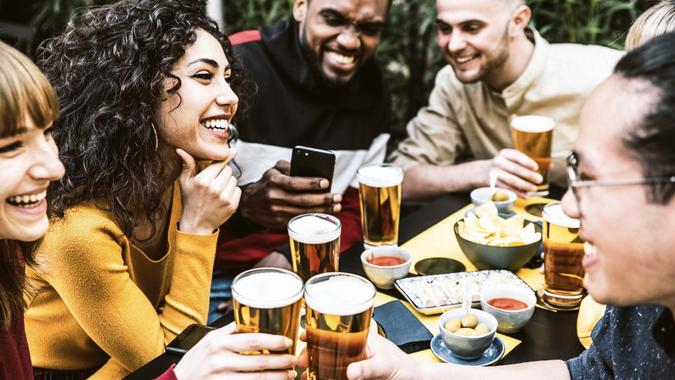 In the latest attempt to sway weary vaccine candidates, President Biden announced last week that Anheuser-Busch InBev will give away free beer in the latest bid to bribe Americans to get vaccinated. Other public officials have offered empanadas, guns and even cash to persuade citizens to get vaccinated, Bloomberg reports — and it’s working.

See: 8 Employers That Require Vaccines – Plus 16 More with Perks for Workers Who Get Their Shots
Find: How To Keep Supporting Your Local Small Businesses During COVID-19

Vaccination rates increased in the past month among young people aged 18 to 24, who are usually the group targeted by the incentives. Bloomberg adds that about 44% within said age group have now received at least the first dose of the vaccines, whereas only a month earlier that same rate was 34%.

West Virginia was one of the leading states in vaccine rollout speed and efficiency. Most recently, its vaccine gimmicks have garnered international attention. Early on, the state got a significant head start as it initially opted out of a program to vaccinate people in nursing homes and long-term care facilities, the NYT reports. The federal program partnered with Walgreens and CVS to deliver the shots in nursing homes throughout the U.S., but West Virginia’s geographical layout wasn’t conducive to the idea. Large stores and pharmacies were often miles away from residents tucked away in more remote areas and hills, and about half the state’s pharmacies were independently owned — so they pivoted. The state created its own network of pharmacies to distribute the shot, and as a result, finished its first round of jabs while many states still had yet to set up their first appointments.

Now, West Virginia is making headlines again as it goes full-bore with its vaccine offerings. From June 20 to August 4, it will give out $1 million and other prizes each week for those who receive their vaccine. Two grand prizes of nearly $1.6 million and $580,000 will be given away. Other prizes will also include two new custom-outfitted pickup trucks, 25 weekend getaways to local state parks, five lifetime hunting and fishing licenses, five custom hunting rifles and five custom hunting shotguns. If that wasn’t enough, two full four-year scholarships for any college or university in the state will be awarded to vaccinated 12-to-25-year olds, the New York Times reports.

Further north in Massachusetts, the young Latino neighborhood of Chelsea hosted a vaccination party in May for 120 people with music, empanadas and pupusas. And in Washington, they are offering speakers and gaming consoles as bribes for vaccines.

See: Should the COVID-19 Vaccine Be Required? Take Our Poll
Find: Are You Missing Out on Free Money? 80% of Americans Aren’t Taking Advantage of COVID Relief

Gratuitous vaccine incentive programs are seen in at least half a dozen states that have introduced cash lotteries for newly vaccinated people. Vaccination rates have greatly improved in the past months, with just over 52% of the population vaccinated, and 43% fully vaccinated. Creative and population-specific vaccination incentives could be supporting the positive trend towards eventual immunity.