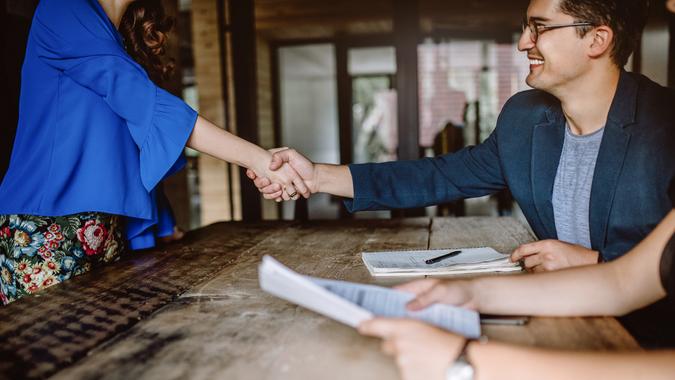 In the week ending January 22, the advance figure for seasonally adjusted initial claims was 260,000, a decrease of 30,000 from the previous week’s revised level, and the lowest level in four weeks, according to the Labor Department.

See: Want To Get a Raise? People With These 10 Jobs Are Most Likely To Get Promoted
Find: Thinking About Quitting? Retirement Mistakes to Avoid During the Great Resignation

The weekly figure is also below analysts’ estimates, which called for 265,000 applications, according to Bloomberg.

Ashley Paterson, CEO of Healthy Hippo Holdings, told GOBankingRates that despite the instability that we are seeing in the job market, she is hopeful.

“The pandemic has encouraged many eager entrepreneurs to open their own businesses which in return means more job opportunities for the younger generations and a wider range of industries that people can choose from,” Paterson said.

However, in a sign that The Great Resignation is still far from over, the number of Americans who quit their jobs in November hit a record high, with 4.5 million people leaving jobs. This follows October’s 4.2 million quits, according to the Labor Department’s Job Openings and Labor Turnover Survey (JOLTS) report that came out on Jan. 4, as GOBankingRates previously reported.

See: Nearly Half of Jobs Will Remain Hybrid or Remote Post-COVID, New Survey Says
Find: 45 Jobs That Can Make You a Millionaire Before Retirement

“Employers are still doing a lot to try to keep workers on staff because they know it’s hard to hire right now,” Aaron Sojourner, an economist at the University of Minnesota told The Wall Street Journal,  describing employees unexpectedly missing work because of COVID-19 as the biggest consequence of the surge in cases.